Good Week For: The Social Good

In just two weeks after the Ice Bucket Challenge first went viral, over 150,000 people have donated close to $7 million to the ALS Association for Lou Gehrig’s disease research, compared to $1.4 million in the same period last year.

This is one of those rare examples of social media used for social good. But, unlike the #nomakeupselfie viral campaign that raised only $10,000 here for the Canadian Cancer Society, while £8 million was raised for cancer research in the UK in just six days back in March. Or the ill-fated Neknominate craze, that caught on worldwide but led to several deaths due to promoting excessive drinking, and thankfully evolved into a pay-it-forward nomination game to help those less fortunate, this icy challenge has been given a warm reception across Canada.

So far, everyone from local celebs like The Whitecaps’ legend Carl Valentine, to Canada’s U-20 Women’s soccer team, and the one and only Rob Ford, have joined the likes of Jimmy Fallon, Bill Gates, Mark Zuckerberg and Martha Stewart to dump ice on their heads, all for a good cause.

While there’s debate as to the origins of the campaign, with critics arguing that the social media element is narcissistic and philanthropy should be humble in its very essence, we here at VcB say cool your jets, man! This harmless bit of fun raises awareness to fight a deadly disease, and there’s so much misery around these days that we could all use a bit of cooling off.

Bad Week For: The Entertainment World

Speaking of, the talk of the town this week was the tragic loss of everyone’s favourite funnyman, Robin Williams. The online reaction to his untimely death was unprecedented, partly due to its nature and the fact that there seemed to be no warning. At least from Hollywood’s standpoint. Robin’s death shone a light on mental health awareness and the fact that no-one ever knows what goes on behind the curtain, even for those who seem to have it all.

While Robin’s suicide jarred several generations – from the early Mork & Mindy days, to kids’ classic, Night At The Museum – although it’s morbid to think, one can’t help but lament the sad reality that many of our generation’s greats will soon be no more.

Still, to think Robin’s ‘Aladdin’ quote has inspired Syrian rebels in their cause quickly puts everything back into perspective. And his famous tribute to Canada – “You are the kindest country in the world. You are like a really nice apartment over a meth lab” – all the more poignant. 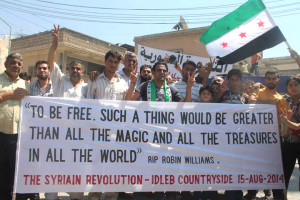