A baby boy – not even 12 weeks old – was found abandoned last week in a box in an apartment building in the Russian town of Obinsk. Even though he was found with a bag of food and diapers, he may not have survived had it not been for the well known building cat, Masha, who curled herself around the baby for hours to keep it warm and was too worried to let it go. Residents were led to the baby by her cries, after which the child was rushed to a nearby hospital. Read more 24 years after four year-old Sun Bin was abducted from a vegetable market in his hometown of Sichuan province by child traffickers, he was reunited with his father and met his younger sister for the first time last week. After being adopted and trying to reach out to find his original family, he left a DNA sample with a local police station in Jiangsu in October, and was called in January when a match was found. Read more

Two transgendered women filed a petition with Israel’s High Court of Justice demanding this: that they undergo sex-change surgery as a condition for altering the gender on their identity cards from male to female. Both were allowed to change their names on their identity cards, but not their gender designation. However, the State Prosecution announced last week that it will now be possible to change the gender designation on one’s identity card without actually having a sex-change operation, in a surprising but positive move. Read more

Last week, 24-year-old Larkin became the first person in Michigan to walk out of a hospital with an entirely artificial heat. Wearable technology allows a patient with a total artificial heart to wait at home for a heart transplant, making it the latest milestone in efforts to replace the failing heart as heart disease rises, and donor hearts remain scarce. 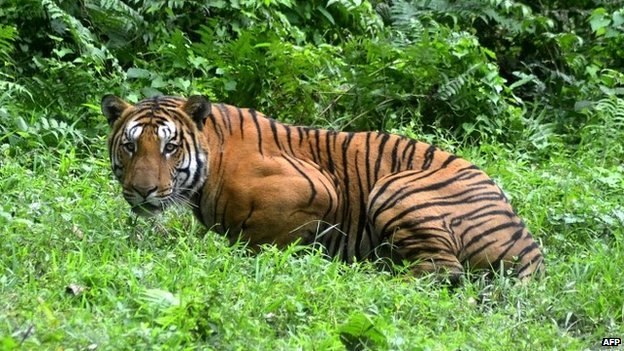 Presenting the findings of the latest tiger census, India’s Environment Minister Prakash Javadekar said the tiger population had risen from 1,706 in 2011 to 2,226 in 2014, owing to more streamlining of government initiatives for tiger conservation. India says it now has almost a third more tigers than it did four years ago – given that it is home to 70% of the world’s tigers, this is an incredibly promising development. Read more

Instead of a traditional baby photo to announce a new child, Alabama couple Cara and Eric Taylor announced their desire to adopt in 2015 with this holiday card. “To me, sitting there with a little sign saying ‘We are adopting’ just didn’t’ do it. We wanted to bring attention to the foster care system as well, so that’s why we created it the way we did with all the little shoes,” Cara said. She shared it with Together We Rise, a nonprofit dedicated to improving the lives of children in foster care, after which the image went viral in recent weeks. Read more

7. Teen’s balloon to late father gets response from nearby city

Every year, 16-year-old Ashlynn Marracino releases a balloon in memory of her late father on his birthday, January 6th. He died of a brain aneurysm in 2008 and just like previous years, this year she released one telling him how much she loves and misses him. What she didn’t expect, however, is for it to land near people in Auburn, California that were so touched by her note, they set up a Pay It Forward in Auburn Facebook page, where local residents were quick to offer notes of encouragement and gifts to the girl who misses her father. Read more

Three-year-old girls Violet and Juniper first met in November 2013, when they were both battling retinoblastoma, a form of cancer in the retina, at Seattle Children’s Hospital. Quickly bonding over their love for Disney characters, Violet got her wish in December 2014 thanks to the Make-A-Wish Foundation. This year, Juniper is going to Disneyland too – and Violet expresses how happy she is for Juniper and how much she loves her in this touching video.

Mohammad Diab, MD, and his longtime patient, 23 year-old Carol Tran, are working together to design an app that helps sufferers of scoliosis parse through some of the more difficult aspects of pre- and post-operation life. Dr. Diab said it’s been a great reward, treating Tran as a child and watching her recover. Tran is now spending a “gap year” between college and graduate school, working as an intern for him. Read more