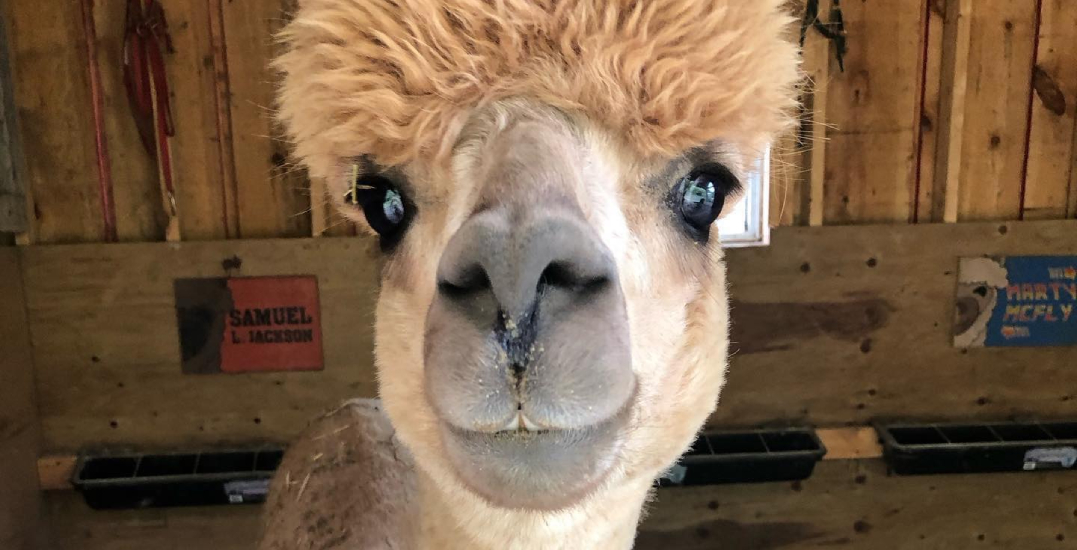 Marty the alpaca (OUR alpaca FARM)

While the pandemic motivated many to re-examine their life priorities, deboraH and WADe Clarke had decided what they wanted before COVID-19 arrived (They capitalize their names this way intentionally. As creative, artistic professionals before they met, each had separately chosen alternative capitalizations for their names. They were clearly meant to be!).

As a couple, they had always known one day they’d live in a country setting, perhaps on a hobby farm with some animals.

In 2019, they began to feel claustrophobic with a lack of privacy and limited open land to enjoy nature in their Oshawa, Ontario subdivision. It took them six months to find the 9-acre property with a 180-year-old home near Port Hope, Ontario that was perfect enough to also fulfil one of deboraH’s dreams: having their own alpacas.

Since moving their family of three teenaged sons to their rural oasis, the couple has done extensive work on their land to ensure the care and safety of their first three male alpacas: Samuel L. Jackson named for their love of the actor, particularly in the film “Pulp Fiction,” Mr. Peterman, named after the character of Elaine’s boss in the “Seinfeld” sitcom, and Marty McFly from the classic “Back to the Future” movies.

They’ve purchased all of the herd from Arriba Linea Alpacas in nearby Lindsay, Ontario and deboraH credits the farm’s owner Lori Jones with being her go-to source of alpaca expertise when deboraH’s own extensive research just needs someone with hands-on experience to assure them. 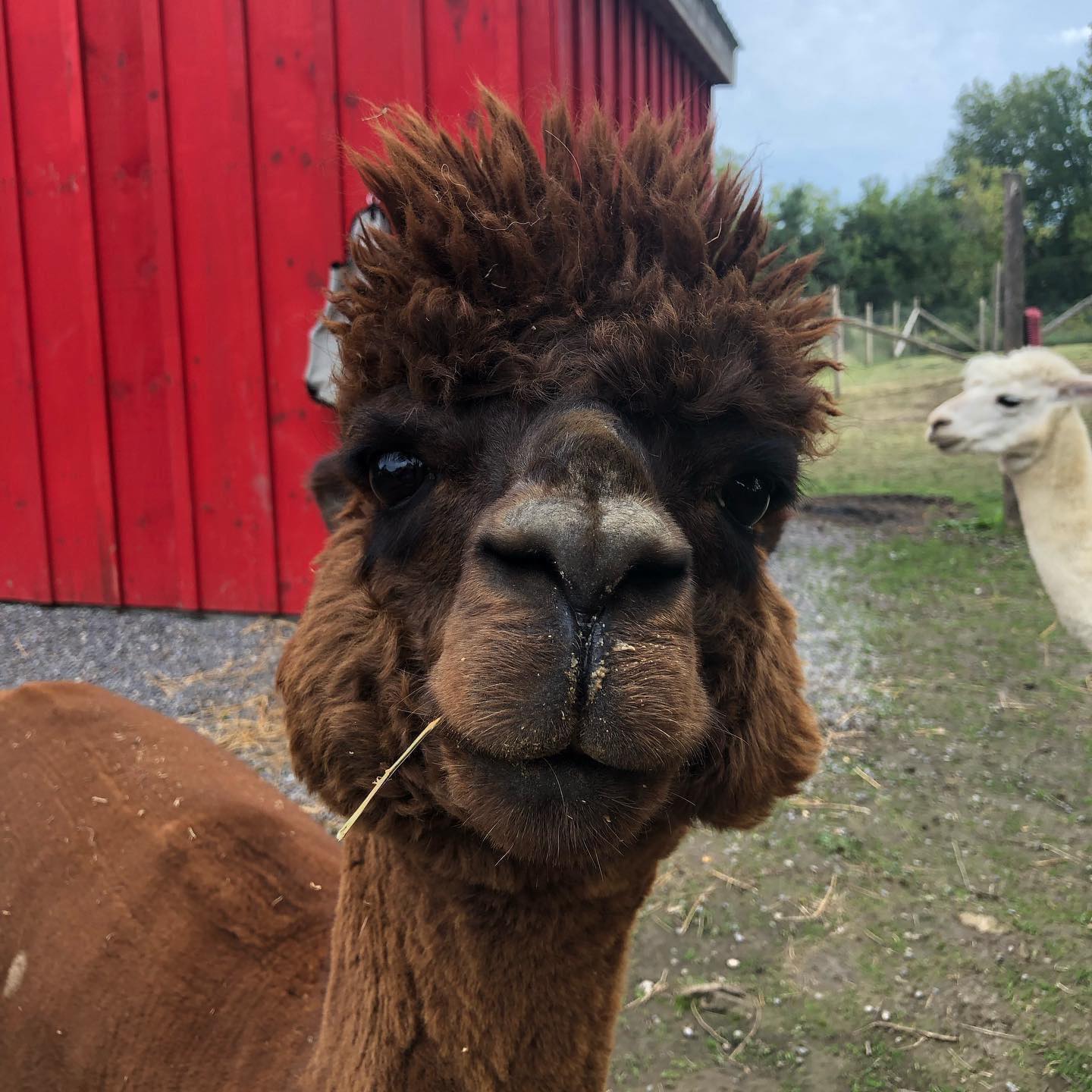 Samuel the alpaca (OUR alpaca FARM)

These affable and fascinating characters are quirky in more than just name, however. Their personalities are every bit as unique and interesting, as you can tell simply by watching the videos shared by the couple on their “OUR alpaca FARM” Facebook page.

Samuel, at 4, is the oldest of the pack, and seems to know it with his sometimes bossy, opinionated and grumpy “alpha male” personality that can also be sweet and affectionate. He comes when called (they all know their names!) and he loves morning chin rubs and hugs with some hand-fed hay.

Marty, Samuel’s younger brother, is a gentle giant as the physically-largest of the crew. He adores Mr. Peterman and has an agreeable disposition with everyone. Marty is the only one of the adults that babies Jeff and Newman are safe with, as alpacas enjoy jumping on one another for play or dominance. (The youngest two need to be larger in size before they can join the older pack as there’s a risk of their spines breaking from the 80-pound size difference between the adults and babies.)

Mr. Peterman may be the comedian of the herd with his frequent vocalizing with moans full of annoyance, his antics (he has an ongoing issue with pooping in the barn where the three adults sleep) and a strong personality that sometimes engages in counter- bossiness by standing up to Samuel. His white fur is never clean from his love of rolling in dirt.

“It took eight months before Mr. Peterman would allow me to hug him,” explained deboraH. “Perhaps because his mother died after he was born on a farm out west and he was shipped to another Ontario farm to be cared for by humans and adoptive alpaca moms before we got him.” 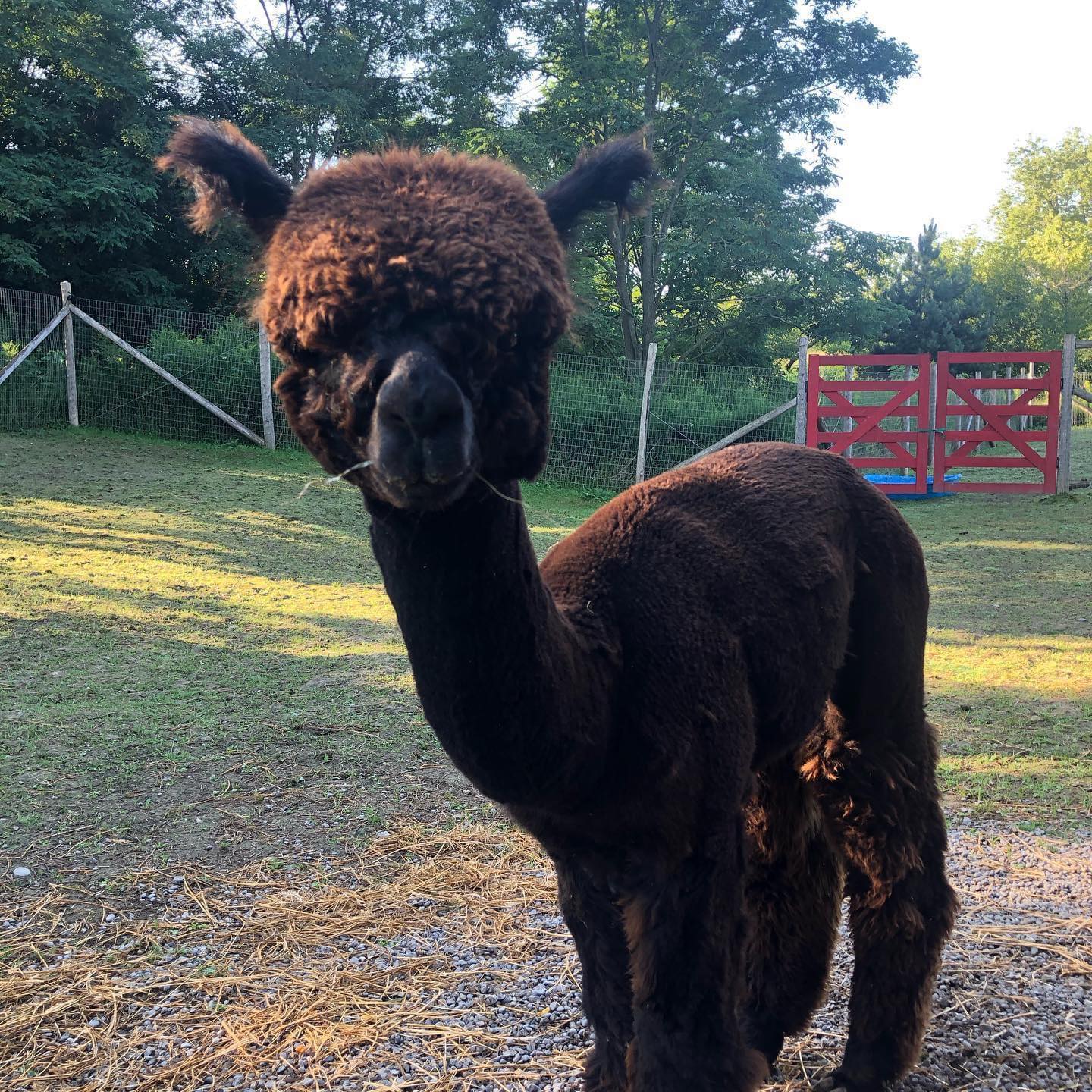 Newman the alpaca (OUR alpaca FARM)

As for little Newman and Jeff, their personalities haven’t fully emerged yet, says deboraH. Because babies can’t be together with adults and alpacas are herd animals that can’t be kept as solitary creatures, she let Newman pick his best friend Jeff to join him.

Newman appears to be gentle and submissive and enjoys visiting the big guys through the fence separating the age groups. Jeff is very playful and friendly but still a bit shy and melts deboraH’s heart with his gorgeous long eyelashes.

“Alpacas do a hop-kick movement called pronking,” WADe shared, “which is an expression of happiness – like skipping – that Jeff is found doing quite a bit in the pasture, especially around dusk.”

It’s clear that these animals bring so much joy, but they sometimes have their moods as well. Although both deboraH and WADe didn’t want to focus on what they say happens only once in a while, they confirmed that the alpacas at “OUR alpaca FARM” do, in fact, spit on them occasionally, like camelid family members camels and llamas. It’s not a regular habit, but similar to the hissing or growling of a pet cat, it often serves as a warning that an alpaca is growing frustrated or afraid. It’s more often used to deter other alpacas away from food.

These alpacas are also sensitive to their humans’ moods and can show signs of grumpiness themselves if deboraH or WADe visit them wearing their own hearts on their sleeves during a mad or sad moment. This herd is one that gives back all the happiness and joy bestowed on them by their loving human keepers. 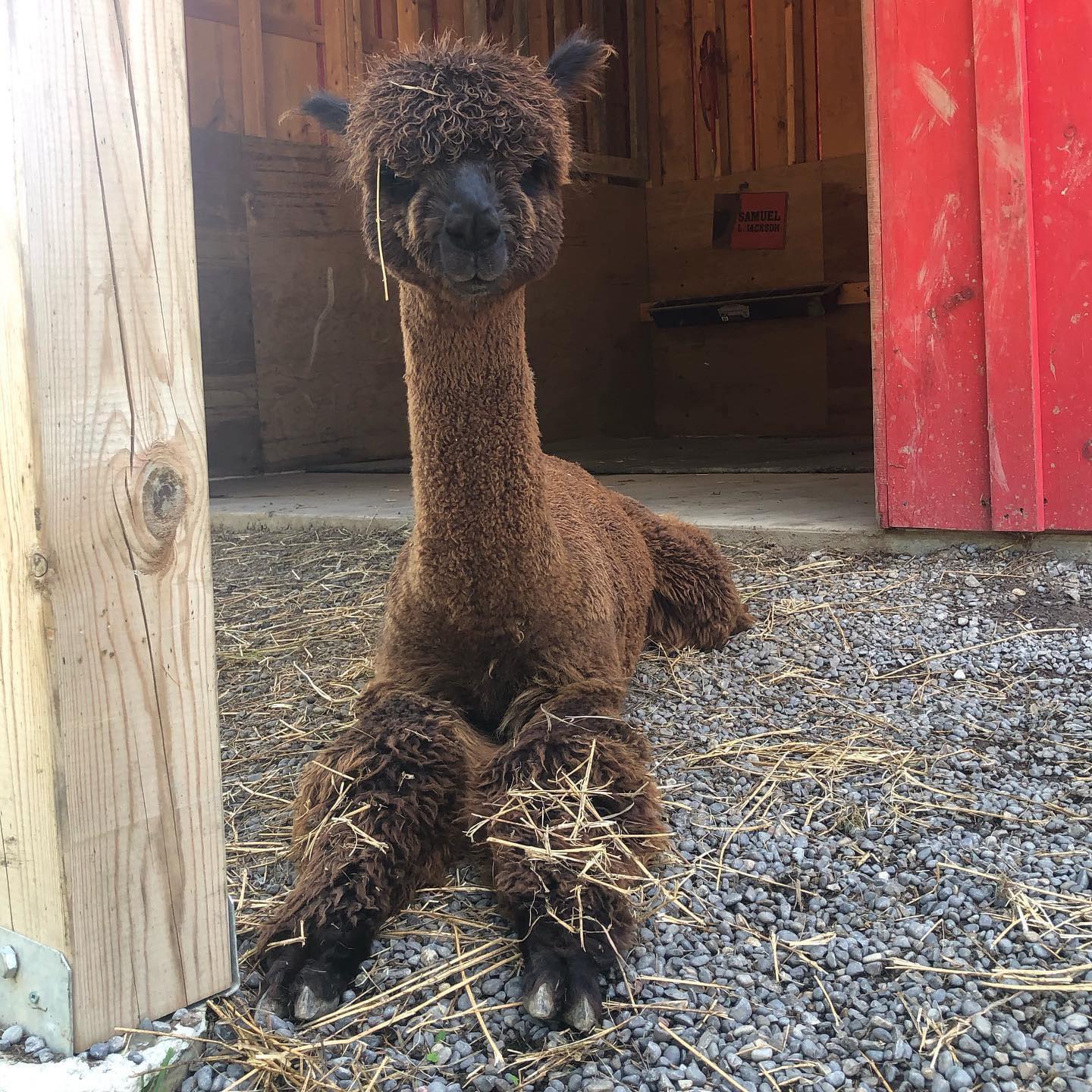 Jeff the alpaca (OUR alpaca FARM)

As with all pets big or small, upkeep and care keep the couple busy as well. Despite their efforts, the grass feeding pasture isn’t growing as deboraH and WADe had hoped, so they supplement grazing with hay and hope to clear another pasture soon. Alpacas are herbivores with three stomach compartments who also chew their cud (regurgitated, partially-digested food) like cows for maximum absorption of nutrients.

The couple doesn’t own any farming equipment yet (deboraH dreams of owning a tractor one day) so everything they clear and build is by hand, with occasional help. Their two younger sons don’t have an active interest in the farm, but their oldest son, now 18 and attending college, is beginning to appreciate nature a bit more and help out with the alpacas’ care.

While the cost so far has been manageable with income from their 20-year media business, “Hornet Media”, and their work as professors at a nearby college, WADe and deboraH would like the farm to become financially self-sufficient eventually. 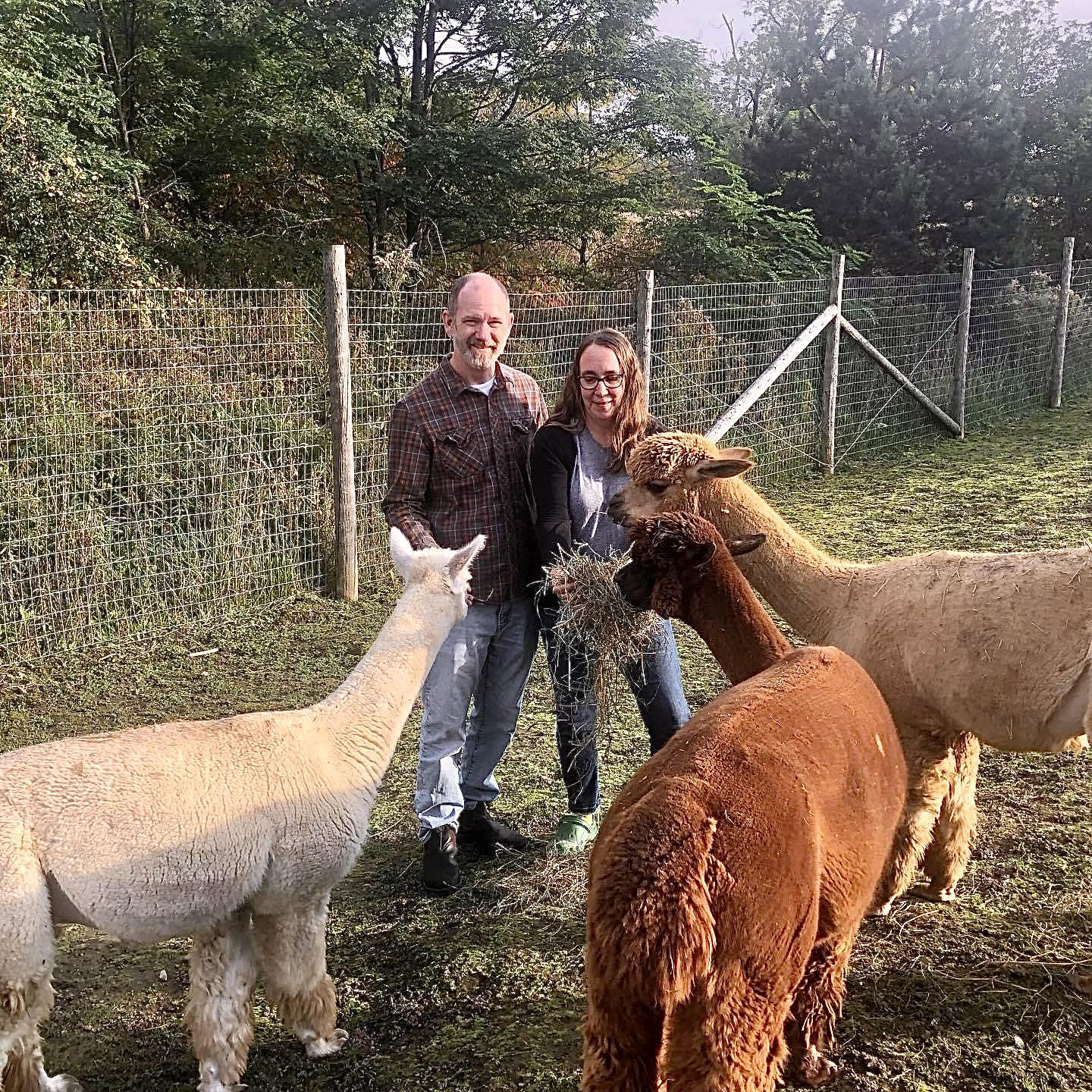 WADe and deboraH with their alpacas (OUR alpaca FARM)

They don’t plan at this time to open to the public, but their Facebook page and farm website capitalizes on their artistic and graphic design backgrounds by selling home-made greeting cards which incorporate partially-processed fibre from their alpacas. They also use the fibre to create and sell dryer balls and cat toys at small local businesses and seasonal craft markets, like the upcoming Port Hope Makers’ Market.

The couple decided early not to raise alpacas for breeding or for textile fibre. Females have roughly an eleven-month gestation period, give birth to only one baby at a time, and must be kept separate from males until they’re ready to breed, which requires a full duplicate, gender-based farm. As for shearing fibre for profit, it takes many alpacas to provide enough fibre, and that fibre must be processed before it’s ready for making garments or blankets. OUR alpaca FARM outsources the annual late spring shearing, as not surprisingly, alpacas aren’t willing participants and require an expert to restrain and shear the animals. 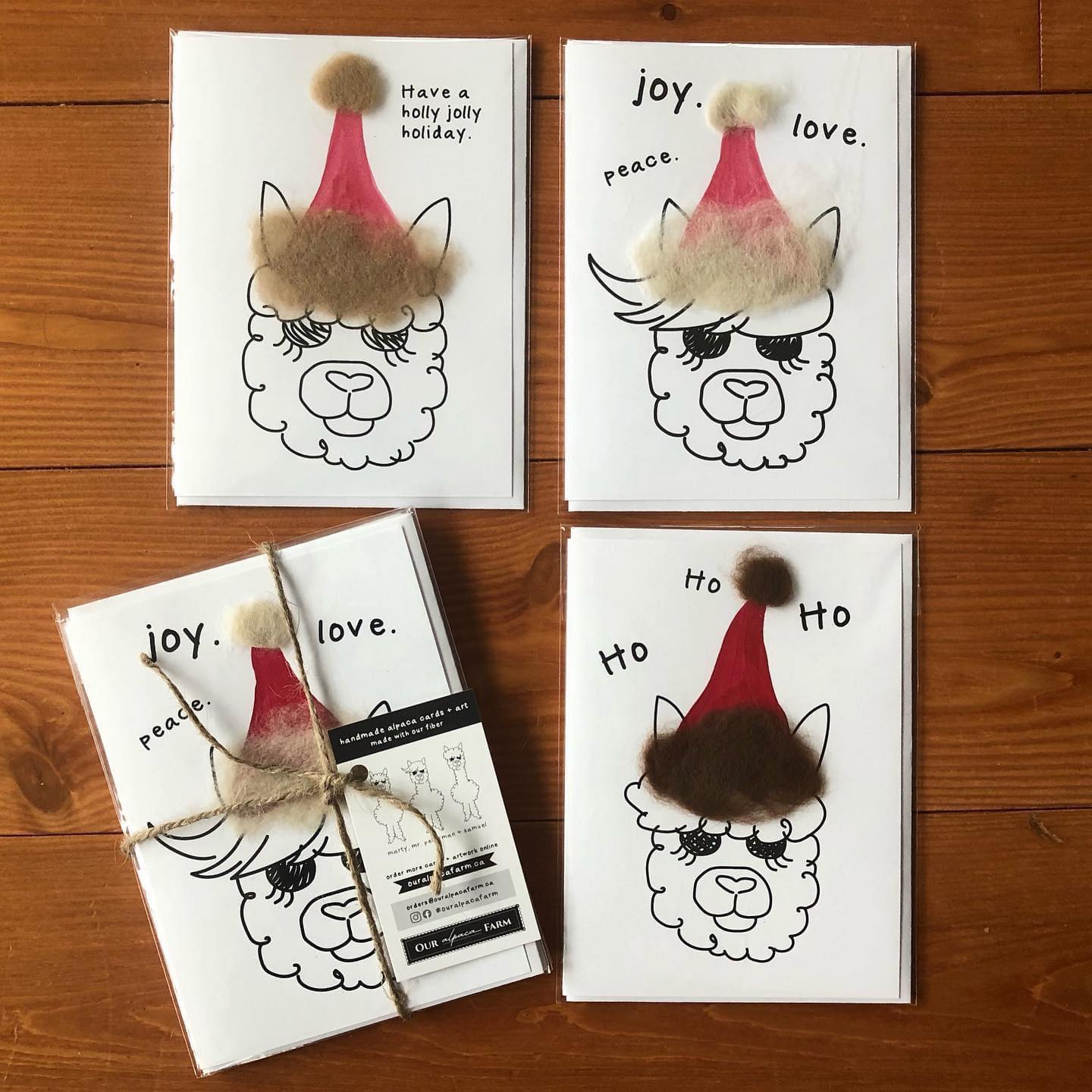 However, deboraH and WADe have capitalized on their alpacas in a most environmentally-friendly way; they collect and sell their poop as fertilizer. Apparently, alpaca dung is one of the best natural fertilizers for all kinds of gardening, including flowers, plants and food, which they also grow for their family’s consumption. Alpaca poop is better than cow, sheep or goat manure because it doesn’t need to be aged, has lower nitrogen levels, is virtually odorless and the bean-shaped drops makes it easier to spread and be absorbed. There’s also a kit sold by the farm to make alpaca poop tea for indoor house plants to give them a healthier, cleaner boost than chemical fertilizers.

For now, deboraH and WADe are simply revelling in establishing relationships with these intriguing creatures. It’s clear this family has a love of all animals, as they also have two dogs, four cats, two bunnies, a turtle, six chickens and one rooster named Anthony who showed up crowing one day in late August and has become a permanent resident in the new house WADe built for him after unsuccessfully searching for his owner. With alpaca farms increasing in numbers all over North America, Old MacDonald may soon need to add a new line.