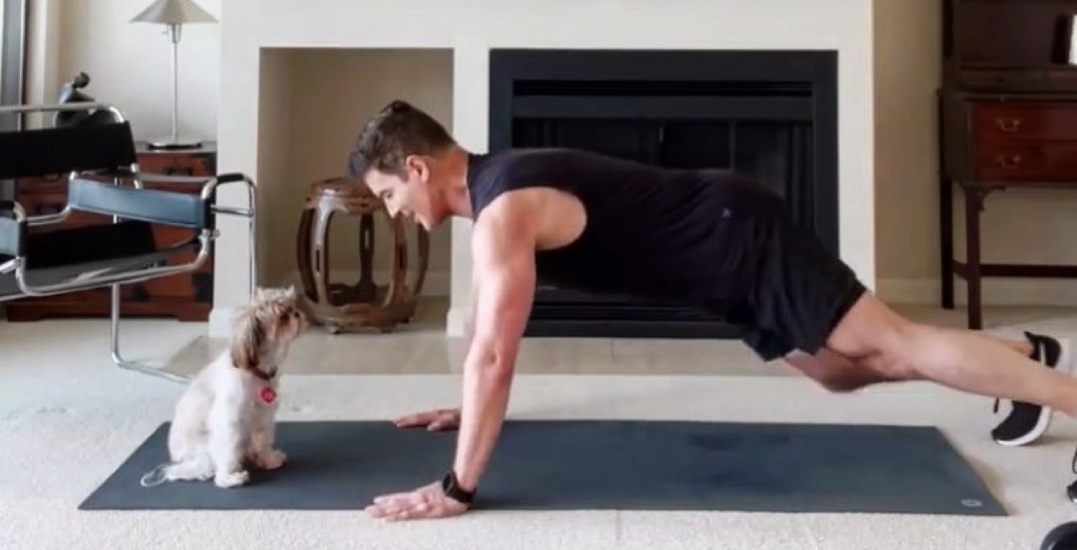 Geoff and his dog Gemma working out (@geoffbagshaw)

Written for Daily Hive by Caleigh Alleyne, a Toronto-based journalist and media consultant.

Geoff Bagshaw’s pre-pandemic daily schedule was hectic, never-ending — and he loved every minute of it.

“Fitness is not a nine to five job. I was regularly at work from 6 am until 7 pm. I often had up to 45 people in my classes, but I loved the energy,” he told Daily Hive.

As a full-time manager at Equinox Fitness Club in Vancouver, Bagshaw worked with a team of 30 instructors, overseeing more than 130 classes a week as well as instructing over 10 classes a week.

Like many of us, he never expected the pandemic to be a lengthy disruption. “After we shut down in March 2020, I anticipated it might be a few weeks, so I decided to post online that I would do a workout on Instagram.”

Bagshaw felt unsure, despite his experience, to teach in a new way. “I was intimidated, I’d never done anything on Instagram Live.”

With a positive response to his first Insta-live workout, Bagshaw persisted, teaching and planning online workouts as he would in-person classes, switching focus from high interval to legs, upper body to core. The online response helped him continue as the pandemic dominated the world’s attention. “After each class, I would get at least 100 new followers.”

The welcome habit of #WorkoutWithGeoff daily classes led to his online mailboxes filled with a steady stream of positive and thankful messages from places around the globe like England, Brazil, New York City, Los Angeles, and Toronto. And a silver lining: reconnecting with friends and acquaintances from his past stints teaching in Toronto and across the USA. 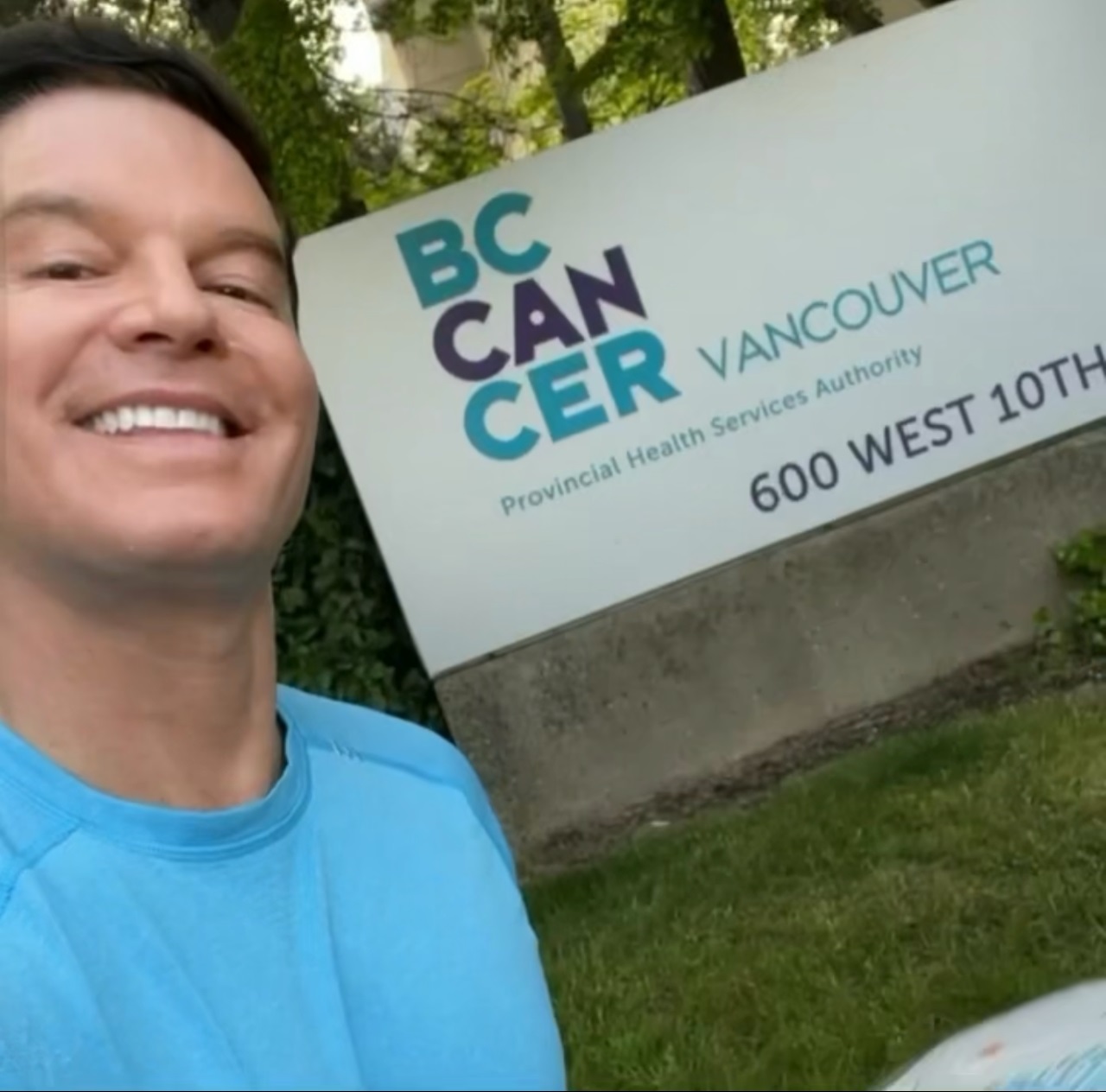 Geoff at the BC Cancer Agency (@geoffbagshaw)

Last year, Bagshaw decided to raise money for the BC Cancer Foundation, supporting their May challenge initiative to “Workout to Conquer Cancer” every day. Grateful to be employed, he wanted to do something for the community. “We put together a team of 25 people and raised $38,000 during May 2020.”

Anneke van Alderwegen of Victoria, BC is one of the #WorkoutWithGeoff faithful.  She had attended workshops with Bagshaw pre-pandemic and was excited to try an online workout, something new for her at the beginning of the pandemic.

“I followed Geoff on Instagram, so when I saw him post about the workouts, I started doing them in early April,” explained van Alderwegen. “Even though with the live workouts you were by yourself, there was a global village feeling during classes — that was really cool.”

In June 2020, Baghshaw returned to in-person classes, helping club members adjust to the new protocols of hygiene and keeping socially distanced. But six months later, another wave of increased coronavirus cases led to the club closing its doors again, and Bagshaw returned to his online community immediately. But there were many days it was hard to show up. “I was committed to them, to keep them on track. They supported me so much.”

In December 2020, he launched another fundraiser for the BC Cancer Foundation, raising $30,000 while also engaging his fitness fans with celebratory themes for classes like Christmas, New Year’s, and Valentine’s Day. His followers kept increasing, no surprise to van Alderwegen. “I never would have expected I would like doing a workout in my house by myself.  I really loved it. Geoff made it so accessible.”

Like all those in the #WorkoutWithGeoff family, van Alderwegen was thrilled to have the 5:30 pm online class in her schedule and appreciated Bagshaw’s commitment. “Geoff’s a professional and so lovely. He made suggestions on how to adapt the workouts to your level and offered tips on substitutions like using laundry detergent bottles or soup cans instead of weights.” 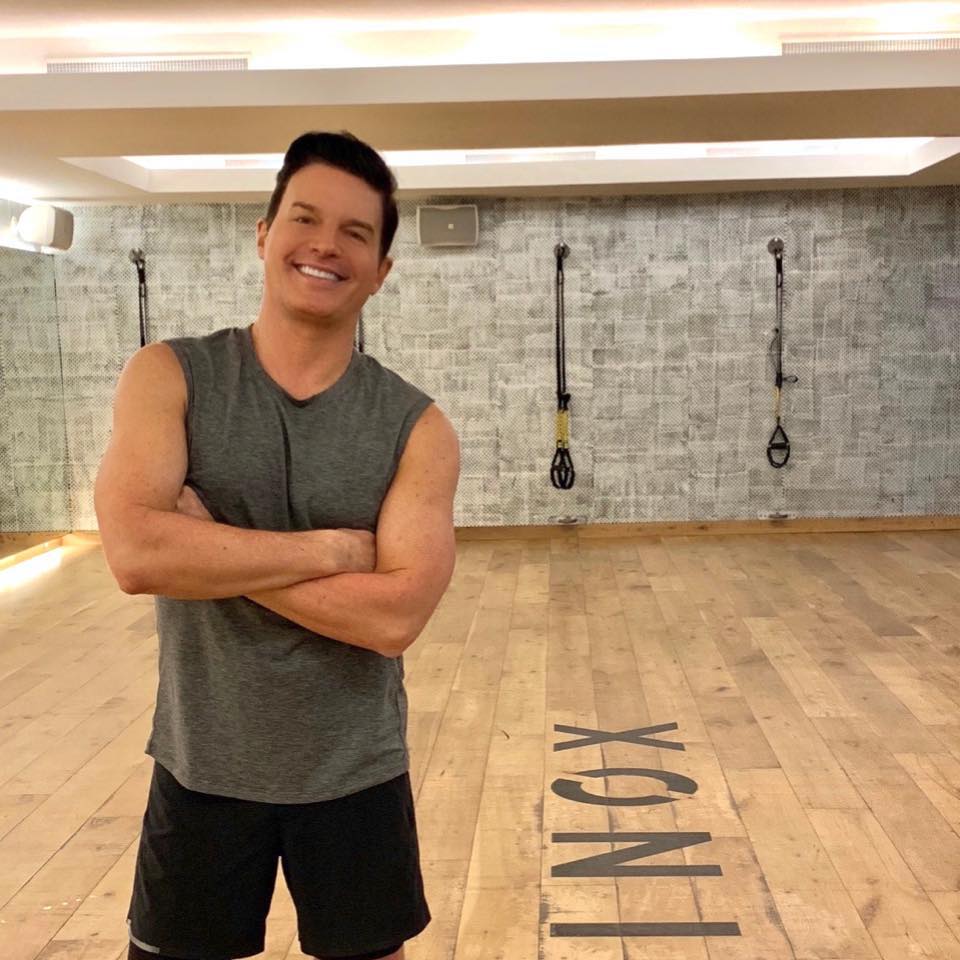 In May, Bagshaw kicked off #WorkoutwithUs again, this time with a team of 90 and raising $45,000 for the BC Cancer Foundation, resulting in him becoming one of the top five fundraisers for this year’s campaign. May 31 was the end of the fundraising challenge, but it also marked the end of online classes again, as Bagshaw returned in-house at Equinox.

“The last online class was super energetic. During the final stretch, I went through a tsunami of emotion…the cumulative effect of the last 15 months,” said Bagshaw. “It was a tearfest!”

van Alderwegen echoed the shared sentiment of joy and gratitude. “It was fantastic to see a man show his emotions. We were all crying.”

#WorkoutWithGeoff has resulted in 10.5k followers @geoffbagshaw and an online legacy of 150-plus classes available to anyone, but Bagshaw is most proud of his commitment to his new hybrid work model of fitness and charity. “I don’t know how we raised money in a pandemic, but we did.”