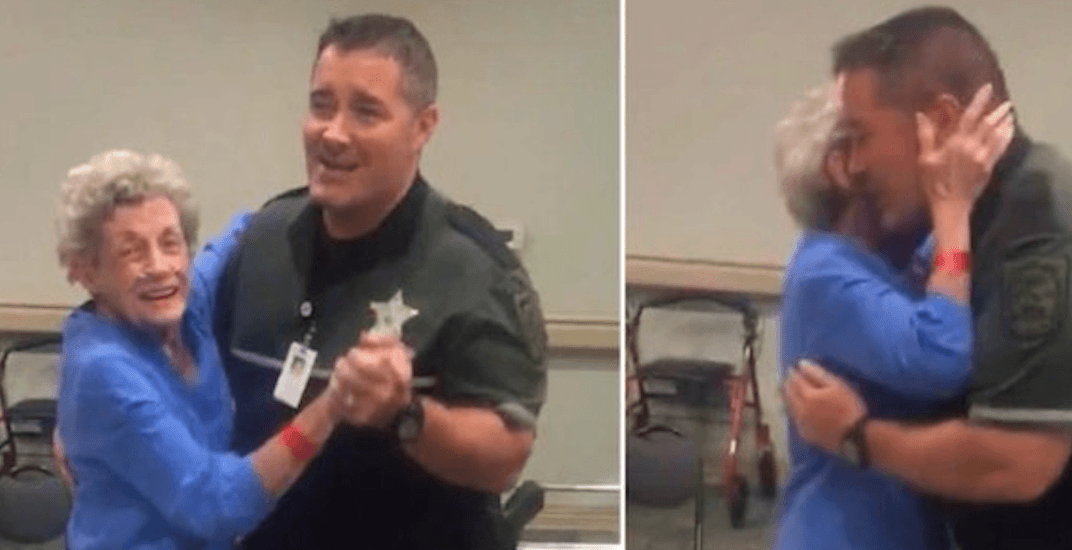 This police officer was stationed at a hurricane shelter in Florida to watch over families impacted by Hurricane Irma. One of the evacuees was an old woman who looked frightened and alone. The officer decided to cheer her up with a dance and the heartwarming moment was captured on camera.

Coyote gets hit on Alberta highway and safely hitches a ride for 30 km https://t.co/lW472YuGjJ pic.twitter.com/Ck7jRtOiQs

Little did Knox know that the furry traveler was along on the commute, and made it all the way to Calgary where a construction worker alerted Knox of the coyote in her vehicle.

“Upon stopping at a traffic light by my work, a construction woman notified me that there was, in fact, a coyote still embedded in my car. When I got out to look, this poor little guy was looking up and blinking at me,” Knox wrote in the post.

This deer fell into a mud pit but luckily rescuers were able to use an excavator to safely get it out.

4. Dog saves stranded earthworms by gently lifting them onto grass

This two-year-old pup named Holliday loves saving earthworms she finds on the pavement by moving them onto the grass.

“She gently picks them up in her mouth and then carries them over to the grass,” said her owner Caitlyn Beebe.

“On walks, she will run around the neighborhood and look for stray earth worms and bugs to save. She will spot the worms far in advance, and run over as fast as she can to save them. Sometimes, she even tries to save the dried, dead ones.”

Maybe your dorm room doesn’t allow pets… or you’re baby-stepping your way towards the full-time commitment of dog ownership… or maybe, you just can’t ever have enough furry friends in your life. Regardless of your reasons, this new web service will let you borrow a dog.

It’s free for dog owners looking to share the love by loaning out their pets, and for dog-lovers, the first dog is free while premium membership allowing for unlimited dog walks costs $9.99 per month.

This baby seal was abandoned by her mother on the beach and rescuers scaled a cliff to save it. The rescuers then scaled back up the cliff with the baby seal, bringing it to a rescue facility.

Earlier this summer, an early morning break and enter led to the stabbing of a K9 police dog, and a brave pup named Jester was taken to an emergency veterinary hospital for life threatening wounds.

On July 30, Jester received multiple stab wounds to the head after chasing down a suspect, and his condition was deemed life-threatening.

“Jester’s injuries have healed and he has undergone a series of tests—medical, physical and mental—to ensure he is healthy and ready to begin serving the citizens of Calgary again,” the post read.

Jester will be back to work soon, and out there keeping Calgary safe.

It may not have gone as planned, but in the end everyone involved turned out to be just fine.

Carolina Villagra of BC had planned for a hospital birth for a first-time mother with two Doulas, but things didn’t exactly turn out that way.

On Monday, September 11, after she experienced contractions, Villagra’s family took her to hospital, but the expectant mother was ultimately sent home.

Back at home with one of the Doulas, the Villagra family simply waited for the Doula to give the go-ahead that Carolina was in active labour, so she could be admitted back to the hospital.

All of sudden Carolina yelled in pain, adding that she felt like she had to go to the washroom. Responding to her her request one of the Doulas attended to Carolina, and at that point, both realized the baby was in fact, on the way.

At that point, the Doula yelled for Carolina’s father to call 911. It was about five minutes later when two Burnaby paramedics arrived, and at that point the baby was delivered in the washroom of the apartment where the family had gathered.

The new baby and the new mom were then taken to Burnaby Hospital where they are currently recovering.

9.  Girls love watching their dog jump on the bed

These little girls think that their dog jumping on the bed is the best thing ever and it makes for a very cute video.