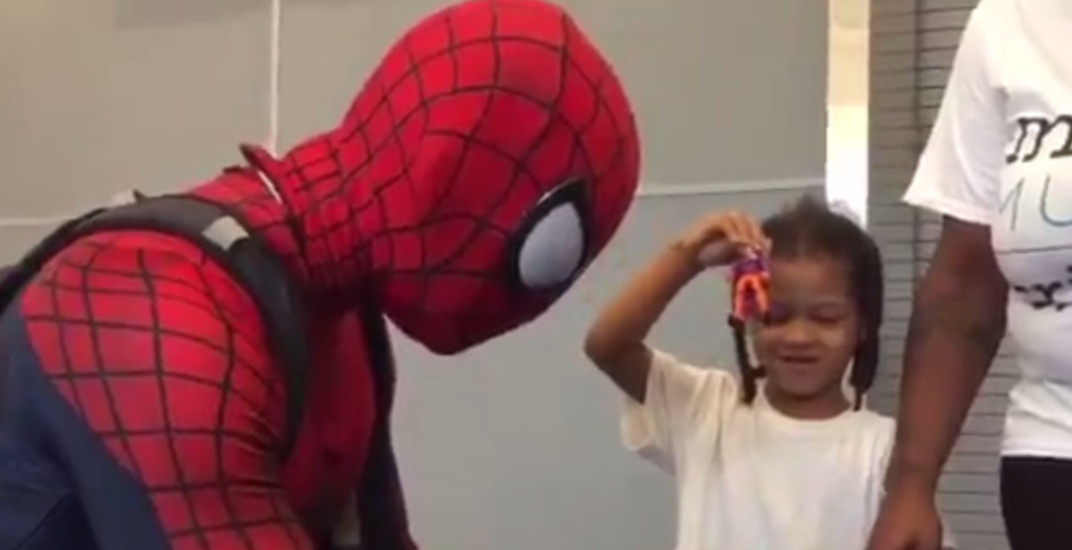 Leave it to a Canadian to get creative and turn tobogganing into a summer activity.

That’s exactly what Chris Bear of Saskatchewan did.

Bear took his toboggan and decided to make it into a wakeboard just for the heck of it. What else are you going to do with a toboggan when there’s no snow?

By the looks of it, toboggans aren’t bad on the water.

And this one. These videos courtesy of @RobbieVaughn79 are priceless: pic.twitter.com/DARkwFmaAy

Spiderman put a smile on the faces of kids staying at a Houston shelter after Hurricane Harvey destroyed their homes.

The person dressed up as Spider-man and visited as many kids as they could, bringing smiles to all of their faces.

3.  Baby gets baptized in Stanley Cup

This amazing video shows an interview with a Hurricane Harvey survivor, who lost everything, find out that his father survived the storm.

Aaron Mitchell broke into tears when he was able to contact his dad on a phone provided by the CNN news crew.

5. Men save trapped twin kittens while out boating

These guys were out for a boat ride when they noticed something unusual swimming towards them. Two twin kittens that were trapped on a nearby island made their way to the boat. The amazing moment was caught on video.

While out on his deck, Ken Heinrich noticed orcas breaching in the distance.

So he grabbed his camera and began filming the action from the shore, before going in for a closer look on his kayak.

“I spotted breaching orcas from the deck so we took photos and vids for a couple of minutes before jumping in the kayaks,” he wrote on Youtube.

“We were simply drifting when the pod came towards us and at one point circled around to the shore side of us. The most amazing animal experience of my life!!!”

Mexican bakers in Texas were trapped inside for two days, so they made pan dulce for hundreds of Harvey victims https://t.co/XfvSCiEHqM

These bakers at a Mexican bakery in Texas were trapped indoors because of rising floodwaters. So, they decided to make use of their time by baking Mexican bread and other treats for hurricane victims. By the time the men were rescued, they had used 4,000 pounds of flour. The bakers spent the next few days distributing the bread to those in need.

8. Video of Montreal cops is getting attention for all the right reasons

A video of Montreal cops is gaining attention for all the right reasons.Two SPVM officers were in Jean-Brillant Park and were passing by a group of fitness enthusiasts working out on equipment.

The officers got challenged to compete in a dips and chin-ups contest and they took on the challenge. Officer Erick Denino dipped like it was no big deal and officer Valérie Guérin-Thériault was a chin-up champ.

This dog was drowning in Hurrican Harvey’s flood waters but these people risked their lives to save him.

A young man jumped into the water and manage to bring the pup to safety.