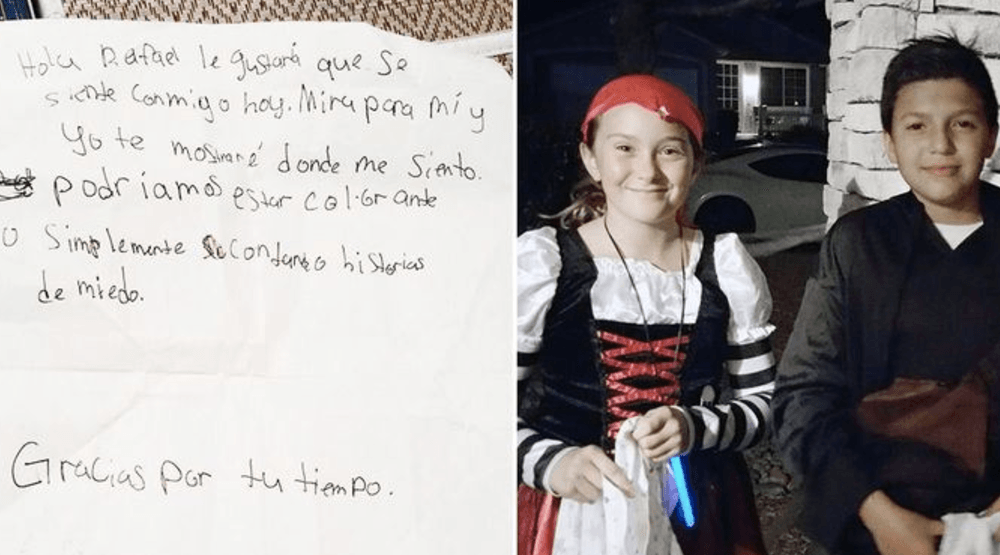 1. This pile of sleeping puppies will make life better

Ok, so this week has been a little stressful with all that drama going on down south. So let’s just all take a minute to forget about the election gong show and watch some very cute, sleeping puppies instead.

Hunter Jobbins left his car unlocked and unattended for a few minutes on October 30 and someone broke in. The thief ended up taking a Kit Kat bar that was sitting in his cup holder and left behind a note that read:

“Saw Kit Kat in your cup holder. I love Kit Kats so I checked your door and it was unlocked. Did not take anything other than the Kit Kat. I am sorry and hungry.”

Jobbins took to Twitter to share his disbelief about the Kit Kat thief and the chocolate company noticed. Kit Kat ended up sending Dobbins hundreds of boxes of the chocolate, so even if the thief strikes again, he will be prepared.

3. Dog who can’t walk teaches baby how to crawl

Artie the Dachshund and 15-month-old Ben are best friends. Artie is partially paralyzed and has trouble using his back legs and Ben is a baby and he only crawls, but this has created a strong bond between the two. Because the dog is used to getting around with his two front legs, he managed to teach Ben how to crawl and it is the most adorable thing ever.

In other news: Despite ‘one-in-a-million’ odds, Jeremy the lonely snail has found a lover https://t.co/3I0OKC7uR3 pic.twitter.com/MFVLLhXzXS

Jeremy is a British garden snail suffering from a very rare left-spiralling shell, ruling out almost all chances of him being able to mate with another snail. But luckily, Jeremy has found a potential mate named “Lefty.” Scientists thought that Jeremy would never be able to find a girlfriend but he has defied the odds, making for a true love story.

5. Golden Retriever gets styled at the salon

This Golden Retriever showed up at the salon to get a blowout, and it’s pretty much the cutest thing ever. Go on, get your diva on.

Merel, an 18-month-old Black Labrador mixed with Bernese Mountain dog is helping kids and teens in London, Ontario, calm their nerves before testifying at the London Courthouse. Merel is the first dog in Ontario to provide this kind of service for kids at the courthouse and she is doing a great job being a comfort to kids before they have to testify.

The largest forest grove of giant redwood trees outside of California will be planted in Burr Castle Gardens, Ireland. Giants Grove will be designed to sustain decreasing numbers of the trees and help with their long-term growth over the next 1,000 years.

8. Toys R Us begins ‘Quiet Hour’ in stores to accommodate kids with autism

UK branches of Toys R Us are implementing a ‘quiet hour’ in stores so kids and adults on the autism spectrum can peacefully browse the store. “Autistic children and adults can become overwhelmed with too much information inside a busy store,” Daniel Cadey of the National Autistic Society told the Good News Network. “Simple changes like this can make a huge difference. We hope that many more major retailers will follow the great example set by Toys R Us.”

10 y-o Amanda Moore wrote an adorable letter to her classmate Rafael with the help of Google Translate. #9Today https://t.co/cEz4teL7Az

A girl from California has found a way to make a new friend using Google Translate. Ten-year-old Amanda Moore used Google Translate to write a letter in Spanish to her new classmate Rafael who can’t speak English. Moore noticed that Rafael was having trouble making friends because of the language barrier so she decided to take matters into her own hands and find a way to communicate with him. “Look for me and I will show you where I sit,” wrote Amanda in the letter. “We can colour or simply tell scary stories.” Now that is the kindness and compassion we need to see in the world right now.