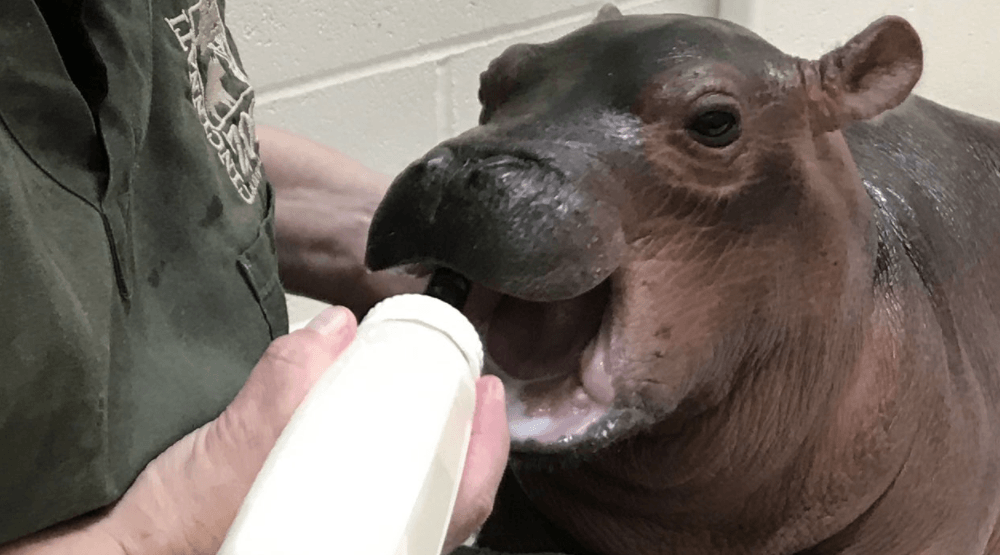 Fiona took 2 bottles this morning & seems to have more energy. She’s receiving fluids via IV but is able to get up & move around. #TeamFiona pic.twitter.com/g3BJ31w2AO

Born six weeks early, Fiona the baby hippo fell ill after refusing to drink milk. Staff at the Cincinnati Zoo had been trying to get Fiona to drink milk but she was teething, making it difficult for her to take a bottle.

The Cincinnati Children’s Hospital Medical Centre has stepped in to help Fiona, using medical IVs. “Preemies have very tiny and unstable veins, and even though our vet team was able to get multiple IVs placed, the veins could not sustain the IV and would blow,” the zoo’s curator of mammals Christina Gorsuch, told BBC.

The hospital sent their vascular team to the zoo in order to rehabilitate the Fiona and her condition is improving.

2. Fifth grader asks police for help with math homework and they respond

When fifth grader Lena Draper was having some trouble with homework, she turned her local police to help her out.

Lena got on her mom’s Facebook account and decided to message the Marion, Ohio police department’s Facebook page. “I’m having trouble with my homework, could you help me?” she wrote. BJ Gruber, the officer who runs the page, decided to respond and asked her what she needed help with. Lena replied with, “Well I don’t understand (8+29)x15.”

Gruber helped her figure out the entire equation and Lena got her homework done.

An African farmer has been making sure wild animals in drought- stricken Kenya don’t go thirsty. Patrick Kilonzo Mwala is a pea farmer who has been filling a local watering hole that is frequented by elephants, lions, and buffalos. He makes the 45-kilometre trip about four times a week to make sure the animals are well hydrated.

Atlantic Canada has seen a fair share of snow this past month.

Just over a week ago, the region was hit with a blizzard that left nearly 80 cms of snow.

And in New Brunswick, where a lot of that snow landed, a resident decided to have some fun with it.

In a Facebook post, Denis Jalbert shared an epic snow maze he built for his corgi, Wally. Jalbert wrote that it took 6-7 hours to complete, and they had about 24 hours of good weather before it began to melt.

And lucky for everyone, Jalbert shared this cute video of Wally enjoying the maze.

5. Puppy found alive after being trapped in well for 10 days

This puppy fell into a deep well for 10 days in Turkey. Locals heard the pup crying and called emergency crews to rescue him. The puppy fell almost 200 feet underground. Rescue crews were able to pull the dog out, and he was adopted by the local fire department.

6. Walmart cashier pays off half of grocery bill for family of five

Ashley Jordan of South Carolina was taken by surprise when a Walmart cashier paid for half of her $200 grocery bill. The mother of three was shopping with her husband last week. When it came time to pay the cashier, Sharnique Dasant told the couple that they needed a “blessing.”

“She said ‘I think y’all need a blessing tonight!’ And she walked around to the machine and swiped the card,” Jordan told People. She took a picture with Dasant and posted the story on Facebook where it has gone viral.

“I wanted her friends and family to know how genuine she is, because we need to see these good stories in the world today, and it’s good to know there’s people out there who will do a blessing like this,” said Jordan.

7. Puppy born with selfie on ear

Can you spot the selfie on this puppy’s ear? Lucy was born with an ear that looks a lot like her. The pup was a shelter dog, but when the picture of her special ear went viral, a loving family decided to adopt her.

Jasiri is a five-year-old giraffe that lives at Reid Park Zoo in Arizona. He was recently spotted practicing his soccer skills, and he has got some moves!

Sure, they could’ve taken a snowblower and shovels to simply clear all the snow from their property after back-to-back snowstorms recently – but where’s the fun in that?

Instead, some Halifax residents decided to make the best of the winter weather by building a giant snowman.

It reportedly took 12 hours for the trio to make the giant snowman, which they affectionately named, “Chubby.”

Now, the winter creation wonder has attracted not only the attention of neighbours, but attention online as well.