1. Man who walks 21 miles to work everyday gets a helping hand from online donations 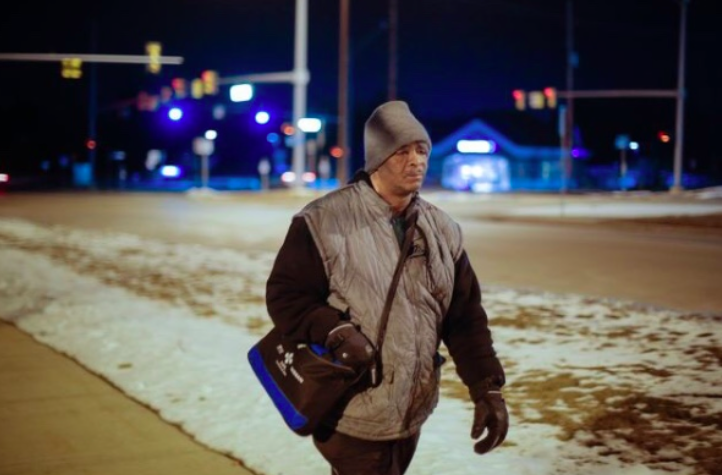 James Robertson works as an injection molder at a plastic manufacturer in Rochester Hills, Michigan. Robertson lives in Detroit and for the past 10 years the 56-year-old has made the 21-mile journey (almost 34 km) from his home to work by foot or limited transportation. He once owned a car, but it broke down, and with his $10.55 an hour pay, he cannot afford to buy a new one.

The Detroit Free Press published his story, and people took notice. One of those people was a college student in Detroit named Evan Leedy who wanted to help by setting up a GoFundMe campaign in order raise money so Robertson could buy a car. Leedy was not sure that people would donate, but to date he has collected over $250,000 for Robertson to get the transportation needed in order to make his 21-mile journey a little bit easier. Read More

2. Widower gets to hear his late wife’s voice again

Stan Beaton lost his wife Ruby to stomach cancer 13 years ago. After her death, 68-year-old Stan had one remaining memory of Ruby, in the form of an old voicemail recording. He kept the voice message on his answering machine so he could still hear her voice. Due to a switch in phone companies, Ruby’s voice message got deleted and Stan was heartbroken. However, the phone company was able to recover the old voice recording, and Stan’s heartwarming reaction to the good news was captured on camera.

3. Woman leaves her husband a love note to find after she passed away 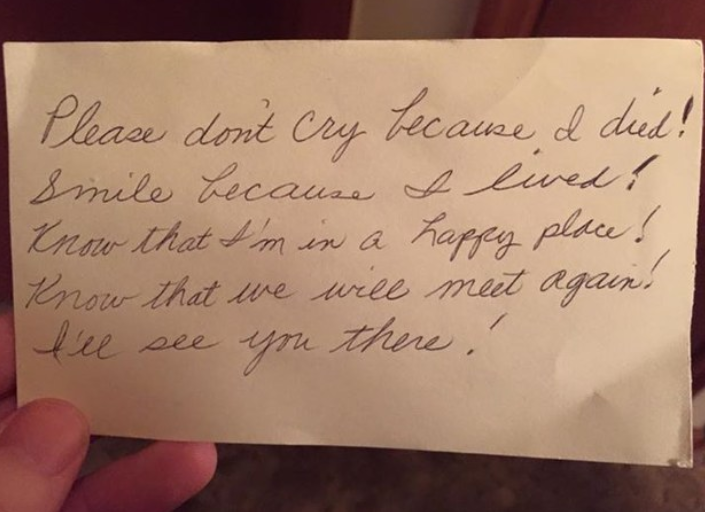 Jimmy and Billie Breland married in 1954 and the couple spent 60 happy years together. Sadly, Billie’s health began to decline and she passed away at age 83 this past January. Billie was known to leave notes around the house and after her passing, a note she had written for Jimmy was found tucked away in her check book. It reads:

“Please don’t cry because I died! Smile because I lived! Know that I’m in a happy place! Know that we will meet again! I’ll see you there!” The couple’s grandson, Cliff Sims, explains a picture he posted of the note has quickly spread online, serving as a reminder that, “ love conquers everything, even death.” 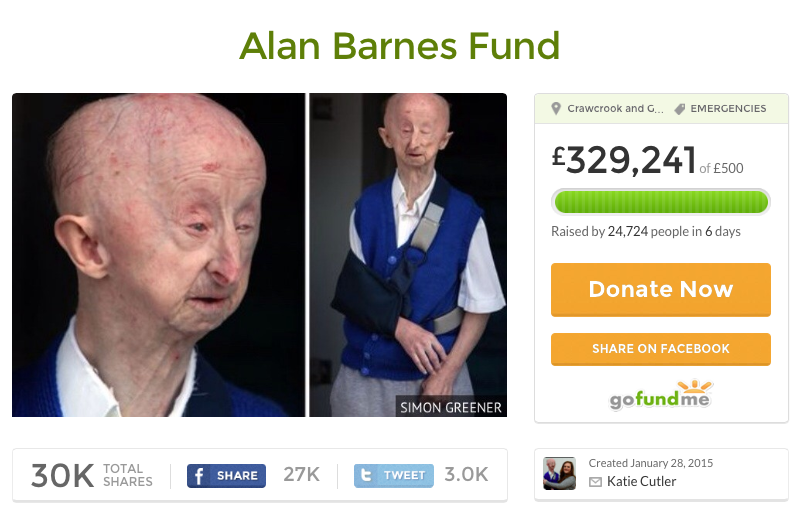 Alan Barnes of Gateshead, England was physically attacked and robbed outside his home on January 25. The 67-year-old is also disabled and the assault left him with a broken collarbone. After hearing about what happened to Barnes, a beautician named Katie Cutler decided to set up a GoFundMe campaign in order to help Barnes with medical costs. Over 20,000 people have donated to the campaign and $500,000 has been collected for Barnes. Donations have poured in from all over the world leaving Barnes amazed. “I’ve heard of fundraising for charities but I’ve only got a fractured collarbone, I didn’t expect that sort of response,” he said. “Thank you doesn’t really seem to answer it, does it?”

5. Terminally ill boy gives his best friend a trip of a lifetime 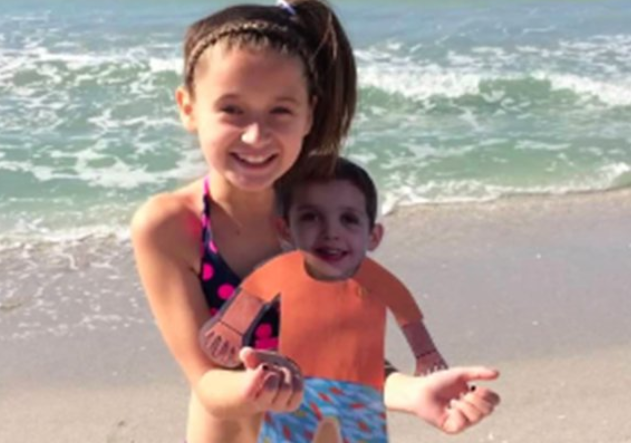 Six-year-old Levi Meyhew of Indiana suffers from a rare genetic disorder, which has left him with two years to live. He was recently given a trip to Florida by the Make-a-Wish-Foundation but doctors told him that he was too sick to travel. Levi decided to pass on the trip to his best friend Emma and her family. The two children attend the same school and Emma has always been there for Levi through the ups and downs of his illness. Even though Levi could not travel, Emma still wanted to make sure her friend was there in spirit, so she took a printout of him with her to Florida.

6. Croatian government writes off the debts of 60,000 citizens living in poverty 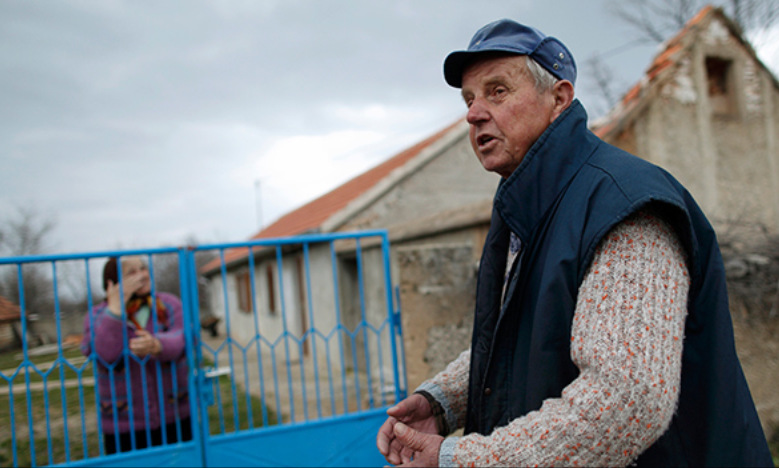 Some of Croatia’s poorest citizens were given a chance for a fresh start, when the country’s government decided to dismiss their debts. Approximately 60,000 Croatians will be eligible for government assistance. Although the government’s decision to erase the debts will only impact one per cent of the nation’s population, it is expected to be a positive step to boost Croatia’s economy.
Read More

7. Man reunited with his missing dog while looking for a new pet 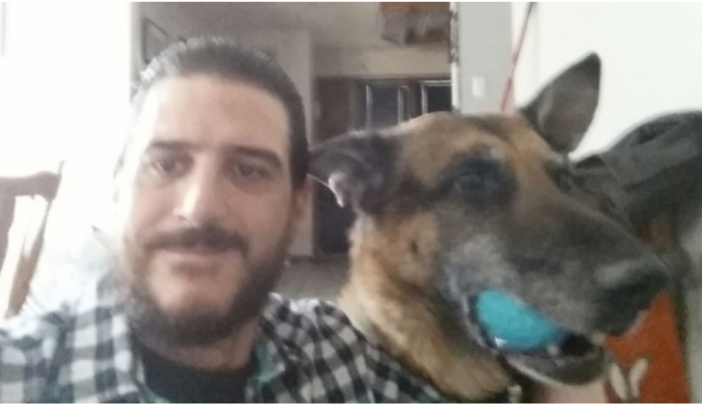 Richard Brower of Calgary had a tough time coping after his German shepherd, Dozer, was stolen from his yard more than a year ago. After months of searching for Dozer, Brower lost hope and decided that it was time to move on and get a new dog. He did a search on the Claresholm Rescue Society‘s website for dogs up for adoption, only to find Dozer as come up as the first search result. Brower was reunited with Dozer the very same day. Read more

8. Toddler calls 911 to save her pregnant mother and becomes a big sister

Manning of Michigan did just that. Her pregnant mother, Centerria Manning, had a seizure and fell to the floor but Calise did not panic. She calmly called 911 and medics took her mother to the hospital where she gave birth to a baby boy. Centerria made sure to regularly practice what to do with Calise in case she was ever having a seizure. The practice paid off and the family is healthy and celebrating the arrival of Calise’s new baby brother.

9. B.C. woman gives birth to twins by herself in pickup truck while husband drives her to hospital 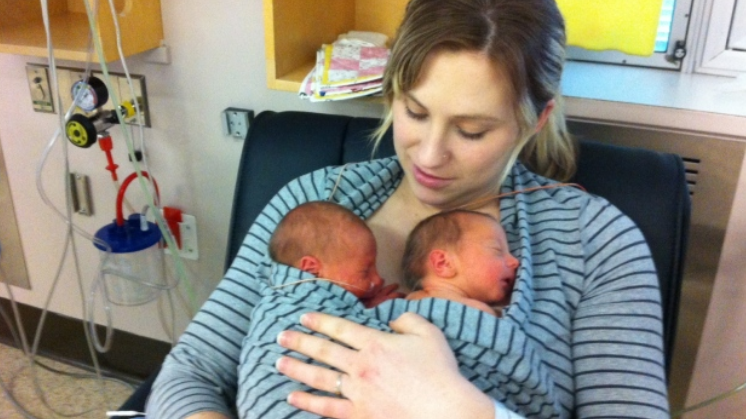 Nika Guilbault and her husband Chris St. Jean were in for a wild ride as the couple rushed to get to a hospital in Kamloops as Nika was going in to labour. However, things did not work out as quite as planned because Nika’s twins were a little too eager to get out into the world. As Chris sped down the highway, Nika gave birth in the pickup truck. Her daughter Nevada was delivered first and her son Hunter arrived in the parking lot of the hospital, where doctors assisted with his birth. Both babies are healthy and have earned the nickname the “Dodge twins” in homage to the pick up truck in which they were born. Read More