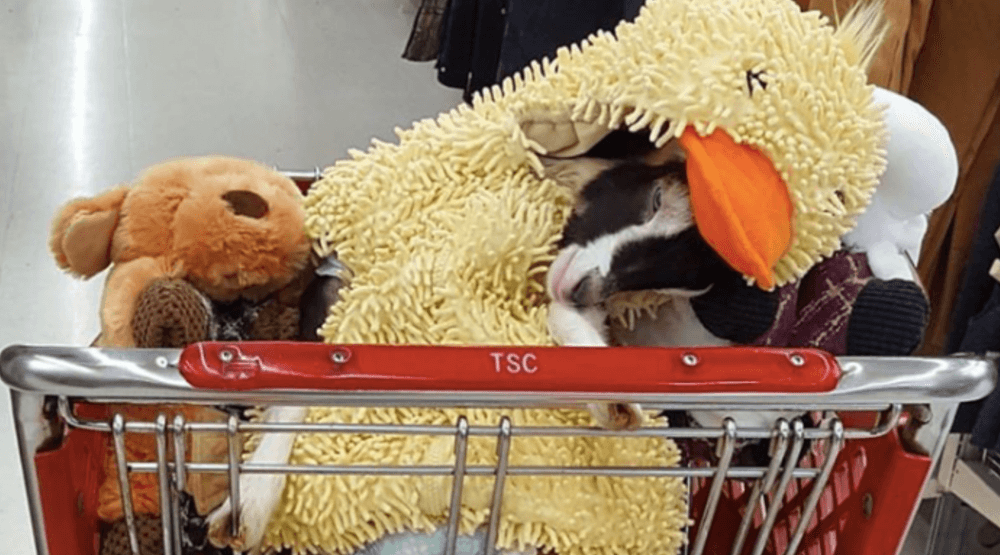 1. Anxious rescue goat calms down when she wears her duck costume

Polly the baby goat lives at the New Jersey animal rescue Goats of Anarchy. Polly suffers from anxiety so to help her cope, she wears a duck costume. The outfit helps Polly calm her nerves and she looks adorable wearing it.

Sydney FC’s goalkeeper Danny Vukovic is a great goalkeeper but last Wednesday he made a game stopping move–literally. During the game, the soccer ball accidentally hit a seagull. The bird ended up landing on the pitch and Vukovic stopped the game to make sure the seagull was ok.

3.Puppy is amazed when he sees mom going down the stairs

This puppy was amazed seeing his mom go down the stairs, and we promise it is one of the cutest things you’ll see today.

Canadians know that residents of Fort McMurray, Alberta, have had a rough year. And they couldn’t have handled these tough times any better. WestJet decided to do something special for those in Fort McMurray by putting on a ‘Snowflake Soiree’ for those impacted by the fires. This was not any ordinary party. West Jet dropped hundreds of tiny parachutes from the sky for residents that contained a free roundtrip ticket to any of the 150 locations that WestJet flies.

5. Boy makes hundreds of stuffed animals for sick kids around the world

Campbell “Bumble” Remess is no ordinary boy. When he gets home from school, he starts sewing for a good cause. That is because he makes stuffed animals for sick kids all over the world. Over the past three years, Remess has made over 800 plush animals and he has also delivered them to kids at his local hospital

A huge 23-pound giant lobster caught off the coast of New Brunswick has been set free by one Canadian. The lobster, nicknamed “King Louie”, was waiting to be a meal at the Alma Lobster shop. But vegan Katie Conklin from Nova Scotia decided to spend $230 to buy King Louie and set him free into the ocean.

A couple from the US who have been married for 70 years are celebrating their anniversary with an adorable photo shoot. Ferris and Margaret Romaire of Louisiana were treated to the photoshoot by their granddaughter Amanda Kleckley. Mr. Romaire wears a tuxedo and Mrs. Romeire is in an off-white gown as they pose for the heartwarming pictures.

Lois Olsen is probably the richest great-grandmother in Canada. The 80-year-old from Irma, Alberta won $50 million in the lottery last week. Olsen says she is too old to spend the funds on herself.

9. Dog that loves Santa gets to meet real Santa and freaks out

My dogs favorite toy is Santa, so we brought her to see him pic.twitter.com/vPl6YMyOIz

Kya the dog is obsessed with her plush Santa toy but when she got to meet the real Santa she freaked out. Kya’s owners took her to meet Santa at their local mall in Orlando, Florida, and the dog was beyond excited making for a great photo opp.