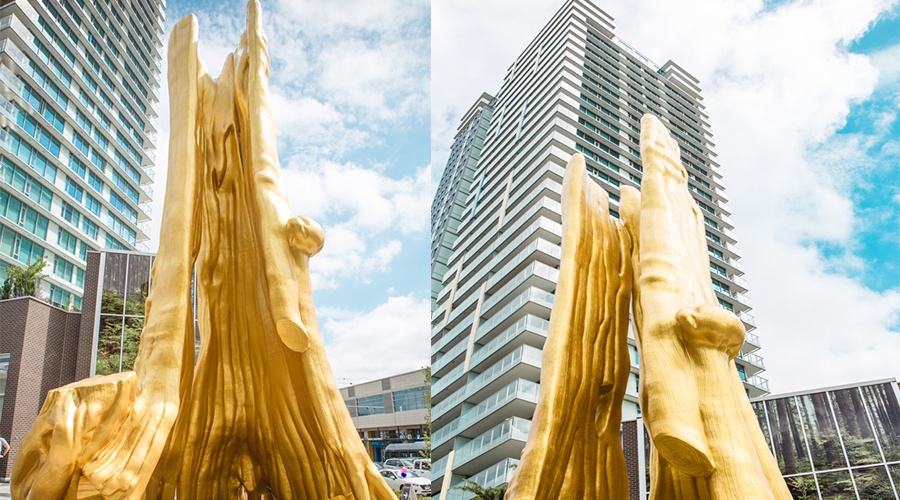 If you’ve been to South Vancouver recently, you may have noticed a rather peculiar looking golden tree has infiltrated the area.

The Golden Tree is, in fact, an exact replica of the Hollow Tree in Stanley Park. Vancouver born artist Douglas Coupland was tasked by Intracorp and the City of Vancouver with bringing the vision to life. The piece, which was unveiled by the City on Saturday, is meant to represent Vancouver’s unique connection between urban life and nature.

For reference, here’s the real Hollow Tree in Stanley Park:

Stanley Park’s Hollow Tree is 700 to 800 years old, according to the City, and was slated for removal after it was damaged by the windstorm in December of 2006. A conservation society was formed, and the piece of Stanley Park history was preserved through stabilization.

The golden rendition of Stanley Park’s famous tree can be found at Cambie and Southwest Marine Drive, an area that Coupland felt was “spooky” growing up. The tree is located near a Canada Line station, so commuters will be able to look at it on a daily basis.

You might recognize some of Coupland’s other work around town; he was the visionary behind the Digital Orca at Jack Poole Plaza and the Terry Fox Memorial at BC Place.