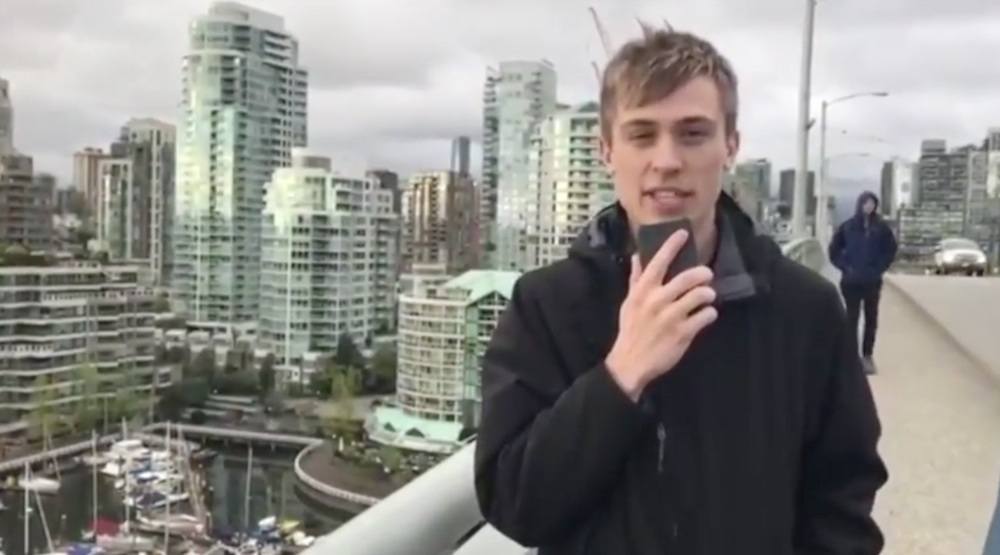 Jacob talks about his friend, a gay Iranian refugee who took his life on the Granville Street Bridge. (YouTube screenshot)

A GoFundMe page set up in honour of a 22-year-old gay Iranian refugee living in Vancouver who committed suicide has received an outpour of donations from friends and strangers.

The fundraising page was set up by the man’s friends, Jacob Arnold and Pedram Niakan, and aimed to raise $6,000 to pay for funeral costs in Iran.

“Our mission is to send his body back home to Iran, so that he may rest in peace according to his family’s faith and traditions,” wrote Arnold on the GoFundMe page.

“However, it is very costly to send his body to his family. I (Jacob), and my friends decided to help his family with the cost of transferring his body home.”

In less than a week, the page has collected over $6,000 in donations.

“We are so surprised. It’s bittersweet,” Niakan told Daily Hive.

The man’s friends are now working with the Ministry of Social Development and Az-Zahraa Mosque in Vancouver to make the proper arrangements to send his body back home.

Niakan says that his friend arrived in Vancouver a year ago and was struggling with his mental health.

In early May, he was admitted to a local hospital to help treat his depression and anxiety.

“We were in touch with Burnaby Hospital and after three days we didn’t hear any news,” said Niakan. “So we followed up with the police.” That’s when Niakan learned his friend had committed suicide.

“We lost him. Everyone felt guilty that we weren’t there for him.”

For Niakan, the support from friends and strangers donating to the GoFundMe campaign has been overwhelming.

The local Persian community has also flooded the page with donations to make sure the man can have a proper funeral service in Iran.

“Everyone (in the community) was sad. My old boss, she was Persian, she told me, ‘I am a mother. I feel bad this happened in my city,” said Niakan.

People across Canada and in the US have also been flooding in.

“This is humanity,” said Niakan. “Friends in New York made a group as well. Friends in Toronto did so as well. And all of this happened in three days.”

Niakan says that his friend struggled to find support as a gay refugee and a number of factors left him feeling lost and alone.

“He would often say, ‘I think I am suffering because being gay is bad. My family expected me to be a better person,'” Niakan explained.

Ultimately, the feeling of isolation and despair led him to take his own life.

Niakan says that the man’s family in Iran did not know he was gay. It was only after his death that they found out.

But now, his family just wants him to return back home so they can pay their respects.