If you thought the winter of 2014 to 2015 was warm and dry, think again. Scientists are predicting this coming season to bring the strongest El Nino since 1997.

Dubbed the ‘Godzilla El Niño’ by NASA scientist Bill Patzert, this year’s weather pattern will bring wet weather to normally dry regions and dry weather to normally wet regions. Though this bodes well for drought-stricken California, those on Canada’s west coast may continue to struggle with a low snowpack, little rain and unseasonably warm temperatures.

It might sound great to the average Vancouverite, but the weather pattern will have damaging effects on various industries in the province.

The U.S.  National Oceanic and Atmospheric Administration predicts a 90 per cent chance that the El Niño we are currently experiencing will continue in the Northern Hemisphere into spring 2016, peaking in late fall and early winter.

“This definitely has the potential of being the Godzilla El Niño,” said Patzert, a climatologist with NASA’s Jet Propulsion Laboratory. He also claims that signals from the Pacific Ocean indicate this El Niño is stronger than the 1997 one, the most powerful El Niño on record.

“This potentially could be the El Niño of our generation,” he told the Los Angeles Times.

UBC Climate Scientist Simon Donner understands exactly how the El Niño pattern forms, and warned last summer about a possible warm and dry winter. As it turns out, his predictions were accurate.

“El Niño itself begins far away in the equatorial Pacific. A reversal of winds and currents brings unusually warm waters to an area between the coast of South America and the International Date Line. This is like dropping a huge rock in a stream. The warm waters release so much energy into the atmosphere that the normal flow of air is diverted, affecting weather all over the planet,” he said. 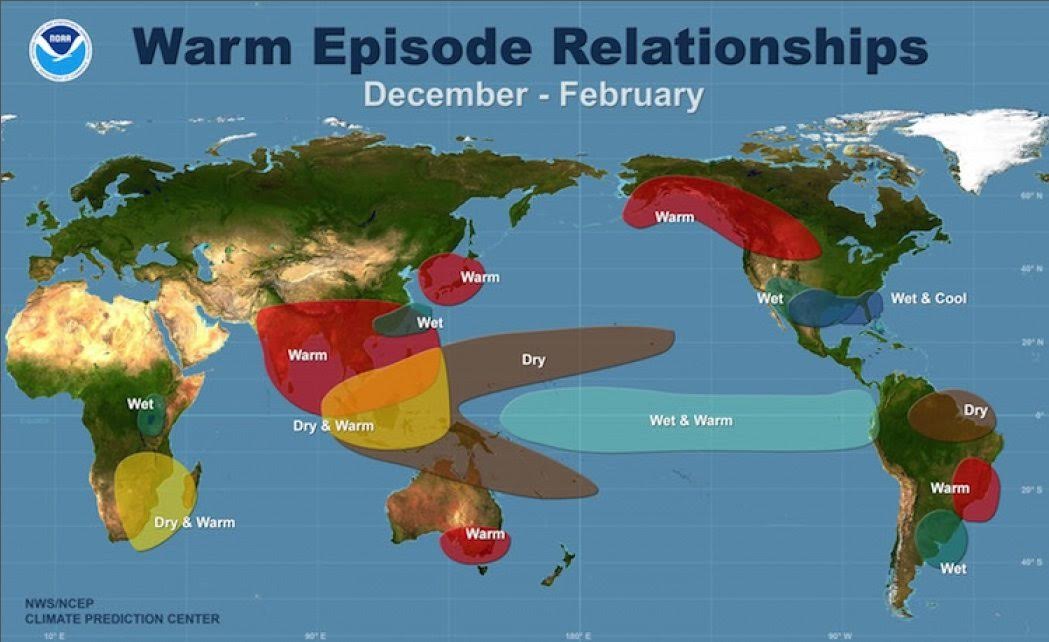 The effect leaves those in Western and Central Canada with a warm and dry winter and spring while those in the southern U.S. will experience extremely wet weather.

AccuWeather released their fall projections for Canada Wednesday and they too call for a continuation of the ongoing drought in southern B.C. Quebec and the Maritimes are expected to receive cooler than average temperatures from south-bound Arctic fronts and Ontario and Manitoba should see rather seasonable weather.

Southern Ontario will be drier than normal into the fall.

For the local ski hills, after a damaging winter ski season last year, another forecast of warm and dry weather is definitely not something they like to see.  But Ainslie Fincham, spokesperson for Grouse Mountain, says they are staying positive. While the resort hopes for the best, crews are already at work prepping in case the weather does not act in their favour.

“History has proven that Mother Nature is unpredictable, to prepare we have significantly augmented our snowmaking that will enable us to provide top to bottom mountain coverage and we have been hard at work on summer grooming that will facilitate skiing on significantly less snow,” Fincham told Vancity Buzz.

Like all weather forecasts, we will all just have to wait and see.