Last week I was invited by the Ford Motor Corporation to not only take one of their newest models for a week long test drive, but also to attend the Further With Ford Trend Conference in Detroit. Now what does a massive multinational conglomerate based in the U.S. Rust Belt have to do with our fair city? Well actually, it’s a hell of a lot more than you think. During my time with the Blue Oval’s 2013 Focus Titanium, and at their massive Dearborn, Michigan facility, I learned how the company that popularized the automobile is also a world leader in sustainable manufacturing and business practices.

First, the Ford Focus Titanium. As a car it’s not particularly exciting. Slow to accelerate, the fuel sipping focus is a fine commuter, but it’s not going to give seasoned drivers the thrill of being pushed back into their seat or make them feel like Ayrton Senna, racing around an F1 track, even with the 6 speed dual clutch transmission. However, that being said, if you are going to be stuck in traffic on your commute back to the ‘burbs you could do worse than the Focus. A lot worse. 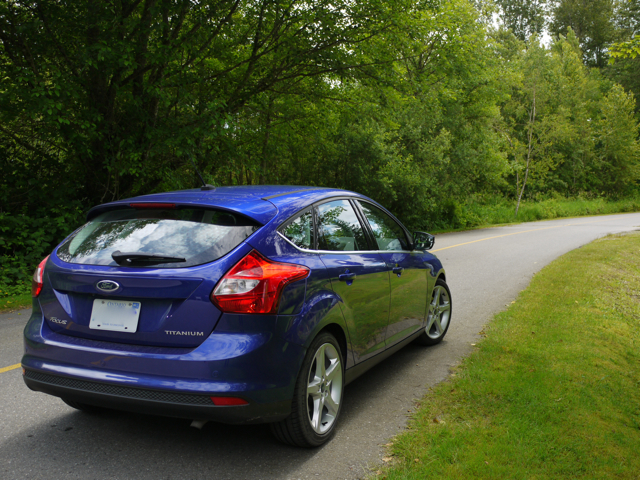 Simply put, the Focus Titanium is an entry level Gadgetmobile. The centre console, dominated by a Microsoft based SYNC system, is literally a PC in your car. The voice activated touch screen navigation system works quite well… (after you learn how to talk to it) and gives you the choice of the fastest route, the shortest route, or my favorite, the Eco route. And while you’re taking the long slow fuel efficient way back to Delta or Surrey or even the epic slog across the Burrard Street Bridge, the Sync system provides ample opportunities to listen to satellite radio, play a cd, (who even uses those anymore?!) check out points of interest and look up those traffic disruptions leaving you stuck behind the wheel for an average of 2.5 hours a day. 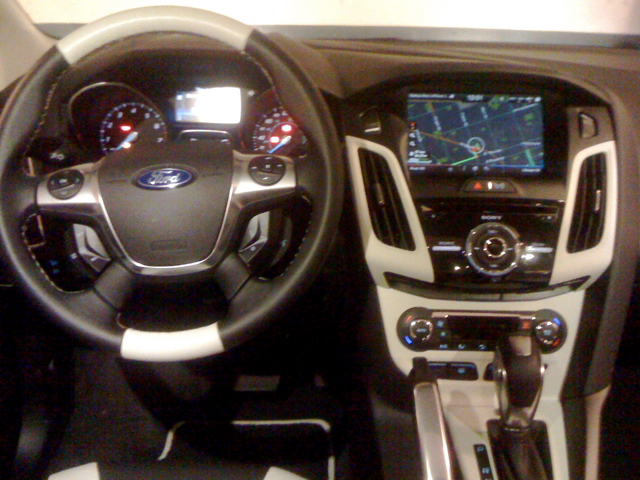 In addition to all the Bluetoothy bells and whistles you’d come to expect from a more expensive car, the fully loaded Focus bristles with sensors and detectors designed to keep drivers and pedestrians safe. At first, it’s a little disconcerting to hear the Focus beep at you when someone’s too close to the front of the car. The collision warning system surrounds the Focus with an invisible shield letting you know if there are any obstructions, or just how close you are to ruining the rims by scraping them against a particularly high curb. And this is where the Focus shines. For example, we all know people hate parallel parking, right? It’s hard, stressful and most humans are so bad at gauging the size of a potential parking space they end up not only beating the crap out of their bumpers, but also blocking traffic and enraging everyone in the half mile lineup behind their awkwardly positioned conveyance. Well, now, with Ford’s wonderful Park Assist, you simply hit a button, and the car itself selects an appropriately sized spot, tells the driver to pull forward, put the car into reverse, and let go of the wheel. By using a driver controlled combo of gas and brake, the wheels turn themselves and position the vehicle in such a way that it slips right into the spot. No fuss, no muss. And don’t worry about bumping anything while backing up, the rear facing camera puts a realtime feed right up on the screen, complete with augmented reality graphics, which show the turning radius and change colour from green to red based on how close the car gets to an obstacle, complete with a slow beep that increases in frequency the closer you get to ruining someone’s Bentley. 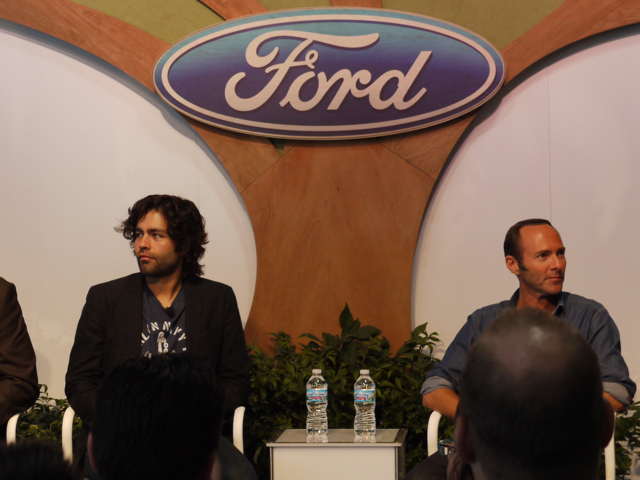 Now, about what Ford is doing way the hell out in Motor City, and what it has to do with living in Lotus Land. When you’re the company responsible for popularizing the automobile, you get to carry lots of different weights on your shoulders. Sure you’ve granted the masses with affordable, almost unlimited mobility, but you’re in part responsible for the destruction of the environment, ruining local manufacturing and employment bases and have a reputation of putting profits before people. Now if you’re a person like Executive Chairman of Fo-Mo-Co, Bill Ford, you start to see the legacy left behind by those more interested in padding their pocketbooks than making the world a better place. So what has Bill Ford done? Well he used his family name and power to completely revamp the Ford Motor Corporation’s approach to building cars. Starting with a look at the entire system, and by that I mean a global outlook, Ford has committed to becoming the world’s most sustainable auto manufacturer. Hell, the word manufacturer is a misnomer. Let’s call Ford an “Automotive Developer”. Anyways, Ford’s commitment to changing the way things are done in Detroit has resulted in producing vehicles that are safer, more recyclable, more fuel efficient and of a quality higher than before, but at a price aimed at the average consumer. Not only is Ford now making better cars, but the process of building them has resulted in the installation of the world’s largest green roof at their factory, a leaner, more efficient vehicle development process and the most comprehensive line of multifuel and hybrid cars and trucks on the market. 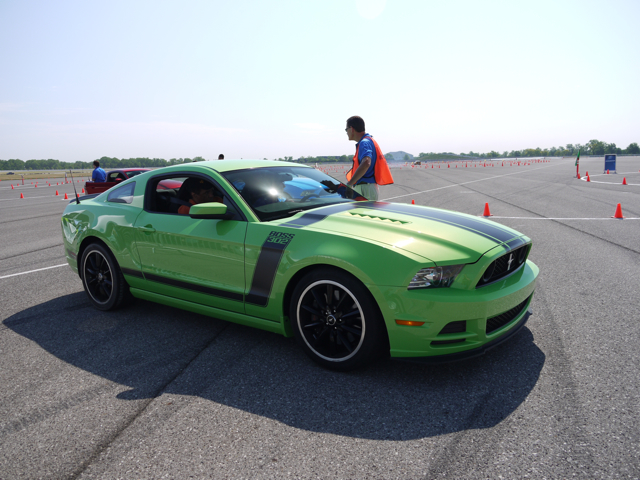 Even though Ford is all about making sustainable cars, they still emphasize performance

So how does this apply to Vancouver? Well it’s pretty simple. The so called Greenest City is attempting to implement policies which hopefully would make Vancouver a better place to live. And while installing smart meters and pumping out recycling programs and feelgood events by the sackfull may look good on twitter and the social web, Vancouver’s policymakers have forgotten about the key ingredient to making the world a better place. That ingredient, that crucial factor is people. While Ford Motor Corporation has understood their most valuable resource and key to success in the future, is in fact people, the City of Vancouver, has taken the opposite approach and treats humans like a bothersome detail on the way to creating a rarefied green playground available for use only to a select group of very wealthy individuals and real estate developers living in a tiny geographic area. The jokers at City Hall forget all too quickly about the rest of the Lower Mainland when they massage their facts and figures in in-camera meetings. So while things may look good on paper, the reality is far less clear. 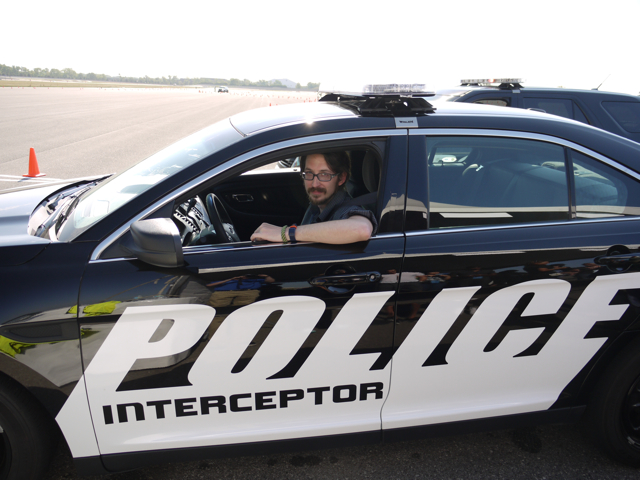 My audition for the upcoming film, "Bad Cop: No Donut"

So, to conclude, I’d like to invite the Greenest City to take a look Ford’s new approach to producing cars, and jump on an opportunity to rethink the way they do things here in Vancity. Perhaps this somewhat counter-intuitive comparison will help our town, “Go Further” and allow everyone the chance to be free and prosperous, before we end up with a deserted urban wasteland like Motor City in the 70’s and 80’s