Much was left to be desired from Thursday’s Globe and Mail leaders’ debate on the economy. Though Liberal leader Justin Trudeau had the most to gain from this debate, it was ultimately Prime Minister Stephen Harper’s game to lose. And he did lose.

Harper used the same technique he employed in last month’s Maclean’s debate. He reiterated to the public what the Conservatives have accomplished (what they’ve done) instead of what they plan on doing.

He chimed in when he was addressed but definitely didn’t put his gloves on for a fight.
Last month, he left Mulcair and Trudeau to concentrate the fire on one another, which they did. He had hoped for the same scenario during this debate, but as we clearly saw, that was not the case.

The absence of Elizabeth May was surprising. Not only did she deserve to be there, she needed to be there.

As I had described the last debate, the same could be said here – the boys were fighting and a mature girl was needed to subside the animosity.

In addition, May has an uncanny ability to target, at a whim, any question or rebuttal directly at Harper. By May not being around, perhaps Harper thought it would be an easier fight, but the ‘lion’ stood in his way.

Don’t get me wrong, Trudeau got his jabs on Harper too, but it was Mulcair who set the tone from the onset of the debate.

Any open opportunity Mulcair had where he could target Harper, he took.

He did not let his emotions get out of control, but with that being said, he definitely did not back down from the open debates.

May’s absence benefited Mulcair the most. As a result of her absence, attack points against Harper were a plenty and Mulcair capitalized.

You would think Trudeau would have learned from the first debate that he should concentrate on defeating Harper instead of bickering with Mulcair, but he did not.

I watched the debate in hopes that Trudeau would shine, I honestly did. But again, he felt the need to fight against a fellow leftist party leader.

Firstly, his near-robotic mode of speaking early on in the debate, addressing the camera with almost theatrical emotion, and allowing the moderator David Walmsley to force him back on point when he should have kept himself on point, were reasons more than enough for me to dismiss Trudeau.

He lost the debate in the first five minutes, then tried to redeem himself for the rest of the forum.

Secondly, Trudeau continues to be baited out of character much too easily. His ego bruises quickly for someone whose goal is to be the Prime Minister of Canada.

Positions at the top of mountains will always be places where others cast stones. You cannot let the stones be bold enough to strike you down.

Though Trudeau did enough in the debate to not be considered the loser, he did not do enough to be marked as the winner.

Mulcair clearly kept his agenda on the forefront, he did not get overly emotional nor did he get baited by Trudeau.

His enemy was Harper, his goal was prime-ministership, and he won some votes. 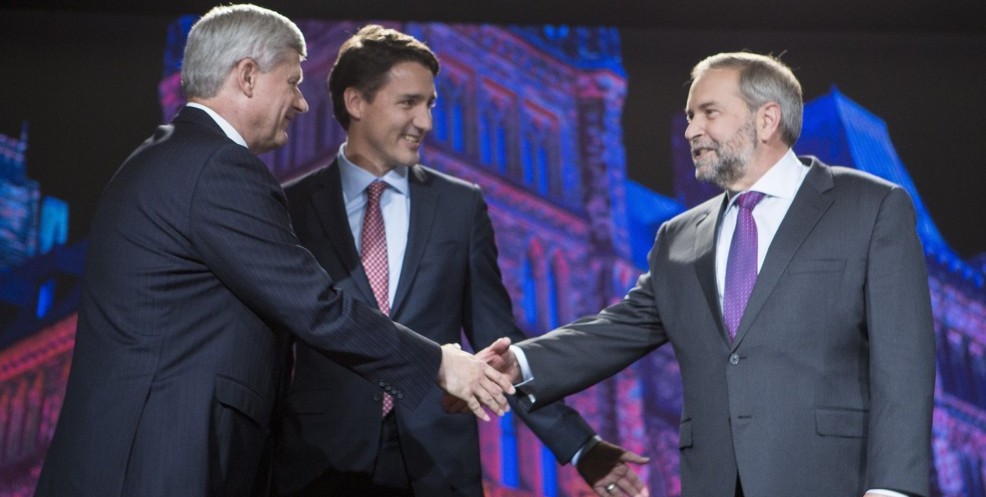 The debate was a bust, though, and many viewers felt the same. It was a debate with too much refereeing, the moderator was condescending at best, and nothing new was presented.

When the gauntlet was thrown down by one of the party leaders, Walmsley would interject quickly and move onto another question.

The debate’s structure was not a success and for future debates, presented by The Globe and Mail or others, the structure should allow reasonable time for discourse, because ultimately, that is what a debate is.

A friend of mine said it best: “As long as Harper and his regime can keep the left splintered, the right will continue to win.”

To them a minority or majority government is the same, as long as the head of the snake remains intact.

The views and opinions expressed in this article are those of the author and do not represent the views of Vancity Buzz.