Sea levels across the planet have risen by an average of eight centimetres over the last 13 years, according to NASA scientists on Wednesday.

The observation and analysis were made using 23 years of satellite data, the entire record of available satellite data, and provides scientists with new possible models of how fast sea levels could rise over the decades and century to come.

A previous assessment by the United Nations in 2013 predicted global sea levels will likely rise between one to three feet by the end of the century. NASA’s new data indicates the high end of the U.N.’s range is more likely, with the possibility that the range could even shift upward.

“Given what we know now about how the ocean expands as it warms and how ice sheets and glaciers are adding water to the seas, it’s pretty certain we are locked into at least three feet of sea level rise, and probably more,” said Steve Nerem, the leader of NASA’s Sea Level Change Team, in a statement. “But we don’t know whether it will happen within a century or somewhat longer.”

Scientists predict that approximately one-third of the sea level rise can be attributed to the expansion of ocean areas with warm water, one-third from retreating mountain glaciers, and one-third from ice fractions of the massive Greenland and Antarctic ice sheets.

NASA’s research also indicates the sea surface is not rising uniformly at all regions due to local differences in ocean currents and natural cycles. This is particularly the case for the West Coast of the United States where sea levels have actually fallen over the past two decades, effectively hiding the impact of global warming. But this could change over the next decade, with accelerated rates in the rise of the sea level following years of stagnation.

Last year, Vancouver City Council reviewed a report that revealed some of the most urbanized and densest areas of the city are at high risk of flooding. The city has since designated much of its coastline areas as a flood plain, including much of False Creek, the False Creek Flats, Chinatown, Port Metro Vancouver, Coal Harbour, English Bay, Kitsilano, Point Grey and the north arm of the Fraser River.

To address the issue and potential costs in the future from flooding, planners at the time recommended approving a building bylaw that raises the flood construction level (FCL) within flood plains by one metre, to a requirement of 4.6 metres.

“[The new FCL] will ensure that buildings constructed today are designed for the current flood risk and the flood risk that will exist throughout their expected lifespan,” the City report states. “Applying appropriate FCLs is a cost effective first step that will be complemented by larger infrastructure projects that may be required in the future.”

Flood protection measures and infrastructure in Metro Vancouver, to meet an estimated three-foot increase in the rise in sea levels by the year 2100, could cost $9.5 billion. About 300,000 homes could be damaged by major floods due to an insufficient dike system.

A 2013 study by the Organisation for Economic Co-operation and Development named Vancouver as one of the most vulnerable cities in the world to sea level flooding. 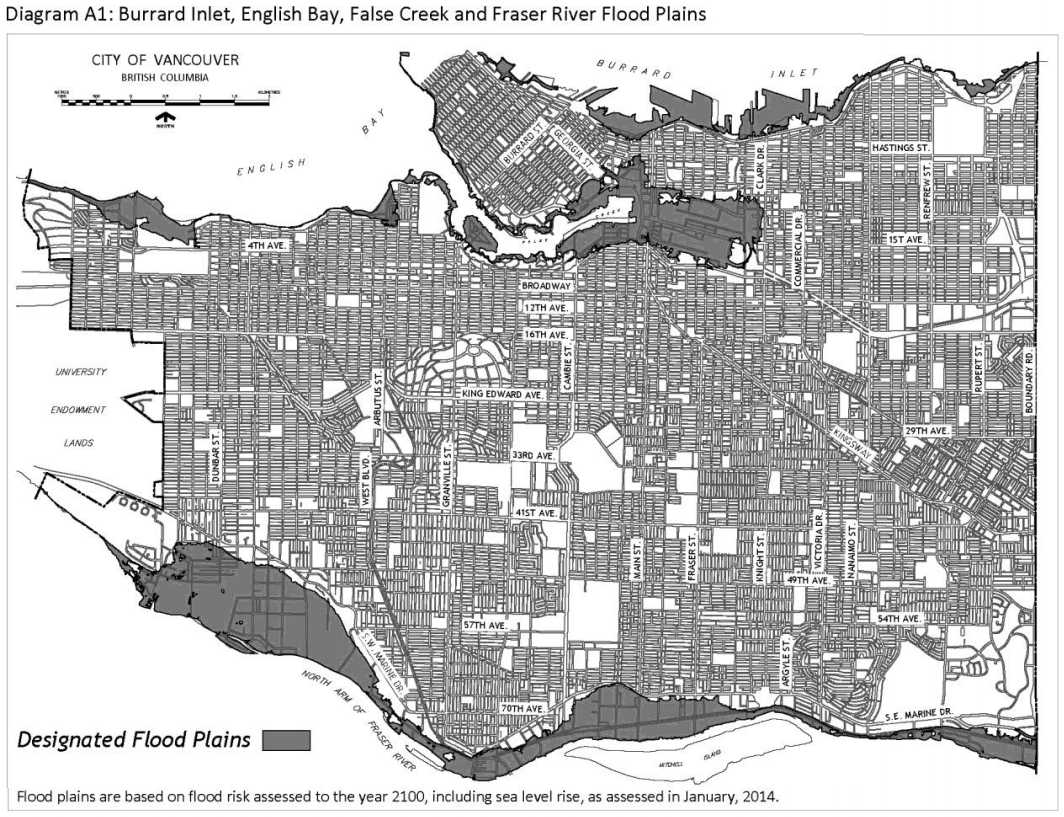