Since its first appearance in 1944, Tennessee Williams’ classic tale of a shattered, depression-era, Midwestern family fighting to stay together has been reproduced time and again by companies, both professional and amateur, across North America. Appearing at the Jericho Arts Centre until December 21, The Fire Escape Equity Co-Op’s production of The Glass Menagerie rides a fine line between amateur and professional – coming remarkably close to, but never fully realizing its full potential.

Williams’ semi-autobiographical memory play begins with Tom Wingfield (Scott Button) introducing us to the story about to unfold. Tom’s mother, Amanda (Marilyn Norry), a former Southern belle who is overly fond of reminiscing about her glory days, is concerned about the future of her family. Especially worrisome is her debilitatingly-shy daughter, Laura (Christine Quintana), who spends most of her time listening to old records and playing with her assortment of glass animals. At the behest of his mother, Tom brings home Jim (Graeme McComb), a gentleman caller, in an attempt to secure Laura a husband.

An undeniable stage classic, the enduring relevance of this story is in the dilemmas facing the Wingfields – struggles which many families continue to battle today. Examinations of issues such as financial dependency, emotional abuse, grief and loss permeate the thick, oppressive atmosphere that threatens to suffocate the family.

The first act, which focuses primarily on Amanda’s remembrances of the past and misgivings about her children’s future, provides plenty of breathing space. At times, the energy is high and driving, but at other times, it wanes and plateaus. Norry is convincing as the matronly head of the Wingfield household but tripped up several times on the character’s often verbose retrospections. The strongest performance comes from McComb, whose boisterous energy and natural chemistry with the other actors (especially Quintana) makes the second act surpass the first in practically every way. 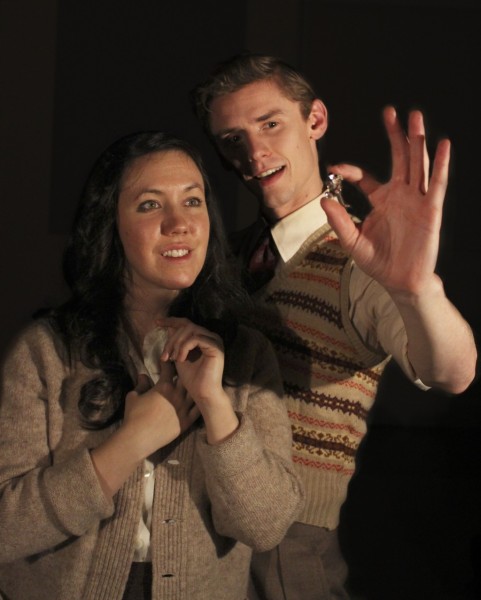 The set is simple but effective, affording the actors with plenty of playing space and visually-appealing arrangements that help convey each character’s struggles and relationships. The live violin music and sound elements, provided by Masae Day are an exceptional touch that provides a sense of wonder and nostalgia. Unfortunately, there were numerous easily-avoidable mistakes in running the lights and sound effects that distracted from the piece.

This production likely would have benefited from more rehearsal – time to mend the cracks which, though barely visible at a distance, become more conspicuous when examined. While built on a strong foundation of respectable casting, solid design and time-honoured text, what this Menagerie seems to be lacking is a final polish to really make all the elements come together and shine their brightest.