Last week, we had the pleasure of joining Dudoc Vancouver‘s Wilco van Bemmel and This City Life blogger Jillian Neve to discuss “Building a City for Children”.

We obviously have a vested interest in making cities great places for kids – with a nine and six year old that we are slowly giving more freedom. For our part of the presentations, we focused on how kids travel through the city, and how – over the course of four generations – they lost the right to roam. 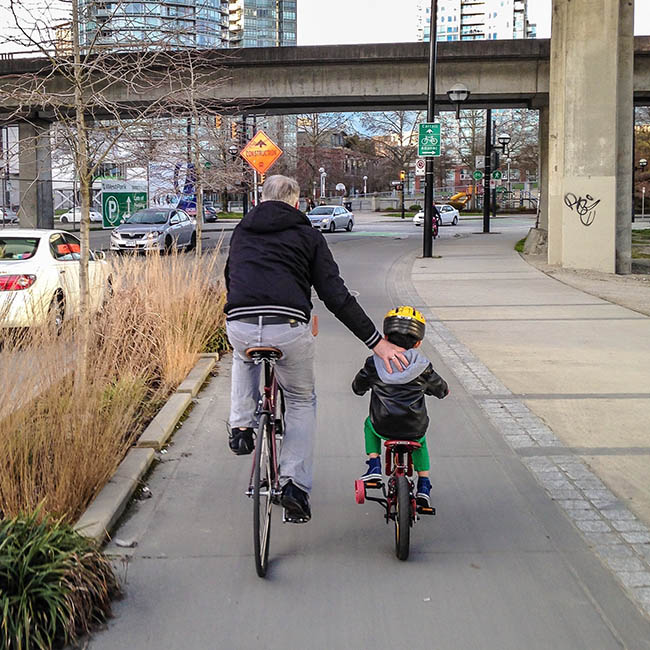 We’ve all sat through conversations with our grandparents where they talk about how far they used to walk to school, friends’ homes, etc. We’ve also heard how our parents used to ride their bicycles throughout their city liked they owned the place, meeting up at the local park and hanging out until the streetlights came on (or even recall doing it ourselves).

For our children, however, it is extremely rare for them to travel on their own past the end of their own block, if they even have that freedom.

Be it the bombardment of stories in the media, or the value placed on children now many are waiting longer to have kids, the default is to think the restrictions to their travel habits are due to “stranger danger”. When you speak to the average parent in the city, though, it becomes clear the larger reason behind our fear is the volume and threat of automobile traffic. 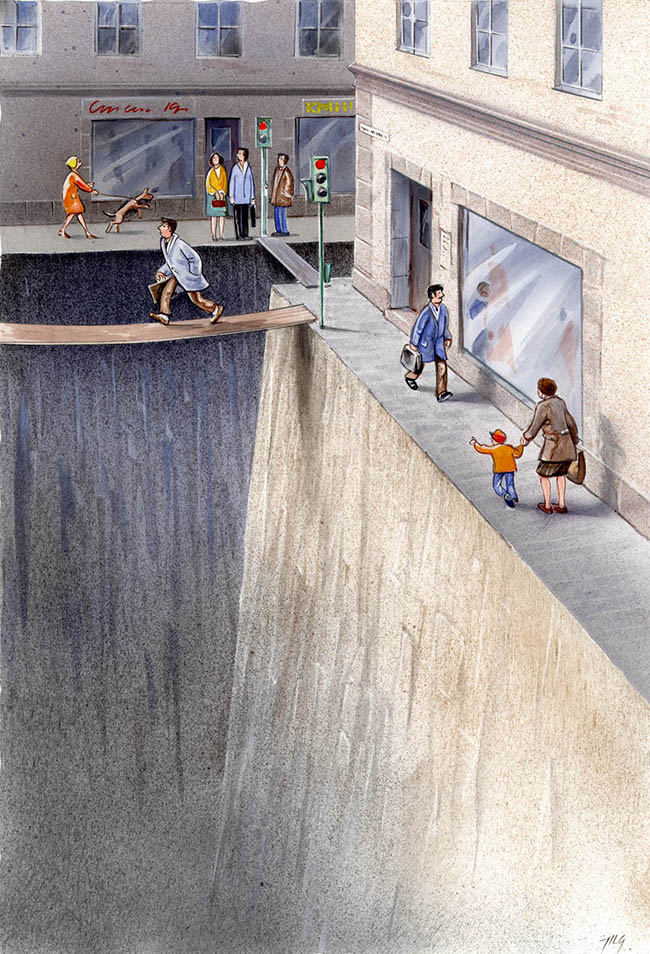 How our cities appear to our children. (Image: Vision Zero Sweden)

In our talk, we looked at what holds us back from letting our children roam more freely. Specifically, we examined our own kids’ journey to school, a short trip we’ve resolved to let them start making on their own in September. Travelling through the city as an adult can be difficult, but when viewed through the vulnerable eyes of a nine year old (like our daughter), the challenge grows.

The biggest barriers always seem to occur at intersections: such as the faded, unprotected crosswalk our kids cross en route to school (where 10th Avenue meets Victoria Drive). Crossing the street becomes a game of chance, where their fate lies in the hands of motorists racing from one red light to the next. 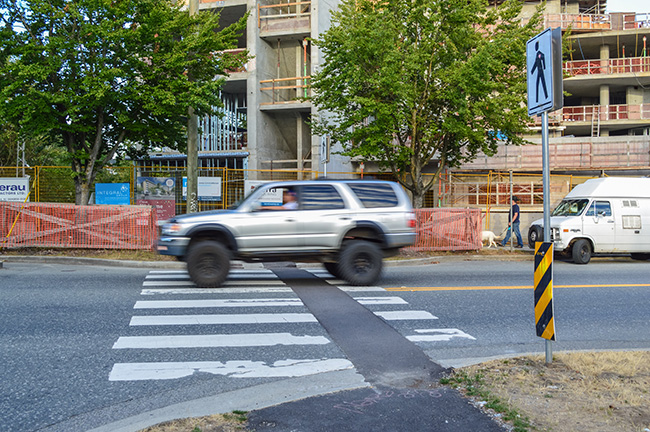 Then there are alleyways and driveways intersecting with sidewalks, where the pathway all but disappears, leave one feeling they are trespassing in car territory, regardless of the fact that pedestrians have the right of way by law. 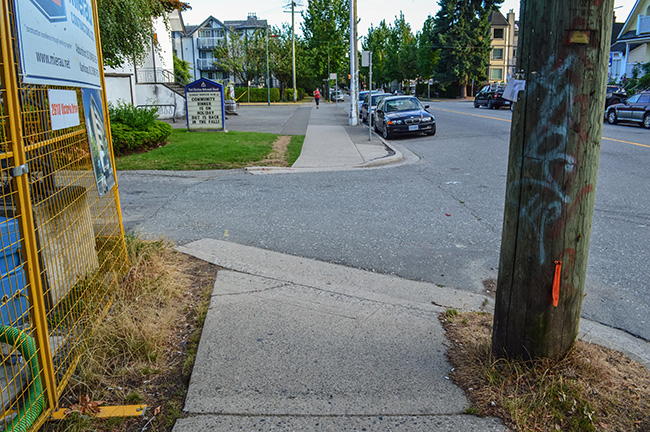 Thirdly, there are beg buttons at controlled crossings, located mere inches from high speed traffic, while the blue tape placed at the intersection to identify the safe place to stand sits a foot behind the button. 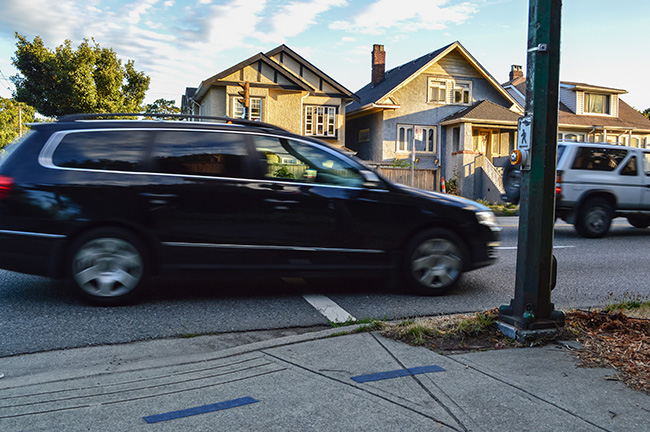 It is because street design inherently fails our children that many parents fall into a vicious cycle. Feeling there are too many cars on the road to allow their child to walk or bike to school, they end up driving them, only adding to the problem. Not to mention how the lack of that ten to twenty minutes of physical activity twice a day is contributing to the obesity rates in our children. Currently, one in three children in Canada are considered overweight or obese. 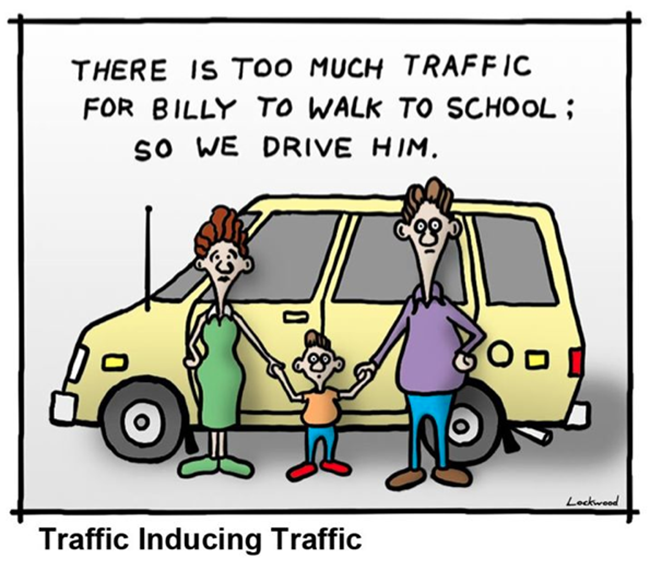 While the trip to school isn’t the only solution to this serious health concern, it’s certainly a start. Designing our streets to give pedestrians and cyclist priority will in turn create safer means of travel for our most precious citizens. Changes like raised crosswalks, protected bike lanes, continuous and visible sidewalks and even reduced speed limits are small ways to make that happen.

Dutch cycling scenes in a British context (Image: The Alternative Department for Transport)

Infrastructure alone is not the magic bullet to restoring our kids’ freedom to move around the city without us, but it will certainly help. There also needs to be a massive culture shift, one where we recognize that our children are currently the safest they’ve ever been. It has being well documented that hyper-parenting has failed – young adults entering the “real world” feel lost, having not enjoyed the freedoms and opportunities to learn from their mistakes, like the generation before them.

One of these 7-year-olds walks to school. The other is driven. (Image: Kindundumwelt)

It is time to learn from our own misgivings as a society and ensure the current batch of young children and teenagers learn to live out from under their parents’ watchful gaze. Just thirty years ago, when we were the same age as our youngest child, we had that freedom, and we survived to tell the tale. Let’s now give our kids that same freedom, and watch as they flourish.