Tech is not my writing forte, and I would not usually indulge in app analysis, but a recent discussion with friends about the girls-only app Lulu really caught my attention. Originally beta-tested on female university students, Lulu proved to be a success. And last year, the app was released to the public, and with it came candid endless reviews of men in the form of scores and hashtags.

So what exactly is Lulu and how does it work? Well, as mentioned, it is a female-only app. The way it works is it connects through your Facebook account, which is how it finds out if you are male or female. Over the weekend, one of my best guy friends requested that I download the app in order to see if he has been “rated” on this thing. For his sake, I got Lulu, and our afternoon was spent examining how the app works.

As soon as I opened it, it showed me a list of all my guy friends (pulled from Facebook). This list is pulled without their consent (obviously, as this app keeps your reviews anonymous, and guys don’t even know the app exists). As I scrolled down through the list, I was mortified to see some of my friends’ ratings… from 4s to 7s, some 8s. But even worse are the reviews, which are all listed as hashtags.

It seems these are preregistered hashtags as they are often repeated – #WillCarryYourLuggage, #TookMeToMcDonald’s, #GonebyMorning and #QuestionableSearchHistory are just a few of what are listed on reviews. What was more alarming was not only does it connect to show my Facebook guy friends, it can show you “Guys nearby.” And so there we were, looking at random Vancouver men and their anonymous ratings. 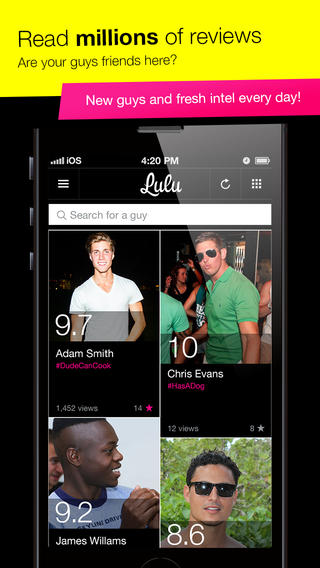 According to Lulu’s website, the developers (who are two Canadian women) created Lulu “to unleash the value of girl talk and to empower girls to make smarter decision on topics ranging from relationships to beauty and health. Girls can see and create reviews of their male Facebook friends. They can also see and create reviews for guys who have downloaded the Lulu app to get discovered by millions of girls.” Personally, I have yet to meet a guy who has purposely downloaded the app to “get discovered.” Although, my research lead me to find out that there’s such thing as LuluDude – a separate app created for “the boys because we block them from accessing Lulu.”

LuluDude is where guys can manage and edit their profiles, which are visible on Lulu. On LuluDude, guys can edit their relationship status, add profile pictures and use hashtags to describe their best (and worst) qualities and their turn-ons (and turn-offs) as well as request reviews from girls. LuluDude is not an app for guys to review girls. It is good to know that there are males out there that are accepting of this app – although not many guys I knew seemed comfortable with the idea of their photos and information being uploaded without their consent.

The Lulu website states that it “respects your Facebook privacy settings” yet when I posted about it on my Facebook, I got tons of messages from guy friends who had no idea they were on there, and who asked how to be removed off the girls-only app. Which brings me to that point. Guys, there is a way to remove yourself from the app. Follow the instructions here.

As I said, tech is not my forte, and normally I wouldn’t be bothered by apps of any kind. But there was something strange about reading reviews on my friends and on the local strangers that popped up on Lulu randomly. And for that reason alone, I wanted to share this. So…Happy Valentine’s week!