Since the announcement that ‘Blueprint’ would make an annual tradition of bringing in big name artists every Family Day weekend from here on out in an event dubbed, “Get Together,” Vancouverites and EDM lovers alike have been rejoicing in the wake of the decision. Last Sunday, the electric confines of the PNE Coliseum would provide a chance for fans to judge the star studded sets of Morgan Page, Hardwell and Above and Beyond for themselves.

Armed with nothing but a media access pass and my camera, I felt a surge of adrenaline rush through my veins, as the heavy set bass emanating from the main stage introduced itself for the first time, sending my ear drums into a rallied frenzy. Maneuvering our way in between hordes of screaming fans, we finally entered the media section in time to catch a magnificent view of  Hardwell, who was taking over from Morgan Page, who, in turn, had just warmed up the crowd with familiar hits such as “Carry Me,” “Missing” and “The Only One” off his album, “In The Air.” 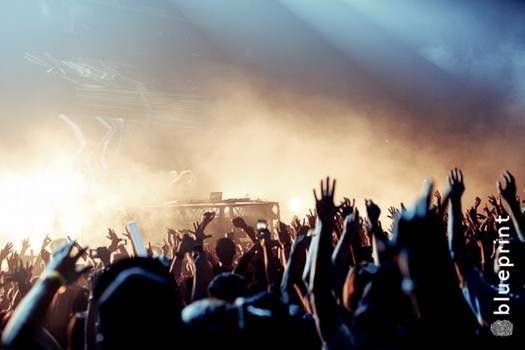 The transition between Morgan Page and Hardwell was a smooth one, with the Dutch DJ spinning a set of mainly progressive house tunes such as “Spaceman,” “How We Do” and “Kontiki” to name a few. The legion of Hardwell fans at the show, mostly sporting black t-shirts with his name, bobbed their heads in a sort of unintentional and synchronized frenzy as the heavy bass loops reverberated off the ceiling and floors of the arena. 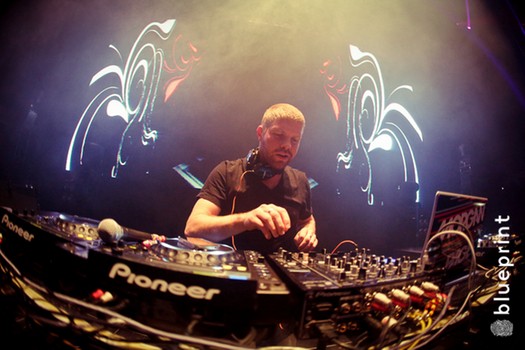 Arguably the highlight of Hardwell’s set, or the night for that matter, was the execution of the famous “sit down” maneuver – an attempt to get hordes of fans in an arena to sit or crouch down on the floor for four seconds and then jump up to the rise of the beat. The attempt went off better than expected, as fans in the packed Coliseum responded well to Hardwell’s repeated cries for the whole arena to “sit down.” As four seconds elapsed, the familiar tune of Tiesto’s “Maximal Crazy” mixed in with Hardwell’s “How We Do” came blaring in through the speakers, washing over the crowd in a moment of pure euphoria.

After Hardwell had enticed the crowd with a bevy of different house tunes, it was time for the trance legends themselves to take the stage. The last time they were here was last June for a double show melee at Celebrities and the Commodore.

Paavo and Tony McGuiness, two thirds of ‘Above and Beyond’, set out to play a set of two hours, which would signal the end of the “Get Together” festival. Overall, being a diehard fan of progressive trance, I was a little disappointed that they chose to abandon their roots and switch to more of a “house music” theme to appease the all ages crowd.

Familiar tunes such as “A Thing Called Love” and “Sun and Moon” were the highlight of their sets for me. During their rendition of “A Thing Called Love”, the image of a giant heart was etched into the screen behind the main stage, perhaps signifying a Valentines Day theme for the crowd. During “Sun and Moon,” a screaming fan was ushered over the railing to press a button, which would release the drop of the massively popular track. Throughout the set, Paavo and Tony added numerous gimmicks to their sets, from meaningful messages typed on the screen to walking across the stage and interacting with the crowd. A stream of confetti signified the end of their set, and when the streamers cleared all that was left on the screen behind the main stage was the message: “Life is made of small moments like these” 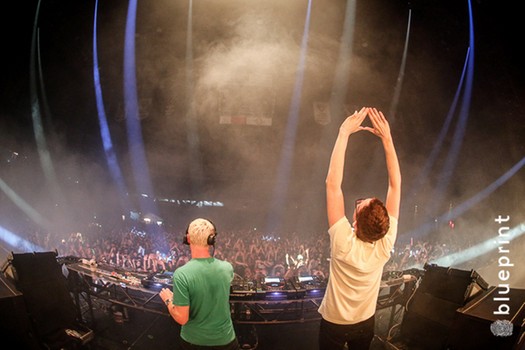