Hey Sportsnet. I just wanted to have a bit of a chat with you guys about the upcoming hockey season.

Look, I know you’re super excited about how you stole hockey from TSN, and now TSN is stuck with five channels to show darts and curling on. You guys have been the underdogs for years, and have always struggled playing second fiddle to your big brothers at TSN. We all remember the depths to which you sunk in your attempts to beat out TSN in the ratings, going so far as to bring in Eklund, dancing girls and pizza for the 2007 trade deadline, so it’s really nice to see you turn the corner in the hockey media wars with actual content. There is just one problem people in B.C. have: Mark Messier.

So here’s the deal. There are several personalities on TV that were part of that 1994 Rangers team who seem to revel in rubbing their victory over Vancouver in our faces. Glenn Healy and Nick Kypreos have both enjoyed taking some verbal shots about their victory back in 1994. We learned to deal with that, either through watching YouTube videos of Kypreos being knocked out, or by watching videos of Healy attempting to stop a puck. Both were very therapeutic and allowed us to bury our grudges and move on with our lives.

The problem is that Messier is the one thing in Vancouver that we would just prefer to not see anymore. We have seen his gloating face taking that Stanley Cup from Gary Bettman, and begin wildly laughing as he pumps it up and down enough times that we could probably draw it from memory with our eyes closed. “No no, you forgot his forked tongue sticking out, I definitely remember a forked tongue.” 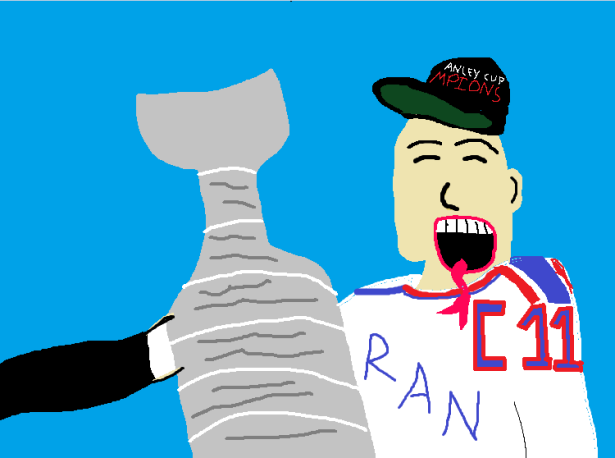 Seeing him in opening montages of anything to do with the NHL playoffs is something we learned to kind of live with. We didn’t like it, but we learned to use those moments as a time to turn away from the TV and ask someone to grab us a beer out of the fridge.

Now, of course, Mark Messier is part of your hockey package, seemingly showing up out of nowhere, with no advanced warning, just to say hello. He’s like an awful neighbor that you thought had moved away, only to find out your parents rented out the basement suite to him, and now he’s upstairs washing his underwear in the sink and eating all of our food.

On top of appearing in hockey segments during intermissions or before the games, somebody decided to make Mark Messier Sportsnet’s NHL Ambassador (which I assume gives him diplomatic immunity to blot out the sun and destroy happiness in Vancouver whenever he wants) which means we see him in commercials. All the time. Commercials all of the time.

So essentially we in Vancouver get a visit from Mark Messier during almost every commercial break. Just a quick, friendly reminder from the man who stripped the “C” from Linden, beat the Canucks in 1994, ran over an injured Linden by the benches in game 6, had three terrible years in Vancouver with his pal Mike Keenan (in which Messier seemed just fine with missing the playoffs) and eventually sued the Canucks for more money after he was gone, because hey, why not. It’s like inviting your ex over dinner to pop in the room every 15 minutes to remind you of the dark period of your life. “Hey, remember that time I slept with your best friend and then threw up on the cat? Yeah….Go Rogers Sportsnet!” This is not fun for us.

I know regional broadcasting isn’t really your thing anymore, I get that. I understand that the East is becoming the central hub for all of your hockey productions. But I have to think someone in marketing has to realize there is probably not a worse person to become the face of a product you want to sell in BC than Mark Messier. Mark Messier is so disliked in B.C. I’m pretty sure all commercials played behind a Messier Sportsnet ad will see a significant drop in revenue. 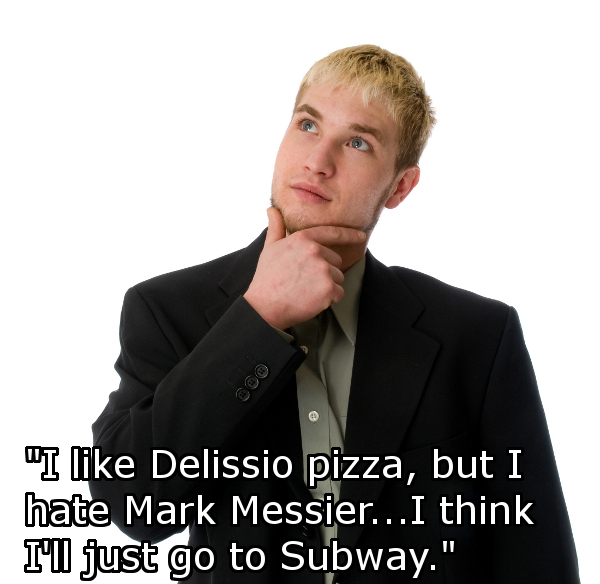 I beg of you, pick something else to show in B.C. Hell, we’ll even take blank dead air over a Messier commercial. Anytime that sweet sweet dead air comes on, we’ll all smile, sit back, and think to ourselves “Phew, thank god it wasn’t Messier.” We’ll buy whatever products you’re hawking; just send us a quick e-mail. You want us to buy Kraft Dinner? Let us know it will keep Messier off our TVs and we will do it.

Please. Do the right thing. Keep Messier off of our TVs and where he belongs; somewhere in the east, far far away from Vancouver.