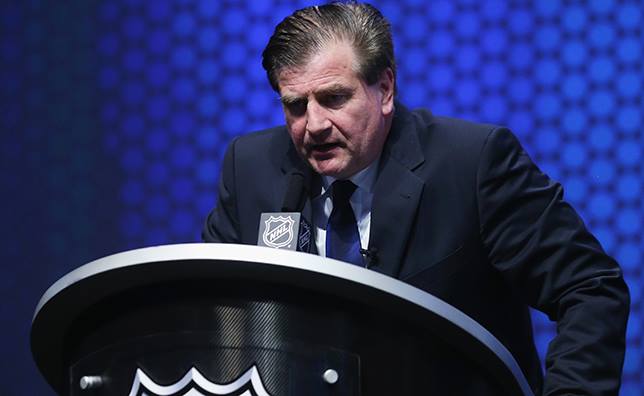 “I love the smell of draft picks in the morning…” one imagines Jim Benning saying, cigar in hand, the day of the NHL draft.

The start of summer can be a time of change for many NHL franchises. Not only do teams get to mould their future by drafting the next crop of superstars at the draft, they then get the chance to spend a crap ton of money on overpaying for free agents in hopes of a more immediate fix.

It is both a time of hope and sorrow for many fans, but it is undeniably one of the most exciting times of the year. It’s like waiting up on Christmas Eve to see if you’ll get that video game you really wanted, or simply another pair of socks. Used socks that are past their expiry date and were too expensive and that you have to wear for seven years because they have a “No Movement Clause”.

Jim Benning finds himself at the edge of darkness during this time. On one hand there is the re-build beckoning to him, telling him to join her in the calm waters as she sings her siren songs of drafting young players, and jettisoning veterans. Building towards a faster, younger team, one that might take a while to build up, but when it does, oh boy, watch out world, because here come the Canucks faster than a cyclist switching lanes on Broadway!

On the other hand there is the re-tool calling out to him, catcalling him from the construction site, telling him he’d look real pretty with a Lucic or Eriksson under his arm. Hell, why not throw in a Brouwer while you’re at it. Why wait for the future when you can grab a six pack of beer and start playing some poker and possibly land that Royal Flush you’ve always been chasing. “Look at Edmonton!” they’ll cry, as proof that a rebuild isn’t all that reliable.

Ballroom 4 has been occupied by #Canucks staff all week and today is no different. #CanucksDraft pic.twitter.com/np7U7ALvUe

Which route will Jim take?

That’s the major question everyone is asking themselves right now. Nobody really knows if we’re being honest. In Vancouver, Benning lives in a world of assumptions and reputation. Some earned, some not so earned. It’s easy to crack jokes about the Canucks based off of the last season.

Canucks management hasn’t made things easy for themselves from a PR standpoint. Mixed messages, conflicting statements, whispered sidebars to fans, there’s been no shortage of material for us on Twitter to have a laugh (or a deep cry in the shower) over. Say what you will about the cold, disapproving step-father approach of the Gillis regime, you have to admit they at least looked like they thought they had a plan.

With the current regime, that is probably the number one frustration for fans. Nobody really knows what’s going on, and it doesn’t look like management does either. There is seemingly no posturing with this team. When they say “we don’t know what we’re going to do” you honestly believe they really don’t know what they are going to do. If they claim a player has an “upper body injury” it’s gotten to the point where you actually believe they have no idea what’s wrong with the player, they just have a general idea where something hurts.

“Edler is day to day with an owie to his leg.”

Which seems harsh. It might not be the truth. But that’s the price one pays for working in a Canadian market with a losing team. Everything you say is heightened. Even the smallest things gain perceived importance. For people like Benning and Coach Desjardins, people who don’t look comfortable talking to the media at the best of times, this can be a nightmare scenario. Trevor Linden is the polar opposite of these two and talks like he thinks he can charm his way out of any scenario. Yet in a losing situation this can come across as used car salesman-esque at best, and ignorant and oblivious at worst.

This all creates an odd cognitive dissonance in the perception of management. They seem like they are telling the truth (which is odd in pro sports), as if it was mandated to do that to separate themselves from the cloak and dagger Gillis regime. They just seem like they have different approaches and end games for the team.

Linden: looking at draft, we haven't drafted a defenseman since Luc Bourdon. You don't trade for a top 4 defenseman. Need to strengthen D.

The problem with being more honest in sports is you open yourself up to more criticism. By showing people the process, they can critique you more and more and question everything you do. It’s that weird yin and yang of sports. People complain about how boring sound bytes are, yet the minute players or management deviate from that path, people lose their shit over it. Suffice it to say, confidence in Canucks management is very low as a result of this.

The one thing Benning does have going for him, though, is this idea that he’s a scouting genius. You’ve all heard the stories by now, it has been hammered into our heads since day one. Benning comes from a family of scouts. His family has been scouting so long that they scouted the scouts who scout the scouts. Something like that at least.

There’s no real proof of his drafting genius yet, but that’s the bedtime story we all remember so we grasp onto that and hold it dear to our hearts. That isn’t to say he’s a poor scout, not by any means. He’s had some promising picks over the last few seasons, ones that could end up being large parts of the Canucks future. He might very well be all that he’s cracked up to be. It’s just the expectations of his drafting have been heightened to such a large degree that the bar is getting higher and higher for him to meet. So many sentences end with “ok that wasn’t great, but at least he’s a good scout” that it feels like this draft has more importance than ever. All we can do is wait and see how it plays out.

So what do we know about the next season then?

Vrbata, Weber and Bartkowski will not be re-signed, according to Benning. #Canucks

Weber and Vrbata seemed like forgone conclusions. Vrbata seemingly had issues with the role that was promised to him and what was delivered. Weber experienced much of the same, with both players appearing unhappy with how things played out.

Bang Bang Bartkowski was a question mark, as management seemed to love the tools he had, but most would agree his work in the defensive zone was far too much of a liability to try and force him into the already overcrowded defensive mix for next season.

Benning says he will contact Lucic's agent after the draft. #Canucks

Lucic is another big question mark for the Canucks. “Bring [x] home!” has long been the battle cry for fans in the NHL, and add in the fact Lucic is a former Bruin, it’s hard not to imagine Benning going all in for him. Lucic signing a huge deal with the Canucks is the stuff of nightmares for many, although some hold a soft spot for the idea that Lucic can come in and be the monster he was in 2011. There’s been enough smoke around Benning’s desire for the infamous “Boston model” that any player that is over 6″2 could likely be on their radar.

The proof is in the pudding however. Maybe the Canucks make some savvy signings. Maybe they cripple their salary cap chasing giants. Maybe they draft Dubois. Maybe they reach down for Logan Brown. We won’t know until a couple of weeks from now, which is what is so exciting about this timeframe. It’s easy to get caught up in the gloom and doom, and it very well might end up being as bad as people are predicting. But the fact there’s a chance it might not? That’s the spirit of sports right there. Hoping against all logic and reason that things work out for your team. That somehow this is the year things start clicking into place for what will become that eventual Stanley Cup winning team.

If anything, Canucks fans will have a better idea of what direction the team is heading in come August. That alone is more exciting than any update on Tony X’s whereabouts.