Previously restricted only to school groups and special events, the Vancouver Aquarium is opening up some of their behind the scenes operations to the general public until April 30th. 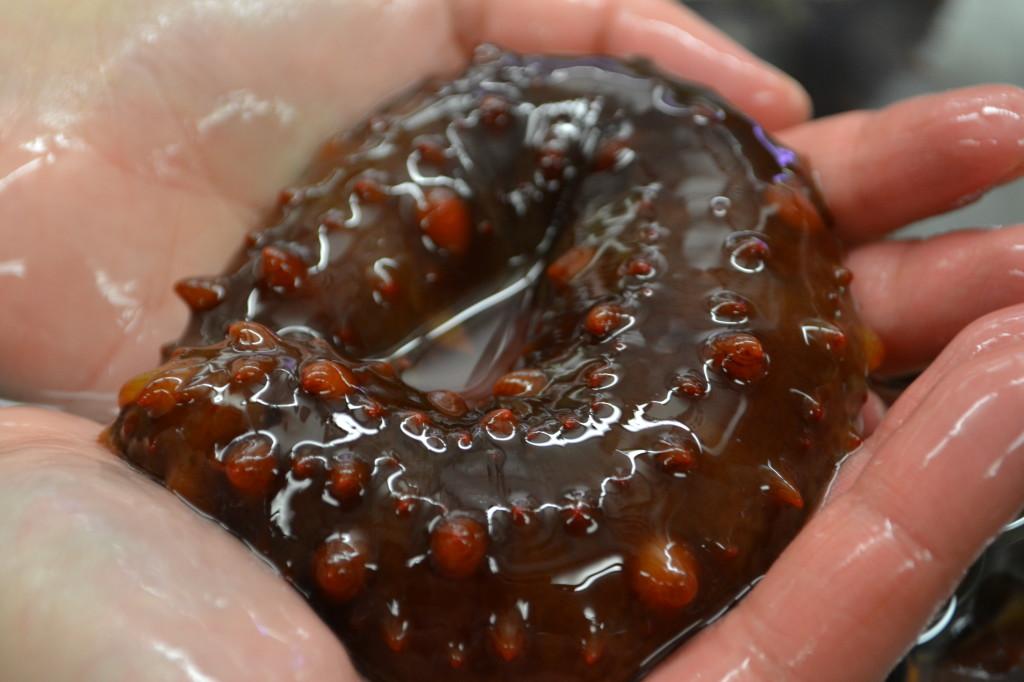 Features such as the wet lab, animal training sessions and the above-tank feeding area will be accessible as part of a new program at the Vancouver Aquarium. The goal is to give the public a glimpse of the work that is done behind closed doors and portray a clearer image of the conservation efforts put into place.

Randomly chosen guests are taken above the large tank to view the shark feeding area as well as meet Schoona, the rescued sea turtle face to face. 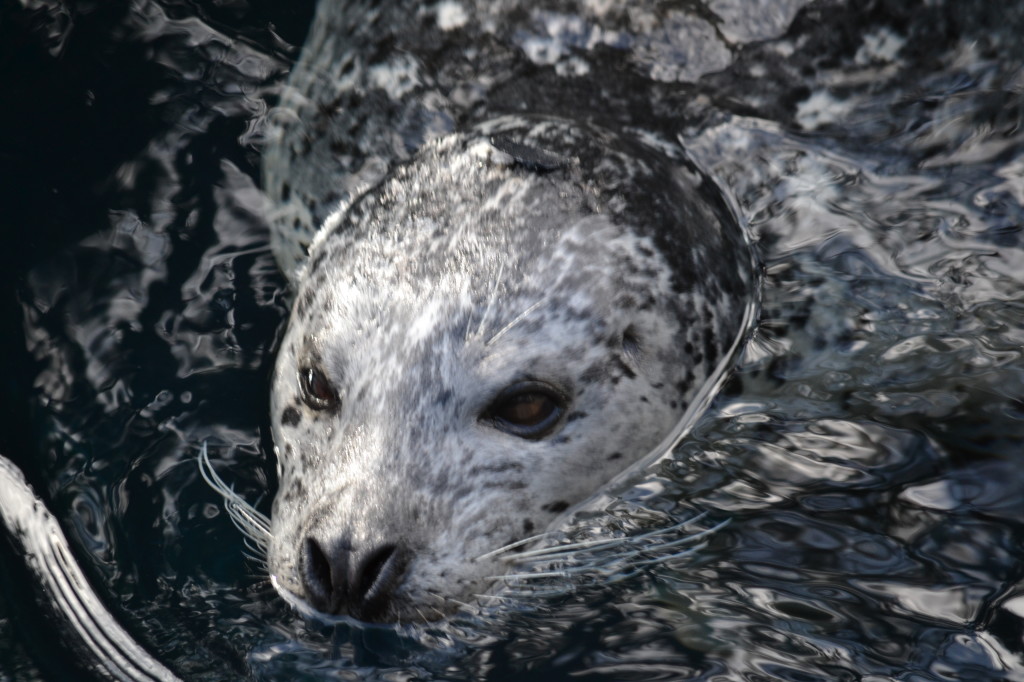 Also available as part of “Up Close”, is an opportunity to watch a animal husbandry training session with Hana and Helen the Pacific white-sided dolphins. The girls are run through a series of exercises which stimulate their brains and also serve a dual purpose. Many of the maneuvers are used to take blood-work, or to give a full physical examination. Including them into a fun stimulating session simply reduces the stress on the animals to do so. 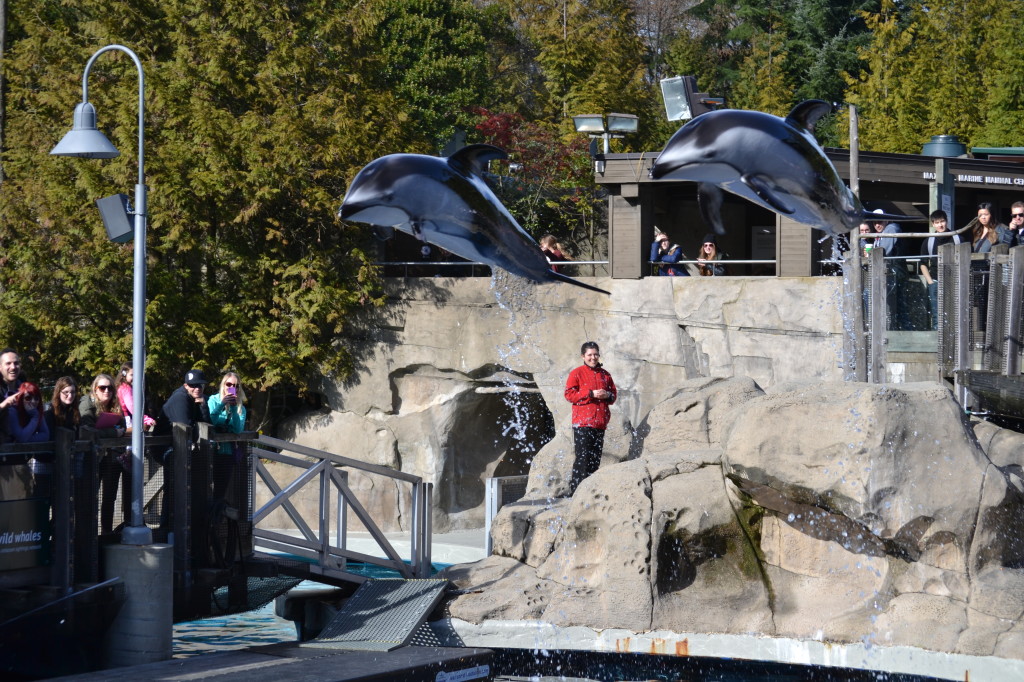 Rescued from the brink

A little known fact is the sheer number of animals in residence who were rescued, rehabilitated and planned to be released. They have merely been kept in captivity because they were unsuitable for release without presenting too high of a risk to their lives. 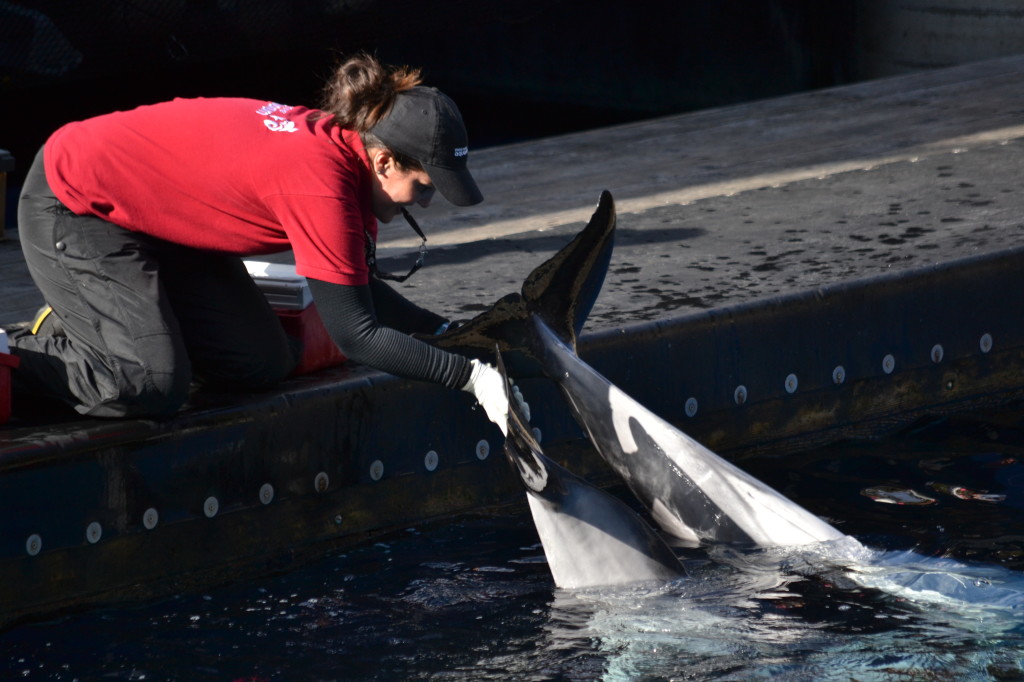 Both of the Pacific white-sided dolphins, Helen and Hana, were rescued and rehabilitated. They were rescued from fishing nets off the Eastern coast of Japan, the opposite coast from the drive fisheries. After extensive rehabilitation efforts, they were deemed non-releasable by the Japanese government. Hana was rescued in 2003 and was extremely emaciated when she was found and Helen was rescued in 1996 and was deemed non-releasable primarily because of her severe pectoral flipper injuries. 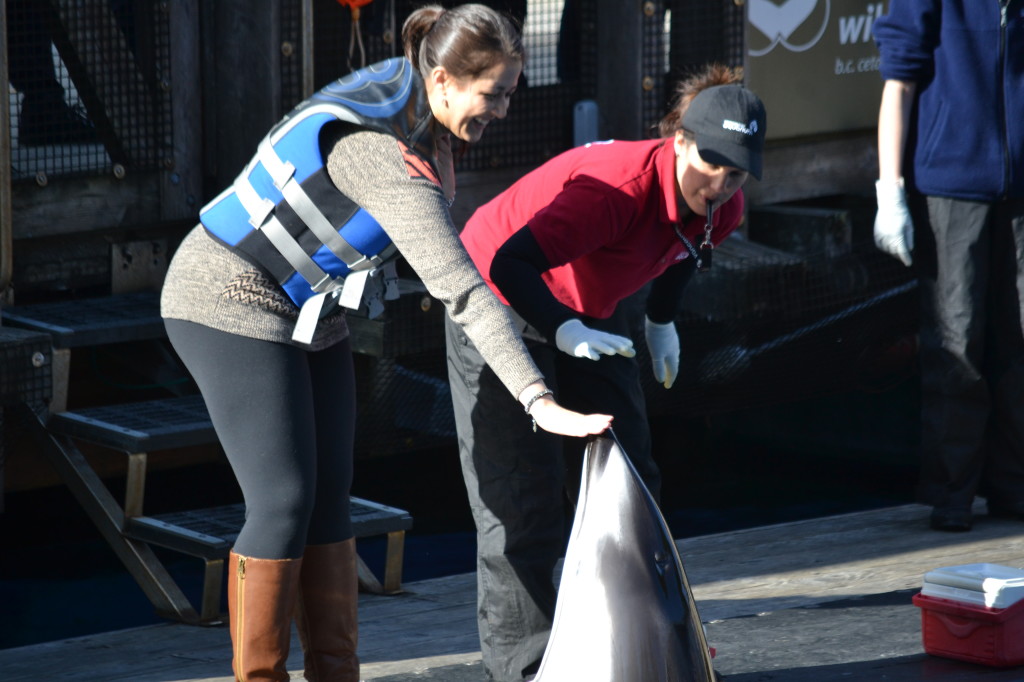 Helen and Hana are participating in important research that will hopefully one day help the conservation of their species. They are participating in a study to research why dolphins can’t detect fishing nets in the water, in hopes that one day we can help others avoid the same fate they faced.

The harbour porpoises, Jack and Daisy, were both rescued and rehabilitated. Jack, who was stranded at approximately five weeks old, was rescued in September 2011 by the Aquarium’s Marine Mammal Rescue Centre team. Daisy was rescued by the Aquarium’s Rescue Centre in 2008 and has been living at the Aquarium since 2009. After being deemed non-releasable by Fisheries and Oceans Canada, Jack and Daisy are the only harbour porpoises living in an aquarium in North America.

All four of the sea otters,Katmai, Elfin, Tanu and Walter were rescued and rehabilitated after being found abandoned as pups in Alaska. Elfin, Tanu, and Katmai’s story is chronicled in the Rescue Blog. Despite being found in completely different places, at different times, their stories bear some resemblance. Walter of course, has become the newest member and darling of the sea otter squad after a shot gun blast left him blind. He happily spends his days eating and swimming and has even been put on a diet to control his calories.

Schoona, the single resident green sea turtle, was rescued and rehabilitated after she was found suffering from cold shock. Since her rescue she has settled into her home at the aquarium and gained a voluptuous 200lbs. 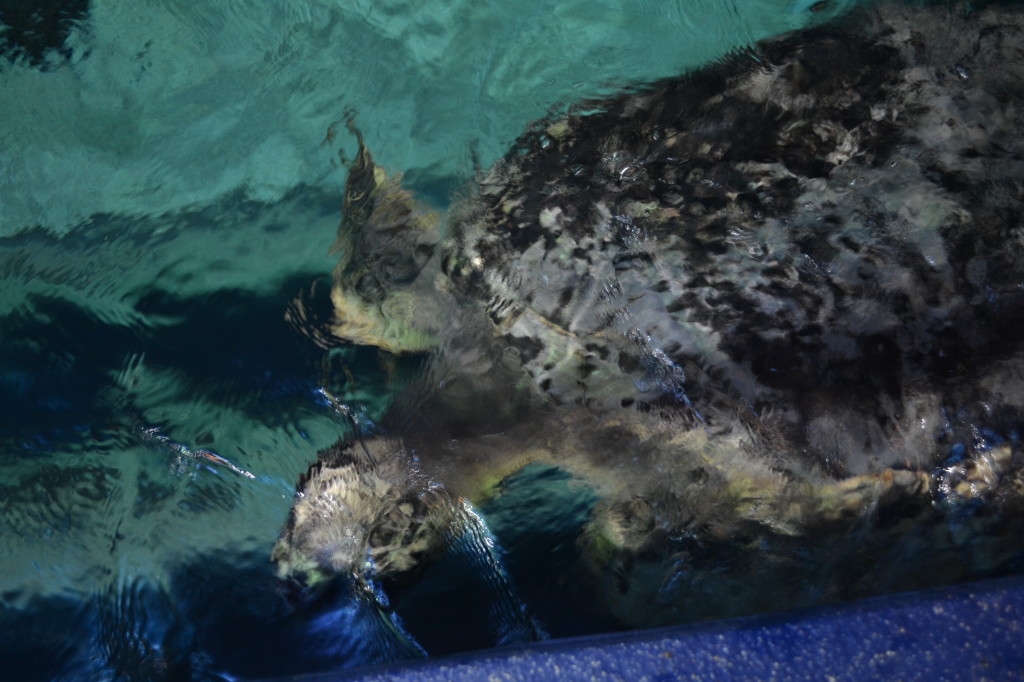 The Aquarium’s Marine Mammal Rescue Centre, which rescues approximately 150 marine mammals per year still maintains the goal to always release animals back into the wild if deemed fit to do so by Fisheries and Oceans Canada. 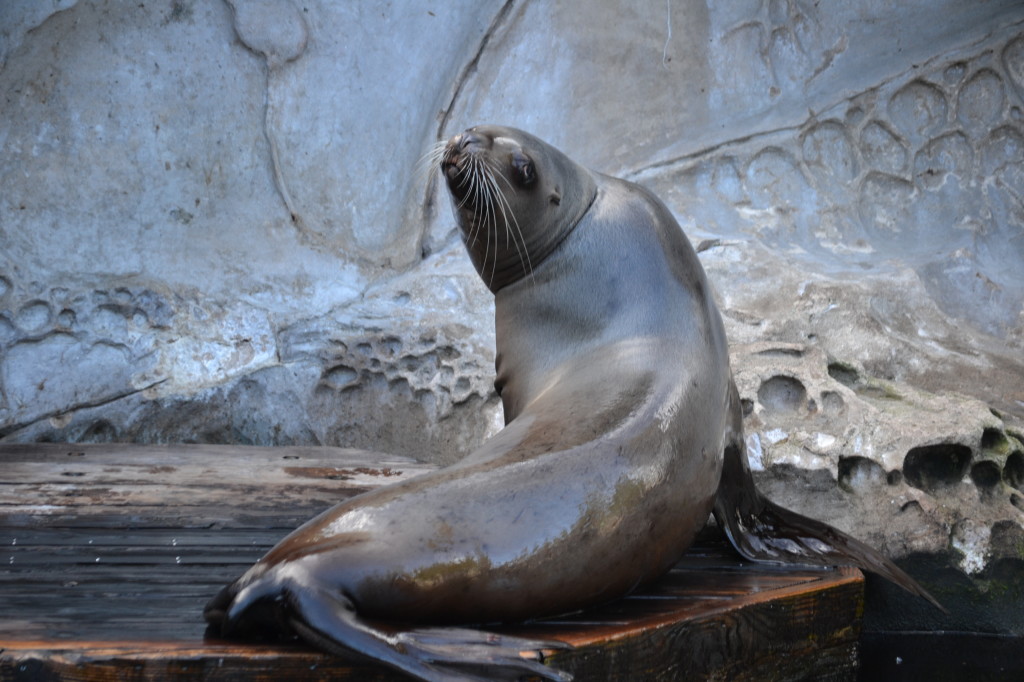 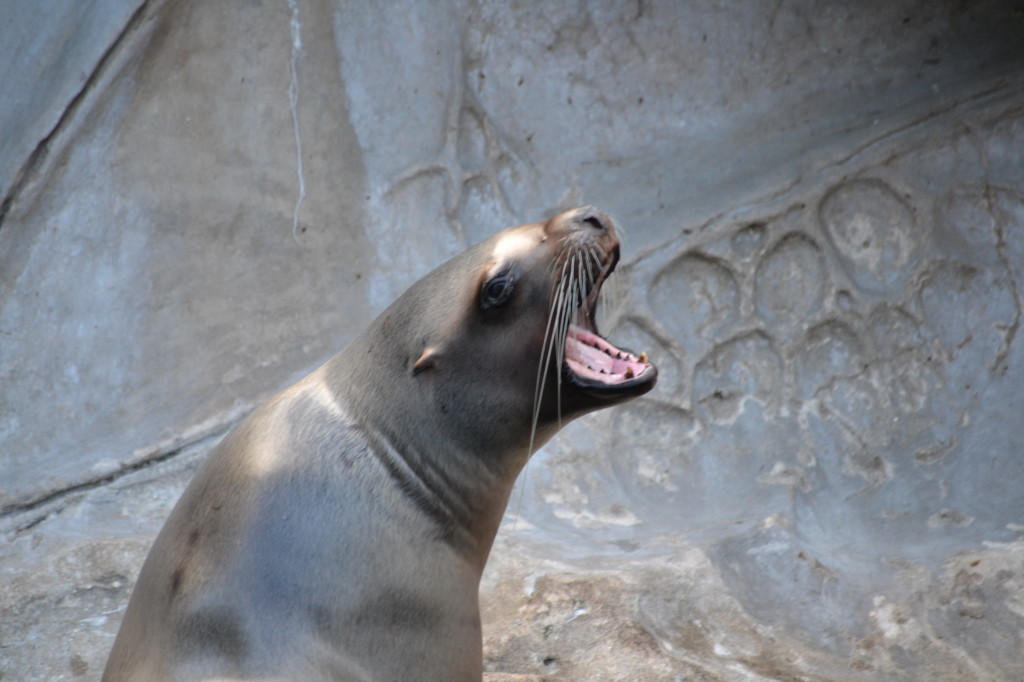