When it comes to drinking scotch, there’s the good stuff, and then there’s the incredibly expensive stuff enthusiasts may only dream of tasting. The Macallan’s rare 62-year-old and $25,000 scotch whisky in a Lalique crystal bottle is among the premium spirits that will be be showcased at an upcoming release and tasting event.

The Macallan’s 62-year-old Lalique-bottled scotch has aroma and tasting notes that may make you salivate (or wonder how all those flavours find themselves in a humble sip). Here’s how The Macallan describes it:

Rich and aromatic. Initial burst of treacle/toffee opens up to uncover raisin and blood orange and, deeper still, aromas of apple, sprinkled with ginger, cinnamon and chocolate. Layers of dark vanilla embellished by soft burnished oak.
Palate
Rich dried fruits, with raisin strongly to the fore. Viscous layers of sweet ginger, figs and cigar leaf, before the oak emerges, polished yet showing the complexity of age.

Like a hug you just can’t shake, this spendy scotch has a finish that is “long and embracing.” 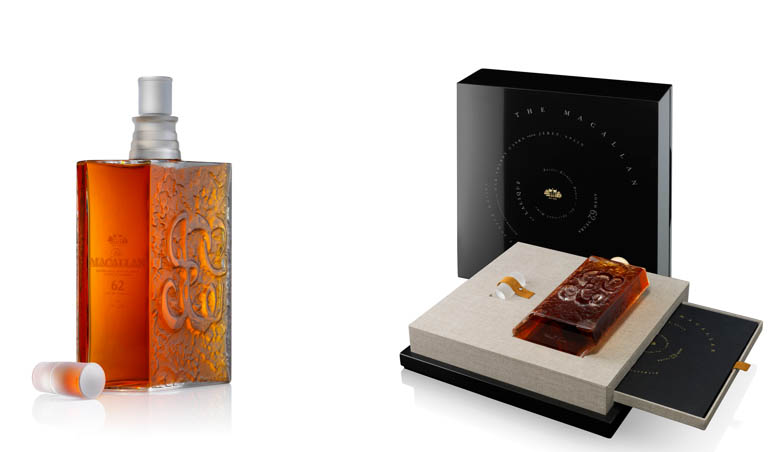 Images via The Macallan

The Macallan rarity is among several that B.C. Liquor Stores is touting as part of their 2014 Premium Spirit Release event on Saturday, November 1 at their 39th and Cambie Signature Tasting Room:

This year’s release is chock-full of whiskies from around the world – from Kentucky bourbons, such as Pappy Van Winkle, to premium Irish, Canadian and Japanese whiskies and award-winning collectible scotches, such as the Lagavulin 37-year-old. An exclusive single cask of BenRiach 1998 – hand-selected by BC Liquor Stores spirit experts – will be included in the release. The event also includes cognacs from Courvoisier and a small-batch tequila from Herradura.

But that $25K scotch is the “pièce de résistance” of the event, and it’s one of only 400 bottles worldwide. It is pretty mind-boggling to think that this liquid was “originally filled in American oak sherry-seasoned casks in November 1950.” So, any takers for that one bottle?