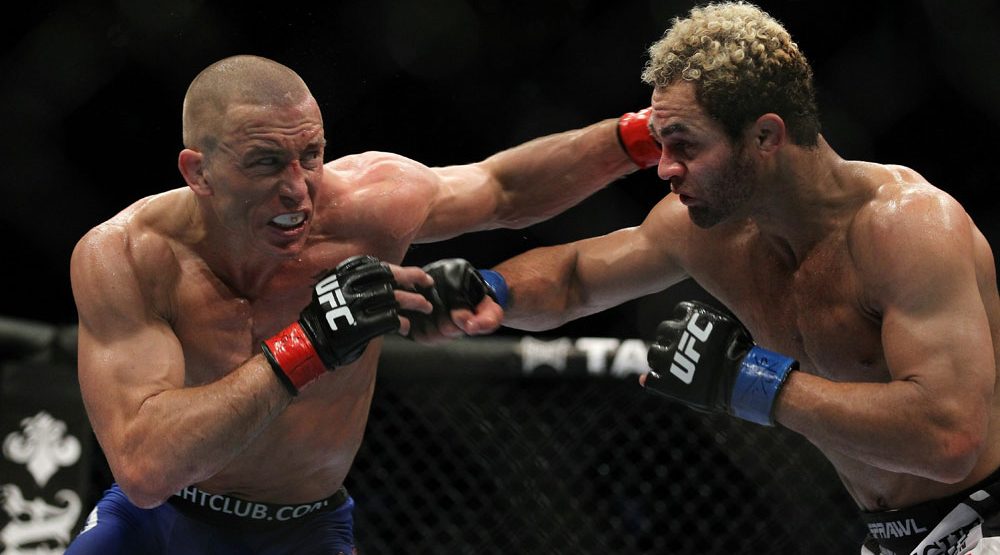 With reports just coming out that the UFC has been sold for a whopping 4.2 billion dollars, another left hook is coming MMA fan’s way as GSP is reportedly interested in fighting again.

GSP, arguably one of the greatest MMA fighters of all-time, and undoubtedly the best Canadian MMA fighter of all time, announced today that he’s got that itch to fight again. Nothing has been made official, it would still require UFC and GSP’s team agreeing to terms, but it’s hard to imagine a scenario in which the UFC wouldn’t do everything in its power to bring the legend back into the fold. GSP after all was always a strong PPV draw for them, and the thought of having ratings monster Brock Lesnar AND GSP with the company? That’s the stuff corporate wet dreams are made of.

Why would GSP come back you ask? Aside from the money factor, his competitive spirit appears to have been ignited in part by Michael Bisping.

“There’s two things that I’m very proud of – my welterweight title that I won and there’s another record that I hold for most wins in UFC history,” St-Pierre said. “Now I have someone who is challenging me in Michael Bisping.”

Both Bipsing and GSP are tied with 19 UFC wins a piece, and with rumors of GSP moving up to middleweight for a superfight with Anderson Silva floating around for years, it’s not too shocking to think GSP would jump at the chance at another title shot, even in a different weight class than the one he dominated for so many years. GSP even went so far as to lay the groundwork for a match with Bisping.

“I do not believe if I fight him he would send me back to a movie set. Yes, he’s bigger than me, but I believe I have more skills, more athleticism, and a higher fighting IQ than he does. The world doesn’t revolve around me, but if it’s a fight that the fans and the UFC wants to make, they’ve got my number, they can call my agent no problem. We can organize to make it happen and make an agreement.”

For those who don’t know GSP very well, that’s about as hard as he trash talks. Saying he has a higher fight IQ? That’s downright malicious for GSP. This is a guy who famously stated “he was not impressed” by Matt Hughes performance, and that was like a nuclear bomb of hatred from GSP, who later spent years apologizing for it, as is the Canadian way. He also once said he was going to go to his “dark place” to fight Nick Diaz, which considering it’s GSP, meant he probably tipped a waitress that night only 15% instead of his usual 20%.

But while many fans in Canada will be excited by this news (he’s a god damn Canadian hero), some might be hesitant to see him come back and tarnish the sterling reputation he built up during his first run in the UFC.

GSP is 35-years-old now, and has had several injuries over the years (most notably a groin injury, and later a torn ACL in his knee), which makes one wonder if GSP’s wrestling will still be as powerful of a base as it was at his peak. The lasting memory many people have of GSP is a decision win over Johny Hendricks that many people felt in fact GSP had lost. You have to wonder if GSP will still have what it takes to grind out some of those wins he used to in his younger days.

Still, if you take GSP at his word, he was mentally fried during the last stretch of his run in the UFC. Perhaps a refreshed, newly focused GSP can come back and put another stamp on his resume proving he is without a doubt one of the greatest MMA fighters of all-time. Should a match occur between Bisping for the title, it’s hard not to argue on his behalf if he’s held two titles in two different weight classes.

Either way, if GSP officially comes back, Canada will have GSP and Brock Lesnar fighting on their behalf. Screw the Avengers, Canada is putting together its own elite fighting unit right before your very eyes.