George Stroumboulopoulos. Yes, finally I am motivated to flawlessly spell that outrageous last name without cheating. Why? Because when he spoke to a full house at the UBC’s Old Auditiorium last week, he blew away the crowd with his sincerity and charisma.

Stroumboulopoulos (lets continue this with his nickname and Twitter handle: Strombo) popped onto the stage to a roaring round of applause by exuberant UBC students and faculty to deliver a conversation-style Last Lecture.  Although Strombo’s claim to fame has undoubtedly been on his late night CBC talk show George Stroumboulopoulos Tonight, a variation on what was once called The Hour, many of us still fondly remember his glory days on MuchMusic – which by the way, he says he didn’t really enjoy. When reflecting on his time there, Strombo bluntly said that he simply started too late in life to comfortably host on that station. At 27, having to tolerate the likes of bands such as Creed, drove him crazy.

Strombo was quite open about his family as he playfully described his mother’s religious commitment as having “Jesus on speed dial,” and his father’s absence throughout his life as something he accepted and was okay with. Strangely enough, despite their estranged relationship, he credits his father with influencing his love for the Montreal Canadiens, as the majority of their very limited time together involved watching Habs games. Early on in the talk, one could really sense his charisma and openness in front of complete strangers. Strombo entertained the crowd with funny moments, such as abusing his company’s green lizard costume, back in Kelowna, where he started his career in radio, alongside his epic fails in high school science and math classes. Strombo’s ability to switch gears between funny-man heroics and sincerity was amplified when seen in real life and it reflected the tremendous people skills he has collected in his journey of meeting some of the most interesting people in the world.

Perhaps the biggest surprise and equally most interesting piece of information Strombo revealed was his introverted personality. Believe it or not, but he is a self-proclaimed introvert. He says he has had to adapt to look like the extrovert we believe him to be – seemingly one of the most outgoing people in the country.

Strombo got very into why he likes radio so much more than TV – because, he says, it reveals a much more real connection with audiences where the distraction of appearances is eradicated and one can just sit by themselves next to a radio and listen until the early morning.

Strombo hammered down the point of mutual respect with how he approaches connecting with his audience. He quoted an old colleague who told him to “never talk down to your audience and “f*ck em if they don’t get it,” words he firmly stands by.

He also highlighted his people watching habit. On public transit, Strombo says he enjoys observing the body language of the people around him and determining who may be having the happiest or the saddest day of their lives.  Then, when he’s forced to look into that camera lens and address all of Canada, he thinks of those individuals who he saw on the bus. Staring into the lens he imagines looking at them, connecting with them on a level many others oversee or simply don’t bother noticing.  I have to admit, seeing him wear the custom made UBC Thunderbirds Hockey Jersey made me pretty proud to have a guy like that representing Canada and interviewing the likes of Tom Cruise, Ryan Reynolds, Matt Damon, and Ricky Gervais. 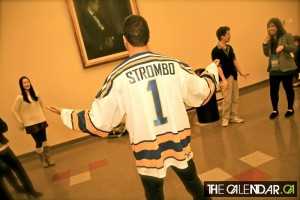 Photo via The Calendar