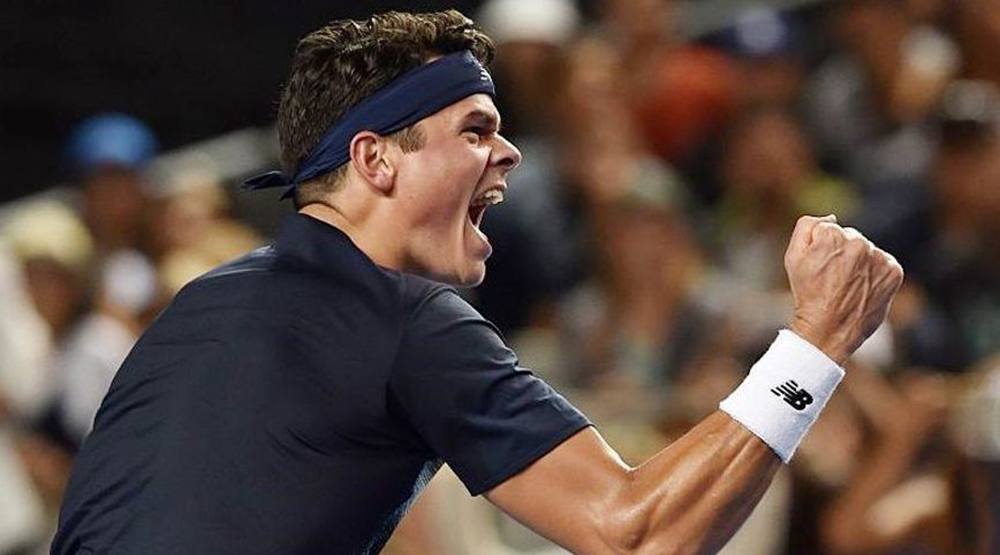 On Saturday, he won his third round Australian Open match against Gilles Simon. With second-seed Novak Djokovic out of the tournament in his half of the draw, he has an excellent chance to go all the way to the final of the 2017 tournament.

And despite Genie’s third round loss, 2017 could also be her best year yet.

Three years ago, Bouchard reached the Australian Open semi-final and Wimbledon final. She was the darling of the tennis world, and experts had her pegged to win multiple Grand Slam titles.

Since her breakthrough, Bouchard’s mixed results have been well publicized and heavily scrutinized.

Many were critical of how Bouchard went about her business, accusing her of being distracted – too caught up in the public appearances and fame that came along with being a tennis superstar.

They tore her to shreds on social media and and speculated endlessly on sports talk shows everywhere. It’s easy to find comments like this all over her Twitter and Instagram feeds.

@geniebouchard Would you be better focusing on your tennis after R1 exit? Is focus in correct area?

During the French Open last year, Bouchard opened up about how the pressure of rising to the top so quickly had affected her (from TSN):

“I felt a lot of pressure and kind of this expectation that, if you win a match it’s normal and if you lose it’s a disaster…

“Before matches I was very nervous and definitely had trouble eating. I just felt like it would come right back up. It is a difficulty I went through. And not just before matches, but [it] happened to me at other meals as well. I was just so stressed. I was burning calories even more than I normally would, so it was hard to kind of intake enough to keep my weight up or even gain weight, which was the goal, to become stronger.”

With that in mind, Bouchard spent her latest off-season in Las Vegas training with Gil Reyes – Andre Agassi’s legendary trainer who helped him get to the top of the sport.

According to Sportsnet Magazine, Reyes’ main goal was to help Bouchard “pack on pounds”.

Bouchard enjoyed the added bonus of meeting Agassi and Steffi Graf and hearing their perspectives on tennis.

In the magazine article, Bouchard spoke about how her conversations with Agassi will shift her strategy this season.

“That’s actually something we touched upon, about not having to pull the trigger too soon if you don’t need to, and playing maybe more higher percentage and not complete risk on every single shot…

“I could try to simulate that since we do kind of have similar game styles.”

While Bouchard’s second round loss at the Australian Open doesn’t prove things are changing, you could see the modifications beginning to enter her game.

New strategies can take a while to implement, but her shots were more powerful and more directed, and she looked more like the 2014 version of herself – if not a stronger one – than who she’s been the past two seasons.

Raonic’s push for the top

Unlike Bouchard, Raonic’s path has been linear. From when he was named the ATP’s Newcomer of the Year in 2011 to now, he has steadily improved.

In 2013 he cracked tennis’ top-10 ranking and he made his first Grand Slam semi-final in 2014. At the time he was still regarded as a mostly one-dimensional player – he had one of the best serves in the game and a great forehand, but his ground strokes and return game weren’t threatening the top players.

Last year, Raonic added John McEnroe and Carlos Moya to his team at different points – constantly striving to add to his game in his quest to be at the top.

2016 saw Raonic make his first Grand Slam final at Wimbledon while he climbed the rankings all the way to number-3 in the world by year end.

The ranking is fitting, because that’s exactly where he now sits. At everyone’s best, he’s just a slim margin below Murray, Wawrinka, Djokovic, and Nadal. He’s also at the top of the pile of challengers – Roger Federer, Kei Nishikori, Grigor Dimitrov, Dominic Thiem, and the rest.

Fact is, Raonic has put himself in a position where if he plays at his top level for an entire match, he has a good chance of beating anyone in the world.

And if that happens at the finals of one of this year’s Grand Slam tournaments, he’ll be writing a whole new chapter in the history of Canadian tennis.

With Genie and Milos looking set to take on the best in the world, the race is on for who will be the first to bring home Canada’s first major tennis championship. 2017 should be a memorable year for Canadian tennis.