Seycove Secondary in Deep Cove just became the first in the area to introduce a gender-neutral washroom – a decision not just a win for transgender students, but for the entire student body.

“Basically it’s honouring the students and allowing them to feel comfortable, particularly for students who are different,” says Mark James, Seycove’s principal since September 2015.

Although the school still maintains its male and female designated washrooms, the stand-alone gender neutral facility is one that anyone can use.

“It’s not attached to any individual group,” he says. As for pushback from parents, faculty or students? James says there has been “none whatsoever.” 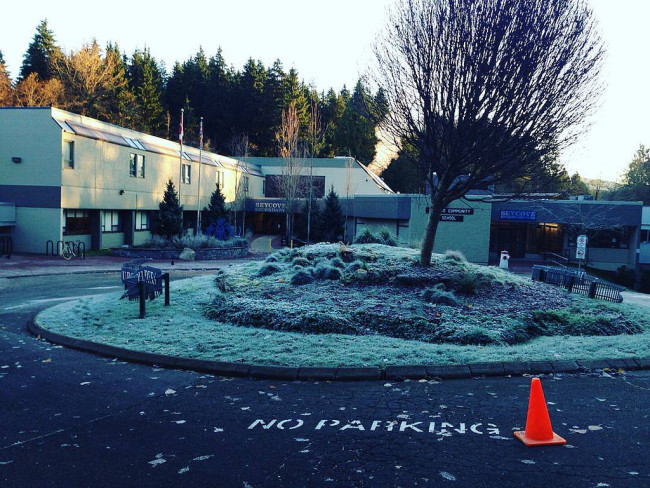 For someone who is facing an identity issue, the designated male or female stick figure on a bathroom door can instigate panic. Now at Seycove, anyone in this position knows that when they have to go to the bathroom, they can find one that suits them.

“It’s stuff like this, the day-to-day activities that can make them feel welcome and comfortable with themselves,” says Brian Wilson, president of Seycove’s Queer Straight Alliance Club.

A gender-neutral bathroom is a relief to anyone who may not associate with being male or female, or is simply non-gender conforming.

“Having an option to just go to the bathroom and not face their need to identify themselves, that will be consoling to them [because] it doesn’t label them,” says Wilson. “For transgenders, they would feel the school is doing their part [to ensure] a safer environment, and as a straight student, I would feel the school is doing what it can to be inclusive. It’s a statement saying regardless of who you are or how you identify, this high school is making its efforts.”

The process of establishing a gender-neutral washroom started two years ago after Wilson and his club attended the Dare to Stand Out Conference at Gladstone Secondary in Vancouver.

“There was an outcry for gender neutral washrooms; tons of people told their stories about why it was important to have the space,” Wilson says.

After speaking with the administration at Seycove, who were comfortable with the idea, the club was able to secure a plan for the washroom.

Former Seycove student, Alexandra Okrainetz says she believes the enthusiasm that comes with an active student body has helped changes like this to happen.

“I think talking about these sort of issues is important, but taking action makes a statement and Seycove is taking action in a big way,” says Okrainetz. “I imagine that for the grade 8s attending Seycove in coming years the existence of gender neutral bathrooms will be the norm, and that is so exciting.”

In 2013, Vancouver City Council accepted gender-neutral bathrooms in public buildings, making it the first municipality in Canada to acknowledge the necessity of such a facility. In 2014, the Vancouver School Board passed a motion for genderless bathrooms in its schools. Now, in 2015, that goal was accomplished at Seycove Secondary, and will perhaps enact change in other schools across the province.

Yet, it goes beyond “just” making a bathroom for transgender and gender-variant students; it’s about creating a space that is accommodating for everyone. At Seycove, students and staff decided that it was important these conversations no longer take place behind closed doors, and they did that by creating some.