Most critics argue Mike Gillis’s creation of the best Canucks team ever was not rocket science. He took an existing core of players, added key pieces, and watched as it ascended the standings. Simple stuff.

What people didn’t see is all the engineering that went on beneath the surface. Maybe it wasn’t “rocket science” but Vancouver’s “hockey science” pushed the team to higher heights.

In this article, we delve into the behind the scenes activities undertaken by Gillis’s management group.

Upon being introduced as GM in 2008, Gillis said he hoped to bring a “different perspective” to running an NHL team. In 2011, Gillis told Bruce Dowbiggin, author of Ice Storm: The Rise and Fall of the Greatest Vancouver Canucks Team Ever, his approach on managing the Canucks. “I built a game plan and I decided there was no detail too small to worry about, because it might give us an edge.”

Gillis appeared on the Team 1040 (now TSN 1040) in 2012 and discussed his research on the performance of athletes (transcribed by CanucksArmy.com).

“I’ve been working on a human performance plan… I think fatigue was the first stage in it, about how you deal with the ups and downs. One of the things I’ve concluded is that compounded with the types of games that we play and the pressure – we have to find a better way to deal with that, and we have to find it quickly.”

According to Dowbiggin, the Canucks sleep at home 50 percent of the time during the season, while a northeastern team sleeps on the road only a “few dozen” times. Flying between NHL cities, as Vancouver does for all road trips, takes a much greater toll on the body than the bus and train rides eastern teams endure.

Gillis hired a company called Fatigue Science to study Canucks players’ sleep patterns. During the 2011 run to the Finals, NHL writer Dan Rosen wrote an article chronicling the company’s work with the team.

The Vancouver-based company had players wear wristbands while they slept, measuring time spent in a deep sleep versus a light sleep. From Rosen’s article:

Fatigue Science then runs the data through its software to advise the Canucks on the best approach to travel, practice, eating habits and even determining who should room with who in the hotel.

Alain Vigneault, then head coach of the team, spoke about the sleep research in Rosen’s article:

“Because we travel the most in the NHL, that’s one of the reasons why we try to get a scientific approach to where our guys would have the utmost energy.”

“I do think that, combined with both Roger (Takahashi) and Glenn (Carnegie) monitoring our conditioning the way they do, it certainly seems to be beneficial.”

Rosen cited Vancouver’s road record (27-10-4) and their third period dominance (100 goals for vs. 58 against) as signs they had conquered exhaustion with help from Fatigue Science.

A new “office” for the players 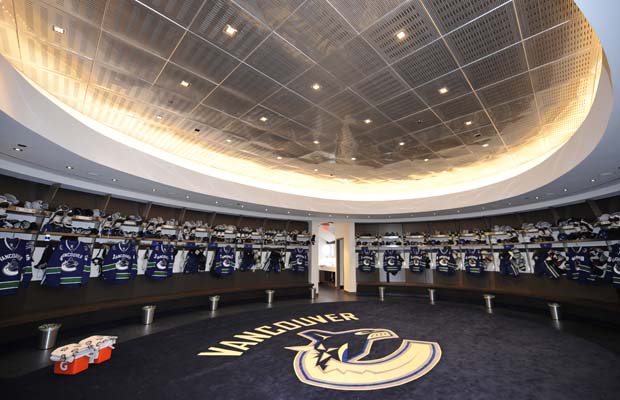 In 2009, the Canucks hired Gateway Architecture to design a new dressing room facility – one that could serve as a home base for the players.

The dressing room itself was an oval, instead of the standard rectangular shape. According to Dowbiggin, the goal was to create sightlines between each player.

The rest of the facility included a kitchen, players’ lounge where they could get away from media, wi-fi area, and a new whirlpool. Yes, hot-tubbing makes you play better hockey.

In an article for Canucks.com, Harvey Jones, Canucks manager of arena operations said the new area received league-wide attention as soon as other teams saw it.

“We had a call from a guy in Ottawa saying ‘what the heck did you do, my boss just came in here and said to find out what the guys in Vancouver did because all the players are talking about wonderful things you’re doing for the players and the new dressing room.’ Word is getting out all over.”

The kitchen came with team chef, David Speight, who worked with each player, preparing meals, and even conducting cooking classes to help them prepare their own healthy meals.

One of Gillis’s most often joked about innovations was the “Mind Room” – a top-secret space reserved for the study of stress and its effects on the players.

The Mind Room (using instruments from Thought Technology) uses biofeedback and neurofeedback instruments to assess and train athletes to control their stress and attention in competitive situations.

Biofeedback uses physiological measures of muscle tension (EMG), skin perspiration (GSR), temperature , respiration and heart rate variability. Neurofeedback, or EEG biofeedback assesses unhealthy brainwave (EEG) patterns to determine if an athlete is anxious, in the peak attention zone or over-focused and trains their brain to be able to maintain the optimal pattern required for peak performance.

Gillis, who himself had read studies on how stress affected performance, told Dowbiggin:

“The worst thing you can do on a game day is show an athlete images of his opponent succeeding.” – it increases stress. “On the other hand, positive coaching results in adrenaline being produced.

“So on a game day or at intermission, we’ll try to stress the positive aspects of a situation we faced in a game. If we’re behind, we’ll show how our team has come from behind in the past. If an opposing goalie is playing well, we’ll find video showing us scoring on him in the past.”

In 2011, Gillis and team owner Francesco Aquilini went as far as convincing Bruno Demichelis of Chelsea Football Club to come work for the Canucks. A past employee of AC Milan, Demichelis had created a sports science centre called MilanLab, with the aim of optimizing “physio-physical” management of athletes.

The Demichelis plan never got off the ground, though, as he was unable to obtain a Canadian work permit, according to Dowbiggin’s book. Other reports say this is not the true story of why it was cancelled. 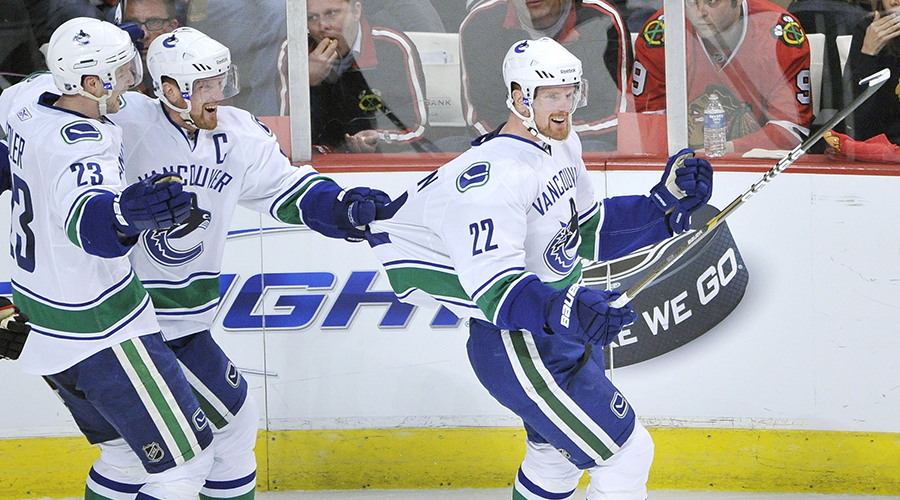 Like with any sports team, much of the product seen on playing field, or ice in this instance, was a result of a carefully crafted game plan. One way the Canucks’ plan differed in contrast to those of other teams was through the way its players were deployed.

Cam Charron, then a writer on the Province Blog (now a member of the Toronto Maple Leafs’ famous analytics team), noticed and wrote about this. He noted that Vancouver’s most offensive players, particularly the Sedins, were given a majority of faceoffs in the offensive end, while its more defensive lines took draws at the other end.

Simply put, Vancouver does this more evidently than any other team in the National Hockey League. The fact that it’s been unnoticed by so many media members and fans in Vancouver is getting to be not even funny anymore. It was a crazy swing last year and getting more evident this season. 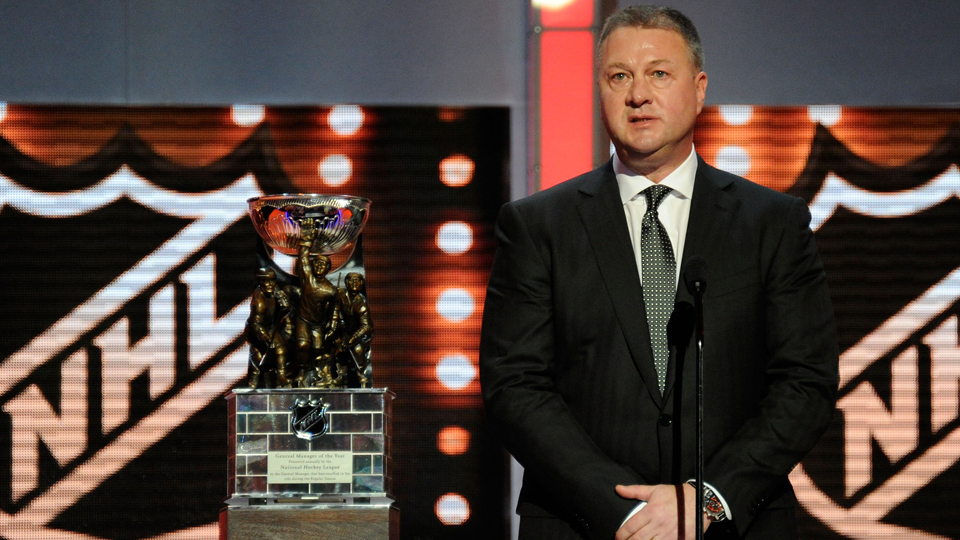 In 2012, Charron wrote in-depth (and in nerd-speak) about the Canucks improved performance under Mike Gillis:

But where did the increase come from? They actually lost ground in the second period, their win expectancy dipping by 8% in the middle frame in the Gillis era, but that’s propped up by a 23% gain in the first period and a 35% increase in the third period.

The Canucks were an incredible third period team during those years of dominance, and they did it on the backs of two players over the age of 30 (the Sedins).

That Gillis left no stone unturned cannot be argued – he even went as far as collaborating with UCLA to create a sports drink that responded to the specifics of playing in a sea-level environment and heavy travel, according to Dowbiggin’s book.

We don’t know if Gillis’s scientific approach helped the team, but we do know the Canucks won two straight Presidents’ Trophies and made it to Game 7 of the Stanley Cup Finals. And we know he did everything he could think of doing behind the scenes.