Looking back, it’s so blatantly obvious. When Roberto Luongo uttered the words, “It’s been a great six years, but it’s time to move on,” Mike Gillis should have listened.

The Canucks should have traded Luongo that summer.

It was the the summer of 2012. Cory Schneider had been called upon to start Games 3, 4 and 5 of the first round series against the LA Kings after Luongo started and lost the first two. Schneider won only one, and the Canucks followed up their 2011 Finals run with a first round exit.

A few weeks later, Gillis signed Schneider to a 3-year $12 million contract – a signing that signaled the direction Vancouver wished to pursue in net. The page had been turned on Luongo’s time with the Canucks.

At least it should have been.

What ensued was two years of Luongo being the most discussed name in the NHL, climaxing with the Cory Schneider trade at the 2013 NHL Entry Draft, and culminating with the Luongo trade in March 2014.

Canucks fans were incensed by the two trades. Many still are.

Vancouver, once blessed with two of the NHL’s best goaltenders, sat through two long years of trade rumours, for what? To end up with Bo Horvat (aquired for Schneider), Shawn Matthias and Jakob Markstrom (aquired for Luongo), and neither elite goalie.

If you go back and examine the decisions Gillis made on the goaltending front, however, Gillis had little choice – not because of Luongo’s contract, but by how the situation unfolded. 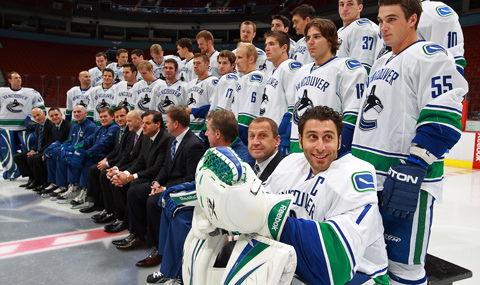 Pegged by some as an albatross, Luongo himself said his deal “sucks”, and that it was the anchor that held back a potential trade. The truth is Luongo’s contract was brilliant when it was signed.

Jay Adams broke it down in detail in Part 5 of this series. To summarize: Luongo’s 12-year deal allowed him to be one of the highest paid goaltenders in the NHL (deservedly so), while lowering the cap hit for the Canucks so they could build a team in front of him.

The other peice of genius was contract’s “tail”: as soon as Luongo retired, the cap-hit would disappear from the NHL’s books.

Gillis’ first opportunity to fix goaltending log jam came mere months after that first round loss to the Kings at the 2012 NHL Entry Draft. Everyone knew Luongo’s first choice for a trade destination was Florida, but it was the Maple Leafs who put together a serious bid.

Toronto, many believe, offered Tyler Bozak, Nazem Kadri, and a draft pick for Luongo at the time. A few months later, Damien Cox reported that Vancouver “got greedy” and turned down the deal, but it would later come out that Luongo was the one who used his veto power.

Luongo’s thinking – hold out for Florida. Toronto’s offer will still be there at the trade deadline in April.

With hindsight on their side, pundits look back and say the Luongo trade should’ve been consummated at that draft, but the deal was impossible to complete once Luongo used his no-trade clause to nix the best deal on the table. 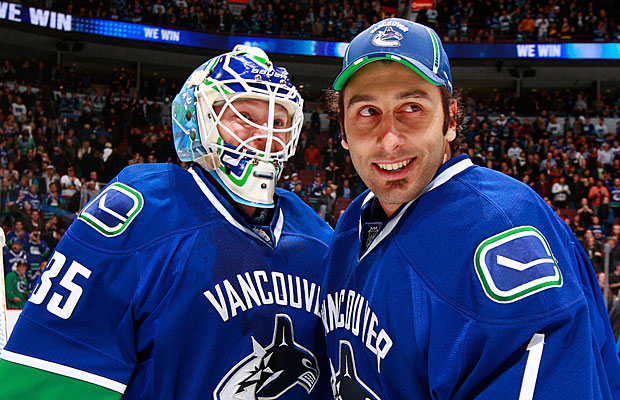 Still, being patient on the trade made sense at the time. Luongo was regarded as one of the best netminders in the world – one who could turn a team missing the playoffs into one that could make them and win a round or two.

He had already proven that in Vancouver.

Should any of the teams on Luongo’s list have a bad start to the season, you’d expect them to get desperate and put together an even better package than they offered at the draft.

It might have gone that way had the NHL been operating as usual, but it wasn’t. The league locked out its players, closing its doors for three months, meaning three months of wasted time on the Luongo trade front for Mike Gillis.

When reflecting on how long it took Gillis to trade Luongo, it’s rarely mentioned or remembered that half a season and all the pressure it would’ve put on Luongo’s suitors was lost with the lockout.

Rumours swirled throughout the 2012-13 NHL lockout and as soon as the season began many reported that a potential deal was in place for Luongo.

So this is a thing… #luongo pic.twitter.com/bSO62V2D

This may or may not have been true, but what we do know is the new CBA punished teams that had signed “back-diving” long term deals that lowered the overall cap hit. Unlike before, where a Luongo retirement would mean the contract (and cap hit) would effectively vanish, if he retired under the new rules, his team would have to pay a cap advantage recapture penalty.

Once the season began in late January, Toronto received solid goaltending from James Reimer – he was 13-4-4 with a save percentage of .920 going into the trade deadline – dousing their urgency.

At the 2013 deadline, the Leafs significantly dialed back their proposal from the previous summer, reportedly offering one draft pick and backup goalie Ben Scrivens, while asking Vancouver to eat some of the contract.

Considering Vancouver believed themselves to be a Stanley Cup contender, trading Luongo for a worse backup and mediocre future returns made less sense than showing confidence in their core and keeping two strong goalies for another playoff run. (PITB’s Daniel Wagner made a strong argument about this.)

At the 2013 draft, something had to give. Offers for Luongo had gone downhill since the new CBA was signed – his contract, a brilliant piece of work when it was signed, was now a noose.

After promising Schneider and Luongo the situation would change for a full year, keeping both starting goalies was not an option.

But what happened after 12 months of listening to Luongo trade rumours came straight out of left field.

“I think you’re going to want to hear this… New Jersey trades the 9th selection in the 2013 NHL Draft to Vancouver in exchange for goaltender Cory Schneider.”

Vancouver chose to stick with Luongo and deal Schneider for the ninth pick that turned into Horvat. All of this was done without Luongo being notified, we soon found out. While Gillis was in New Jersey dealing Schneider to the home team, Canucks owner Francesco Aquilini was visiting Luongo at his house in Florida – pleading him to let bygones be bygones and telling the goalie how much he meant to the team.

The truth was clear – faced with the option of respecting Luongo’s wish to set him free by buying out his contract, Canucks ownership couldn’t stomach the bill (2/3rds the amount remaining on the contract plus a cap hit). Instead, they dealt the goalie they’d thought would be their future, sticking with the one they’d rather have traded. 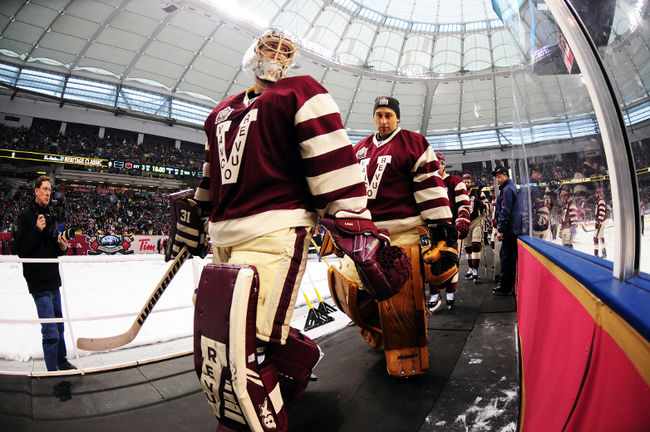 In the season following the Schneider trade, Luongo came back to reclaim his starting role once again. His request to be traded remained on Gillis’ table.

When the season started, he was unwilling to talk about his future in Vancouver.

Luongo appeared on Hockey Night in Canada’s After Hours on Nov. 23, 2013, and he explained why he said “my contract sucks” at the trade deadline a year before.

“I meant what I said at the time. I didn’t say it out of anger or frustration. That’s just the way I felt.”

“The duration kind of cornered me into the situation right now.”

Luongo expressed relief, but opened up on how he felt sharing the net with Schneider.

“The main thing is I get to be a starter again.”

“The last year and a half was pretty tough for me. Even though I put on a good face, inside it was eating me up not being on the ice. That’s what made it easy to come back – to be able to play and be a starter again.”

Just before the February Olympic break, Luongo began to sound like he was enjoying his role with the Canucks and might decide to stay.

On January 30, interviewed by the Team 1040’s Matt Sekeres and Blake Price, he was asked if he’d be requesting a trade again in the summer, and he said he’d things were going well for him so he didn’t want to think about that.

That was before the Heritage Classic of course, when all that happiness and momentum was halted. In the game Luongo had been looking forward to playing all season long, head coach John Tortorella chose to give Eddie Lack a third straight start, saying Lack gave the team the best chance to win.

With the decision, the goaltending controversy many thought had been exorcised from Vancouver forever was brought back to life and Luongo wanted none of it.

We all know what happened next, as Luongo turned up the heat on his trade demand from almost two years earlier and Gillis traded his second superstar goalie in nine months. 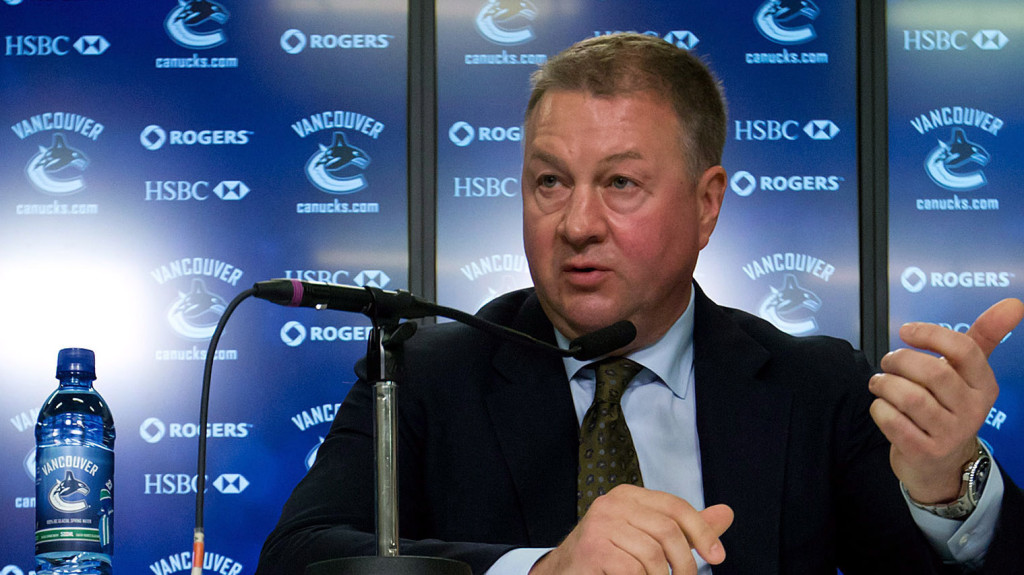 Had Luongo not vetoed the trade to Toronto in the summer of 2012, the Canucks would have likely received Tyler Bozak, Nazem Kadri, and a first round draft pick. Gillis would have had Schneider as his starter while adding depth at centre and in the pipeline.

That road block, erected by Luongo himself, pushed his trade into the new CBA – a new dimension in which his contract “sucked”.

So much did the contract suck under the new CBA that it caused an entire year of unnecessary heartache and uncertainty for both Luongo and Canucks fans.

The person it may have sucked most for, though, is Mike Gillis. At the end of his tenure as GM of the Canucks, the way Gillis dealt with the Luongo-Schneider situation is seen as his most glaring transgression.

So glaring it may have cost him his job.