It’s wrong that Mike Gillis gets ridiculed in this city.I know that’s not a popular view, but it angers me that the most successful general manager in Vancouver Canucks history would get booed mercilessly if he showed his face at Rogers Arena.

In six seasons under Mike Gillis, the Canucks won their division four times, won two Presidents’ Trophies and came within a whisker of winning the first Stanley Cup in franchise history. Did he build the team from scratch? Of course not, nobody does, but he played a large part in the rise and the fall of the Vancouver Canucks. Today, I would like to focus on the rise.

The Canucks had the best team in the NHL in 2010-11, plain and simple. They proved it by being the clear class of the regular season, winning the Presidents’ Trophy by a whopping 10 points. They had six more regulation/overtime wins than any other team. They had the best power play and the third best penalty killing. They scored the most goals and gave up the fewest. This was not a run-of-the-mill regular season.

And contrary to popular belief, they didn’t do it by simply beating up on the other four members of the Northwest Division. Certainly playing in a weak division helped, but only moderately. They played the Edmonton Oilers on six occasions. The San Jose Sharks played Edmonton four times. And the Canucks actually lost to them twice near the end of the regular season 4-1 and 2-0 after they had the Presidents Trophy clinched.

Had they not run into a string of injuries and bad luck, they would have won the Stanley Cup too.

The 2010-11 team is lamented for not having an effective 4th line. After the trade deadline passed in 2011 (ie. the last chance Mike Gillis could tinker with his team), the Canucks had a 4th line that consisted of Max Lapierre, Chris Higgins and Tanner Glass. Not bad.

So how did the Canucks go from being out of the playoffs in Dave Nonis’ final year to best team in the league? Great contracts.

The Canucks were full of them in 2010-11 and the vast majority of them were signed by Michael D. Gillis.

Here are the notable ones signed by Gillis that were in effect in 2010-11:

In the spring of 2011 these were all excellent contracts to have. Daniel and Henrik Sedin were two of the best offensive players in the league and their cap hits ranked #38 and 39 in the league. That was less than the likes of Jason Spezza, Paul Stastny and Ryan Smyth.

In 2011, under the terms of the old collective bargaining agreement, Roberto Luongo’s contract did not suck. In fact, it was excellent. Luongo’s cap circumventing deal had a cap hit of just $5.333 M, which ranked him 9th among goalies (less than Tomas Vokoun and Cristobal Huet!). Before that contract was signed, Luongo had the 2nd highest cap hit among goalies and was one of the best netminders in the league. Luongo’s contract became unmovable after the unprecedented move by Gary Bettman to change the rules of cap circumventing contracts after the 2013-14 lockout. It was a move that no general manager could have predicted when the contract was signed. 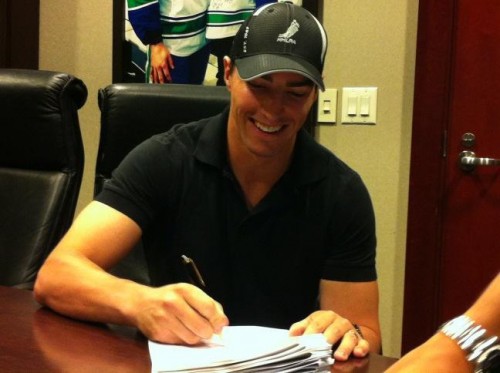 His crown jewel was the 4-year $2 M per season contract signed by Alex Burrows. Burrows, who was in the midst of a breakout 28 goal season when he signed the deal, was the best value-for-money in the NHL. Burrows scored 28, 35, 26 and 28 goals during those years.

According to one source, #Isles offered more money to Dan Hamhuis than what he ended up signing for as well….

In some cases, Gillis was able to get players to sign in Vancouver for less money than they were offered elsewhere. This was the case, in part, because the Canucks became destination franchise.

That team also benefited from Sami Salo and Kevin Bieksa’s contracts, leftover from the Dave Nonis era, but otherwise it was essentially a team signed/re-signed/acquired by Mike Gillis.

Critics of Gillis would say that he used his cap savings on bust players like Keith Ballard and David Booth, and they would be right. Gillis struggled in the trade department, but that didn’t fester much until after 2011. Until then, the Keith Ballard trade was really his only major misstep.

In the contract signing department, Gillis was the best in the league. He did make some mistakes, but they were usually on short-term deals. Mats Sundin ($8.6 M pro-rated), who was an effective player in the playoffs in Vancouver, was signed for just half a season. Pavol Demitra ($4 M) was under contract for two seasons and put up 53 points in his first in Vancouver. Mathieu Schneider ($2.75 M) was a horrendous deal, but he was under contract for just one season and jettisoned quickly.

Some of the shine wore off Gillis’ contract signing prowess after 2011, but he was still rather good. Jason Garrison’s 6-year contract worth $4.6 M draws a lot of ire, but it was at least still tradeable.

Gillis never signed a debilitating contract like Colby Armstrong (3 years, $3 M), Mike Komisarek (5 years, $4.5 M) or David Clarkson (7 years, $5.25 M). He may have traded for one or two of them (David Booth and Keith Ballard), but when he was in the negotiating room, there was no one better.

The Canucks went downhill after 2011, although that did include a second Presidents’ Trophy, I might add. And we are seeing this year that the team that Gillis left for Trevor Linden and company wasn’t as bad as some may have thought. The people lamenting Gillis for re-signing the Sedins ($7 M), Edler ($5 M), Burrows ($4.5 M), Higgins ($2.5 M) and Hansen ($2.5 M) aren’t as loud as they were six months ago.

The late Pat Quinn is viewed as a hero in this city and for good reason. I have written about all the great things he did for the Vancouver Canucks. But when he was fired in 1997, the Canucks were a team that had missed the playoffs the previous year and were in disarray. The team did not have a legitimate starting goaltender and did not have a legitimate first line centre. He didn’t have a particularly great drafting record and he angered Pavel Bure enough to make him want to leave town. He let Cliff Ronning and Geoff Courtnall walk for nothing in free agency and he held onto players like Jyrki Lumme, Dana Murzyn and Dave Babych for too long.

That’s obviously a cynical way to look at Pat Quinn’s tenure in Vancouver, but that’s also the way Mike Gillis is unfairly viewed. He was far from perfect but he did some good things and he helped produce some of the best hockey this city has ever seen.