Canucks fans didn’t know what to expect when the Canucks hired Mike Gillis as a rookie GM in the summer of 2008.

After he proclaimed, “I don’t think this team is close [to contending] at this particular point,” at his introductory press conference, fans felt more nervousness than optimism due to his brash confidence.

Clearly Gillis was going to be honest in his assessment and aggressive with his moves.

Character and integrity – these were the key attributes for any player who was going to play for his revamped team. He repeated the words every chance he got in those first few years. Gillis also emphasized he was going to make Vancouver a highly desired home for all NHL players.

“I’m hoping to be able to attract players here because, in dealing with them for the last 17 years, I understand the message they want to hear and what is important to them, ” he said.

“We have a solid defence and solid goaltending. But there are a number of areas that need to be addressed.”

Looking at that list, the glaring omission was the forwards.

Before throwing the famous two-year $20 million offer at Mats Sundin during the summer of 2008, Gillis jettisoned Markus Naslund and Brendan Morrison and shored up his forward depth with Ryan Johnson, Kyle Wellwood, Steve Bernier and Darcy Hordichuk.

He also signed Pavol Demitra to a two-year $8 million deal.

Making sense of the $20M offer 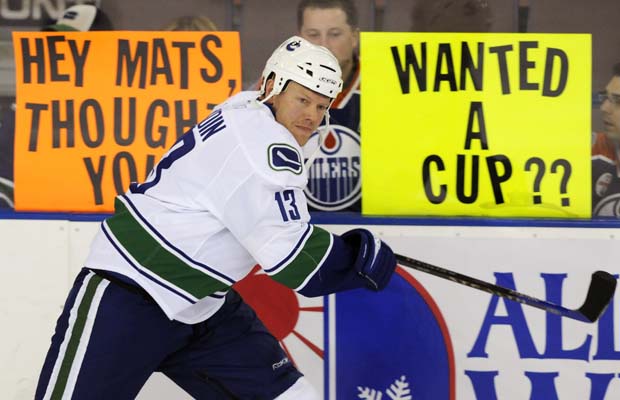 Sundin was coming off a 78 point season with the Maple Leafs and he had put up 1,321 points in his 1,305 game NHL career so far. The offer was meant to be a signal to fans of the team and to the rest of the NHL that Francesco Aquilini’s Canucks, with Gillis at the helm, were not to be taken lightly.

As the Sundin saga played out over the first few months of the 2008 season, there were a number of teams in the sweepstakes. Throughout it, Gillis displayed an extreme amount of patience and faith in the player he was chasing.

“I’ve represented players who have been in similar situations and I understand and appreciate it.” (from TSN.ca)

When Sundin made the decision Canucks fans had been hanging on for 5 months, there was a strange feeling of excited disbelief in the air. Could Gillis’ vision for a program of excellence – one that attracted the league’s best talent – become a reality?

Sundin had chosen Vancouver over teams that were stronger Cup contenders – places that were historically more alluring NHL destinations.

“I think we’ll see a big, strong centre-ice man who skates really well and averages a point a game,” Gillis said of Sundin. “He has been the captain of a team in a [Toronto] market that is really challenging and he has handled it impeccably.”

“I think the quality we try and get from every player, in terms of character and integrity, are absolutely there.”

Sundin began his time as a Canuck slowly once he finally began playing in 2009, but by February he was making waves around the league.

“Sundin finding groove with Demitra, Kesler – Canucks’ new 2nd line arrives in St. Louis with 15 points in 2 games” – this was the headline of an article on CBC.ca article published Feb. 10, 2009, following a 7-3 win over the Blackhawks.

That pace didn’t last – by the end of it Sundin managed 28 points in 41 regular season games with the Canucks. In the playoffs, he did better putting up 8 points through 8 playoff games. While the point totals weren’t up to the standards he set in Toronto, Sundin brought some intangibles to Gillis’ freshman year.

The year after Sundin left, Henrik and Daniel Sedin’s scoring output took a massive jump. Henrik won the Art Ross and Hart Trophies in 2010 (112 points) and Daniel followed up with his own Art Ross in 2011 (104 points).

Asked about what changed for them by The Vancouver Sun‘s Iain MacIntyre, Daniel gave credit to Sundin:

“We have a different attitude toward the game…”

“Looking at Mats, he had a tough start. It didn’t bother him. He just came to the rink and did the same things over and over again. He knew it was going to pay off. He still kept his head high and by the playoffs he was awesome.”

“We’ve always put a lot of pressure on ourselves. You learn to deal with that. But Mats put us over the top to see how he handled things.”

“To see Mats out there, struggling, getting criticized, but still keeping his shifts short – he never played for himself. I think that’s been a key for us.”

And on an appearance on CBC’s After Hours in 2010, Ryan Kesler credited Sundin with improving him as a pro, getting him to show up every single game and bringing his game to the next level. Kesler’s point total jumped from 59 to 75 that year.

It’s hard to quantify what effect Sundin’s signing had on legitimizing Vancouver as a destination (did key players Mikael Samuelsson, Dan Hamhuis and Manny Malhotra sign with the Canucks the following summer because of the Mats Sundin effect?).

Still, if Sundin had half the impact the Sedins and Kesler say he had on their careers, that $8.6M pro-rated contract has to be money well spent.

The big Swede set an example of excellence that Canucks players marveled at and learned from. And perhaps more importantly, Sundin’s signing was proof to Canucks fans that Mike Gillis was dead serious about winning.