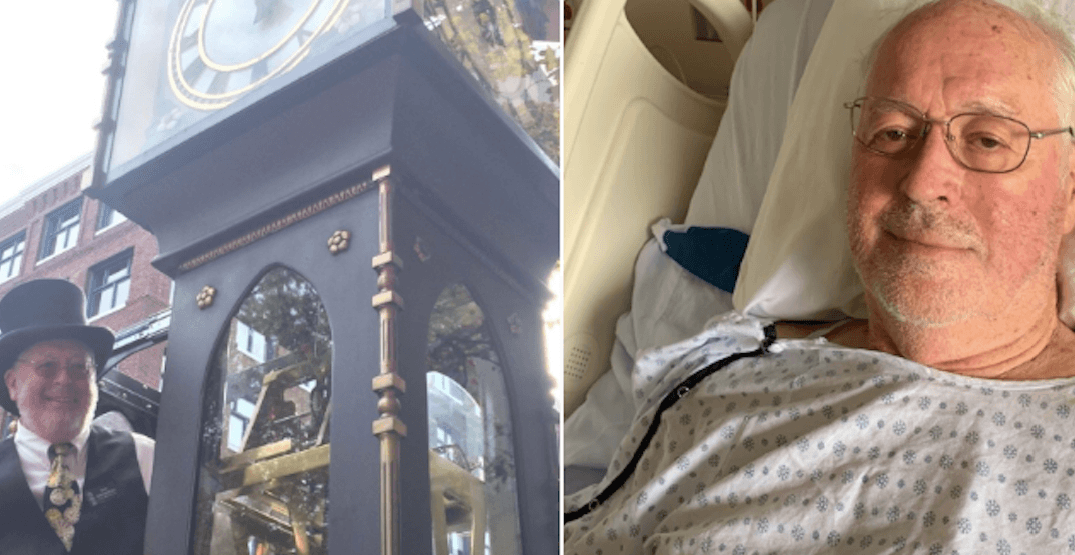 You may not know him personally, but if you’ve ever spent any time in Gastown, you’ve likely seen his best-known work.

Known by those closest to him as “Father Time,” friends and of the 79-year-old are now reaching out to the public for help, after a recent incident left Saunders injured and in hospital.

On Thursday, September 12th, while working on a clock in Trenant Park Square in Delta, BC, Ray fell off a 15-ft. ladder and was critically injured.

He is currently being treated at Vancouver General Hospital for a fractured pelvis, a broken vertebra (L1), three cracked ribs, a nicked spleen and iliac artery, and a badly dislocated and fractured left shoulder.  He also a cranial contusion requiring 10 stitches, his elbow has five stitches, and he required three units of blood while in emergency.

Saunders has undergone three separate surgical procedures as a result of the fall: One immediate vascular surgery to repair the bleed in his iliac artery and spleen, one to start the repair of his shoulder, and finally, an eight-hour surgery to plate, pin and stabilize his pelvis and spine.

He spent five days on the trauma ward of VGH, and only close family members had visiting permission.

According to those closest to him, Saunders’ recovery from this incident is expected to take six months to a year – if no complications develop. Meanwhile, his friends say his monthly expenses are currently in the range of $4,000 per month, which includes rent for his apartment, workshop and storage, food, necessities, medicine and utilities, insurance and car payments.

Now, a GoFundMe page has been launched with the goal of raising $100,000, in the hopes that Ray’s expenses will be covered for the year, and for the adaptations to his apartment to be made, according to campaign organizer Sara McAfee.

“Because of his major accident he will not be able to fulfill his contracts and will have to hire people to do this work for him,” she writes. “He has built over 250 clocks in his career, with a total of seven Steam Clocks: several in the Lower Mainland, as well as one in Australia, one in Indianapolis and two in Japan.”

She describes Saunders as a “kind and generous man,” who has also “been a selfless provider to many needy people in his life, from the artists and street people who live in the Gastown area, to friends and family.”

Saunders, said McAfee, “continues to be charitable – to a fault – to many people in his life, with now a detrimental financial effect to his own.”

He “never put money away for retirement, instead he continued working and ultimately pushing himself to do public projects to maintain a living,” she furthered. “We would like to give him the gift of a worry-free retirement, one where he does not feel compelled to get up on ladders to make a living and pay his bills.”

According to his children, Saunders has “always been a giver, first and foremost, from his charity work to leaving a lasting legacy, at personal cost, to the world through his creations and clocks.”

Their dad, they added, “has been a selfless ambassador of this city for decades.”

Income, they said, “was never a concern as he always had things in the pipeline to cover his cost of living and his generous giving. Now he needs some help as much as he will hate to admit it.”