Three days after a dubious icing call helped Vancouver ice Detroit’s 23 game home winning streak, the Canucks suffered a similar fate after a late Mike Ribeiro deflection tied the game in the third period leading to overtime, where the Stars completed the comeback, winning the game 3-2.

Loui Eriksson scored the game winner with 1:08 remaining in the extra frame, while Michael Ryder got the Stars on the board with a power play goal late in the 2nd period.

Ribeiro’s goal came off a faceoff with 52.5 seconds left in the game after the Canucks had iced the puck on the previous play. The call was seen as contentious as Stars defenseman Stephane Robidas took a less than direct route to the puck to get the icing call.

Ryan Kesler and Mason Raymond tallied for the Canucks who fall to 3-1-1 on their six game road trip and suffered just their second loss in eight games. Chris Higgins added two assists.

Both Canuck goals came during the second period off the left wing on shots that were mishandled by Stars goalie Kari Lehtonen. Lehtonen failed to properly catch Kesler’s wrist shot while Raymond’s bad angled effort from the bottom of the circle snuck through Lehtonen’s arm.

Lehtonen finished the game with 24 saves on 26 shots while Roberto Luongo had 25 saves on 28 shots.

The Canucks are now in Phoenix to wrap up their six game road trip against the Coyotes on Tuesday.

Thoughts on the Game

– Canucks started the game decently well, but as the game wore on you could tell the road trip was starting to take its toll on the Canucks. Six games in nine days is obviously tough and it would’ve been nice to see them hold on for the win, but honestly to get any points during this time of the year is a big plus.

– With the trade deadline looming, a lot of Canucks fans’ eyes were on Steve Ott as rumors continue to swirl around his availability. If there was any doubt as to what he brings to the game, he vindicated a lot of people’s belief that he is a guy the Canucks should acquire. He played a physical game, won key faceoffs, including the one leading to Ribeiro’s game-tying goal, and assisted on Eriksson’s winning goal. Judging by his performance today, if the Canucks were at all in the running for his services, the price likely went up.

– If you were watching the game you likely noticed Alain Vigneault cracking up, barely able to contain his laughter.

Viewers were left mystified as to the source of the laughs until after the game where we found out that Stars forward Vernon Fiddler had made a particularly bad impression of Kevin Bieksa being mad. 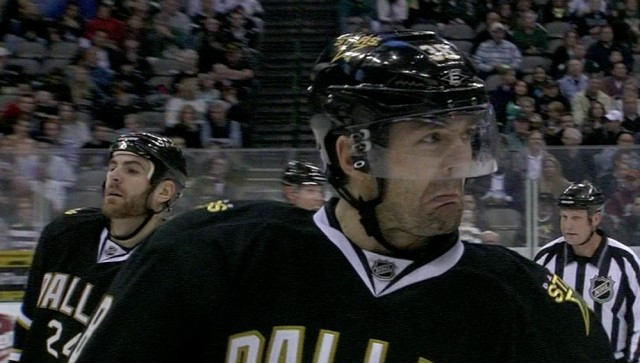 – VanCity Buzz will be providing analysis on the Trade Deadline on Twitter. You can follow us @Xchecked