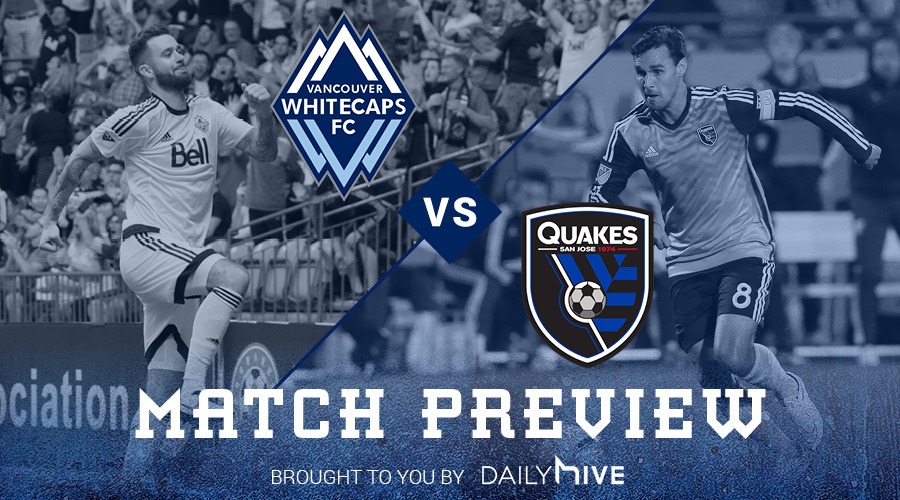 The Vancouver Whitecaps return to BC Place to welcome the San Jose Earthquakes after a four-game road trip that saw them earn a record of 1 win, 1 draw, and 2 losses.

This will be the first battle between the Earthquake and Whitecaps this season. San Jose find themselves in eighth spot in the Western Conference, just behind the Blue and White. The Californians, however, have two games in hand on the Whitecaps so this is one of those clichéd ‘six pointer’ games.

The Earthquakes have won just two of their last 12 matches and are currently riding a streak of three draws so Dom Kinnear and his boys will be eager to return to winning ways.

Winning at BC Place, however, will be a struggle for the Quakes. Since the Whitecaps joined MLS, San Jose has played in British Columbia a total of 7 times. In that span, the Earthquakes have lost six times for only one away win. So there’s that.

It was against the Earthquakes where one my favourite Whitecaps moment transpired.

The Chilean maestro’s struggles to make a mark and effectively apply his educated trade from that position are well documented. Earlier in the year, Morales displayed his best football since joining the ‘Caps playing next to Laba in a deeper role where he is able to get more touches and be more involved in the run of play.

As the Whitecaps found it difficult to transition forward, the Chilean started to drift down the pitch looking to begin to thread Vancouver’s attack. As such, Jacobson had to adjust his positioning to fill in the gaps as Morales roamed free in the midfield.

Here is the problem. If Morales is sent out as an advanced playmaker or as a winger, his impact on the game is severely diminished. On the other hand, if he is lined up as a deep playmaker next to Matías Laba, his contributions to the game improve but such adjustment places more pressure on Laba and the defensive line due to Morales’s reduced defensive prowess.

So, what to do with Morales? There seems to be no easy answer. I am of the opinion that this team plays their best football when Morales is more involved so I would continue to deploy him next to the Argentinian, despite the pressures imposed defensively.

The Whitecaps have won 2 of their last 11 games in the regular MLS season. They are now outside of playoff territory. 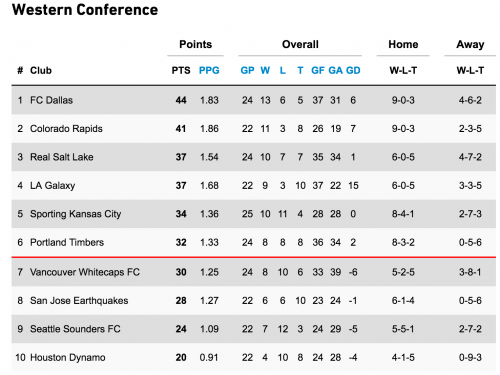 Vancouver is gearing towards the final third of the regular season. Over the next 10 games the Whitecaps will play host five times while playing five more times on the road. The Blue and White’s schedule is not cooperating in making things easy for this team to clinch a playoff berth. They have important matchups coming up against Seattle, Portland, the LA Galaxy, and New York Red Bulls.

There are two ways of looking at this. You can put on the rosy glasses and say that the Whitecaps are only two points out of playoff contention or you can argue that the Whitecaps need to reap roughly 18 points from their last ten games. Such a feat seems complicated given the form that this team has exhibited over the last few weeks.

If you wish to see the glass half full, it can be a positive that this team will have to earn their way to playoffs. A good run of form can be the difference between lifting MLS Cup in December or limping out of the playoffs like the Carl Robinson and his team did last year. However, if they want to achieve their goal, they need to start winning and they need to start winning now.