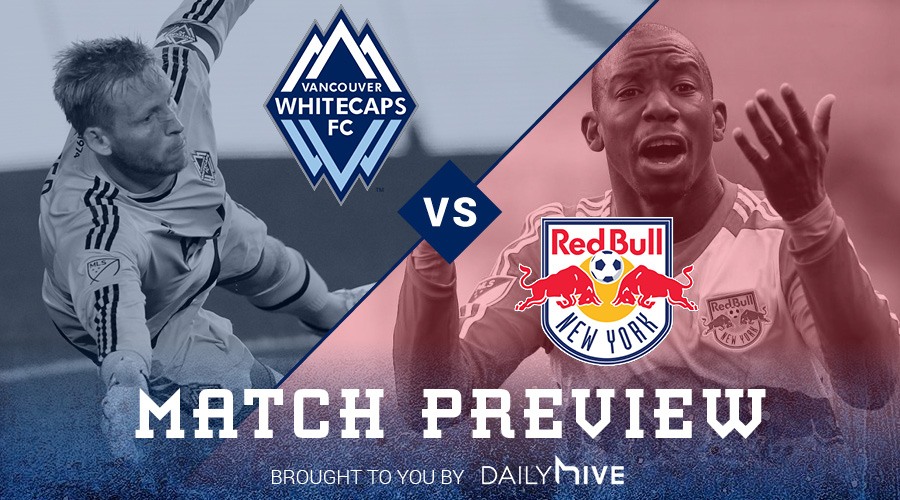 The Vancouver Whitecaps return to BC Place after earning a hard-fought point at Stub Hub Center last weekend against the always difficult to be beat LA Galaxy. This weekend, the Blue and White will face an unfamiliar foe in the form of the New York Red Bulls.

The ‘Caps desperately need a win to keep their playoff hopes alive, that is just a fact.

After two positive matches against Sporting Kansas City and the LA Galaxy, the Blue and White will try to snap their streak of seven winless matches in MLS action. Yes, it has been a while.

The good news is that Vancouver has never lost against the New York Red Bulls since joining MLS. More importantly, the Whitecaps have beaten the Bovines in their last three meetings, including the last two matches at Red Bull Arena.

The last time these teams faced each other in Vancouver was in the first game of the 2014 MLS season. The ‘Caps steamrolled the Bulls by a score of 4-1 with a goal and an assist by the then newly-acquired Designated Player, Pedro Morales. Remember that? Yeah, me too.

The ones that got away

This match is being played in the midst of an international FIFA date, which means that teams are obligated to let their players go to play for their respective countries.

Without a doubt, the Whitecaps will be the most affected party with six players away including Canadians David Edgar and Marcel De Jong, Kendall Waston and Christian Bolaños for Costa Rica, Giles Barnes for the Reggae Boyz, and Blas Pérez for Panama.

It is important to note that at least four of those six players are in the usual starting XI for Carl Robinson. The call-ups, alongside injuries, means that the Welsh Tactician will have only 19 players available on game day. This will be a huge opportunity for players to impress their coach and not only to earn minutes in the final stretch of the season, but also to strengthen their argument for a return to the the team next year.

On the flip-side, the New York Red Bulls will be without the MLS assist leader, Sacha Kljestan (with 15) who was a last minute call-up by US manager Jurgen Klinsmann.

The striker that scores goals

The Whitecaps’ fragile back line will enter this match without their top-two central back options, David Edgar and Kendall Waston. This means that Tim Parker will be back in the heart of defence paired up with …. Cole Seiler? Andrew Jacobson? Me?!?!

As if this was not motive for worrisome thoughts, the Whitecaps will face English striker Bradley Wright-Phillips, who is arguably the hottest striker in the league right now. With 16 goals, he is tied for second place in the goal scoring title race with Sebastian Giovinco and only one goal behind MLS goal-scoring leader David Villa.

Moreover, the Englishman has scored seven goals in their last six matches. So, yes. Oh no.

All in all, the ingredients for a good match are all on the table. The Whitecaps need to build on the positive momentum they have built over the last two games and return to winning ways, otherwise their playoff hopes will continue to slowly fade into oblivion.