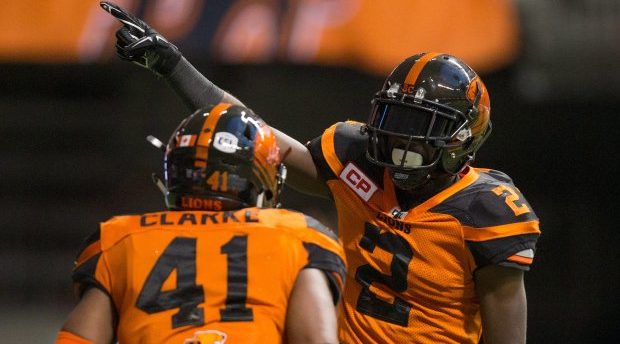 The BC Lions might be really good this year.

This past Canada Day, the Lions silenced the critics and absolutely dominated the Hamilton Tiger-Cats on their own turf, sending a statement to the rest of the league that there’s a deadly threat on the west coast that teams will be forced to deal with.

On Thursday, they Leos return home to host the 1-1 Toronto Argonauts, a team that found a new home, but not an identity.

There’s a lot of new faces on the Argos this season, so here’s what you need to know from both squads ahead of the Week 3 tilt. 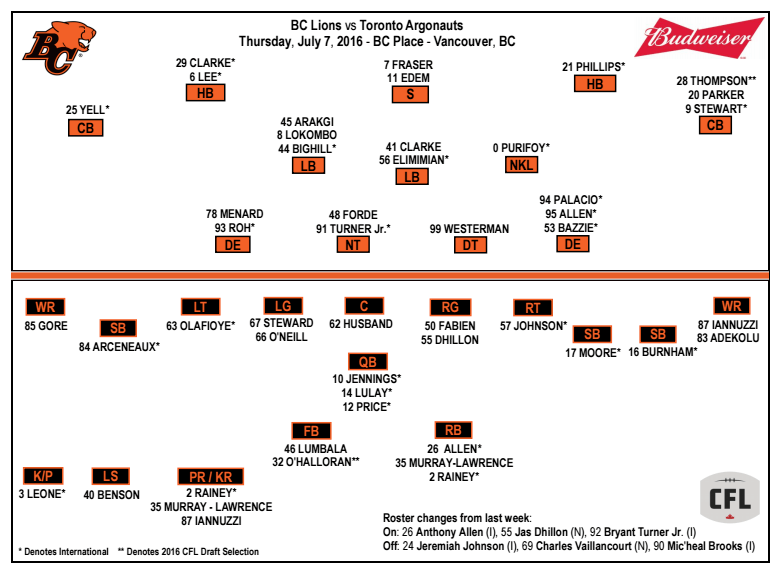 The BC Lions have surrendered just 21 points over their first two games – a league-best, which includes Edmonton and Saskatchewan who have only played one game so far. With the linebacker tandem of Adam Bighill and Solomon Elimimian leading the way with 11 tackles between them, the Leos defence also forced four turnovers last week.

Toronto on the other hand, have given up a league-worst 59 through theirs. They let Hamilton Tiger-Cats quarterback Jeremiah Masoli throw for 318 yards and 3 touchdowns without turning over the ball in Week 1, spoiling their BMO Field debut. Meanwhile in Week 2, BC exposed Masoli for what he is: a backup CFL quarterback.

The Lions kept Masoli to under 250 yards, and picked him off twice. He was uncomfortable in the pocket all night long, and has since been rendered irrelevant.

BC now set their sights on shutting down one of the all-time greats in Ricky Ray, who holds the greatest QB efficiency rating of all-time in the CFL (97.6), among qualified starters. Additionally, Ray sits fifth in all-time passing yards, and is hungry for another strong campaign at the helm after missing the first 16 games of the 2015 CFL season.

The three-time Grey Cup champion had surgery to repair a torn labrum in his right shoulder and a small tear in his right rotator cuff concluding the 2014 season, leading to his extended absence the following year.

Without Chad Owens, the veteran Ray now relies on receivers Tory Gurley and Vidal Hazelton, who both entered the league in 2015 and made an immediate impact. Running back Brandon Whitaker was a new addition to the Argos before the 2016 season commenced. Whitaker led the league in rushing in 2011 when he was a member of the Montreal Alouettes.

Will Jonathon Jennings go off?

"We're still growing, but the potential is really high."@JJ_Jennings10 on the mood going into tomorrow. 🏈 👊🏼https://t.co/EnYOq4v9py

Jennings has yet to throw an interception through two weeks of the young season, and has been quite effective throwing the ball. BC’s offence has yet to showcase its true potential though, and the likes of Emmanuel Arceneaux and Nick Moore need to step it up.

‘The Manny Show’ and Moore have only accumulated 161 receiving yards through two games, and need to be held accountable. Jennings has been able to give both Shawn Gore and Bryan Burnham good touches, but BC will need to depend more on their #1 and #2 receivers going forward to help relieve the defence every so often.

In the long run, I expect even more out of Jennings and company when the man absolutely lit up the stat sheet at times in his rookie campaign last year.

Who’s going to run in place for Jeremiah Johnson?

"It's a matter of coming out, working & being ready for the opportunity."@Ant_Allen ready to show what he's got 👊🏽https://t.co/sAMslTUlFV

Jeremiah Johnson really ran roughshod over Hamilton last week, but the Lions will be without his services after an ankle injury late in the 3rd quarter kept him on the sidelines for the rest of game against the Tabbies.

Twenty-seven-year-old Anthony Allen will take Johnson’s place as the starting tailback. Allen set freshman rushing records at the University of Louisville and led the ACC in rushing in his senior year in 2010 with the Georgia Tech Yellow Jackets.

Allen was a 7th round pick by the Baltimore Ravens in 2011. Although he received limited action throughout his fairly short-lived NFL career, the 6-foot-1, 230-pound Allen was with the team long enough to receive a Super Bowl ring in 2012.

After two productive seasons with the Saskatchewan Roughriders, Allen was an afterthought when new head coach Chris Jones arrived in Regina for a complete retool of the roster. Allen was one of 19 players let go on one day, most of them highly paid veterans.

27-14 BC. BC has won 12 of the last 16 matches against Toronto, dating all the way back to 2008. Expect the Leos to carry on the favourable trend, remaining undefeated.