After two consecutive losses, the Vancouver Canucks will look to return to the win column tonight against the woeful Edmonton Oilers.

Regardless of the standings, these two teams often provide fans with entertaining games. With a quick turnaround and a game against the St. Blues tomorrow night at home, the Canucks would be best served to come out of the gates strong and dictate this game early.

With all of the excitement surrounding 2014 3rd round pick Nikita Tryamkin’s first NHL game, Wednesday night’s contest versus the Colorado Avalanche had a decidedly different feeling. Canucks fans haven’t had much cause to cheer since October, and the introduction of a hulking Russian defenceman garnered a serious amount of attention. Maybe a little too much?

Tryamkin did record his first NHL point during the first period, assisting on the only Canucks goal of the night. It is certainly too early to project Tryamkin as Chara 2.0, but with his size and shot, there may be enough there to mould the 21-year old into a respectable professional player.

The Edmonton Oilers have slowed their season’s awful pace in recent games, going 6-4 in their last 10 games. They’re momentarily free of 30th place in the league though the Toronto Maple Leafs have 3 games in hand and are just 4 points behind Edmonton.

It’s with conflicting feelings that I enter this game. Of course, I want the Canucks to win, but contributing to the Oilers possibly landing the 1st overall pick this summer is almost too much to swallow.

Tryamkin’s debut demonstrated the renewed effort of the Canucks to introduce young players to the starting lineup. Wednesday’s game saw 11 players under the age of 25 take the ice for Vancouver.

However, the playing time of several of those youngsters was questioned early and often…

halfway through the game, virtanen has played 3:39

halfway through game, #Canucks Virtanen has had 5 shifts

McCann and Virtanen are getting Novembered by Willie Desjardins. Just over 6 minutes so far.

Virtanen with 10 minutes of ice time? What a joke.

At this point, it is unclear whether Virtanen’s dip in ice-time is related to him hanging out with his newest buddy, Justin Bieber.

Tonight’s game represents the 70th game of the 2015-16 Vancouver Canucks season. It’s been a relatively disappointing campaign after a surprising playoff appearance last year, but with 13 games to go, tryouts are on for players wanting to make a positive impression.

The much-maligned lack of movement at the deadline leaves the Canucks with four unrestricted free agents essentially auditioning for future clubs and a whole mess of youngsters looking to make a case for a roster spot before training camp next fall. 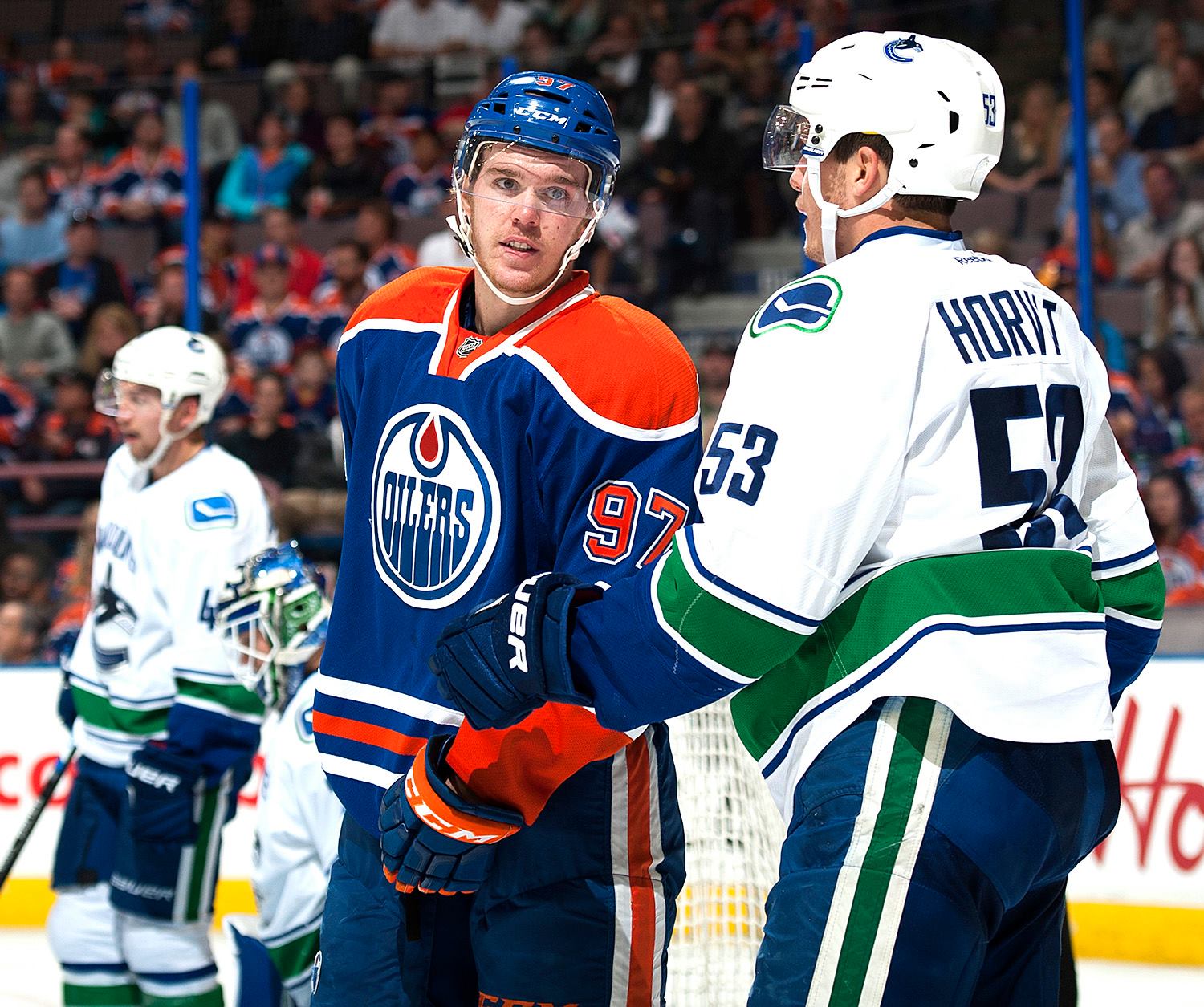 The Oilers have long been the laughing stock of the league and, year after year, fans and critics alike have promised, “this year will be different”. The arrival of Connor McDavid and new management multiplied that sentiment tenfold, but the results have yet to reveal themselves.

There is no doubt McDavid is a generational talent. Aside from his injury, his first season has been a success individually. At 1.06 points per game, only scoring leader Patrick Kane (1.27) and defending Art Ross winner Jamie Benn (1.08) best McDavid in that category.

McDavid – Eberle. On the tape – in the net. #NSHvsEDMhttps://t.co/riylbZv1tj

Despite playing in only 36 games this season, nearly half as many games as Jack Eichel, McDavid (38 points) is just ten points behind the American phenom whose relationship with McDavid evokes a certain Crosby/Ovechkin feeling.

The Canucks held an optional skate this morning, so we’ll have to wait until warmup to see how they’ll line up today.

Jacob Markstrom will start tonight before handing the reigns back to Miller for the St. Louis Blues tomorrow.

The Oilers are fresh off an impressive 6-4 win against the Blues but like the Canucks, haven’t been able to string together any kind of continuous success. I’ll take Vancouver by a score of 4-2.