Just one night after seeing their modest three-game winning streak snapped thanks to the Edmonton Oilers in the final game ever played at Rexall Place, the Canucks play their final road game in their penultimate regular season game.

Their opponent – the Calgary Flames – are playing their final home game of the regular season. But unlike their Albertan counterparts, they won’t be leaving their arena after this season. So thankfully there won’t be over 130 former Flames players in attendance tonight and nobody will be honouring half of the city’s residents in a pre-game ceremony.

The Calgary Flames enter tonight’s game tied with the Canucks with 73 points in 80 games. Thus, this game could go a long way towards determining which teams finishes ahead – whatever your definition of “ahead” is.

The Flames have just two wins in their last eight games and their most recent outing was a 5-4 overtime loss the Los Angeles Kings on Tuesday night. 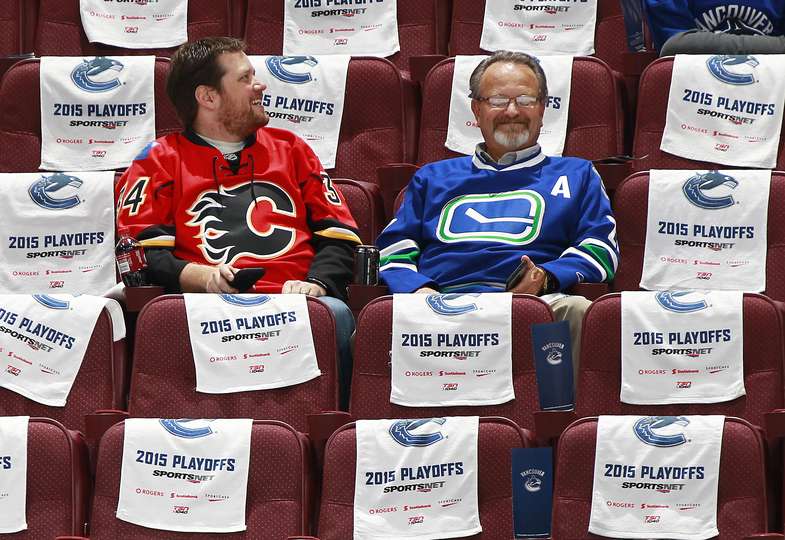 Last April, these two teams were battling each other in a spirited first-round playoff match-up. This April, they are tied for 26th in the overall standings.

The biggest cause of the Flames’ disappointing season has been their goaltending. Both Jonas Hiller and Karri Ramo have had poor years, and then the Flames brought in a declining Niklas Backstrom at the trade deadline. There’s a good chance that the Flames let all three goalies go in the off-season as the three UFAs will free up close to $12 million in cap space.

The Flames are 30th overall in goals against and penalty kill percentage.

As well, the Flames have a defenceman who cross-checked a linesman. 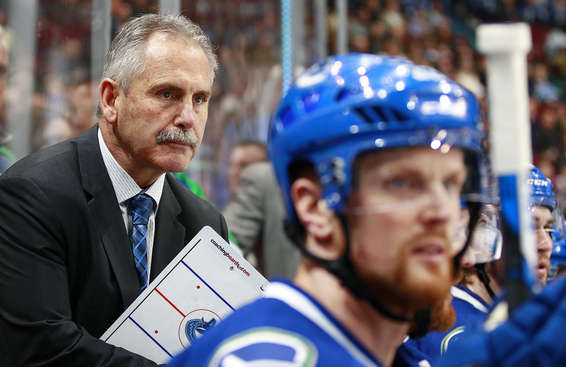 Early in March, Trevor Linden turned a few heads when he declared publicly that head coach Willie Desjardins and the entire coaching staff will be brought back for next season.

The club responded by losing nine games in a row, looking disinterested in many of them.

Linden has obviously backed himself into a corner here, as many armchair coaches have questioned some of Desjardins’ decisions:

Will Linden muster the courage to go back on his word if he sees fit? Or what about if there’s pressure from the owners to make a change? While it’s unlikely, nothing should be ruled out.

Despite the Canucks’ horrible plunge, Bo Horvat is playing hard and producing (just try to ignore his plus/minus stat). With 38 points, he is know only behind the Sedins in scoring, and he’s pulling off moves like this one last night:

Now you see me, now you don’t pic.twitter.com/3cNI3if8Ii

Even more impressive than what Horvat is doing is what he is saying. He speaks like a veteran and not like a second-year player.

Horvat’s leadership will be extremely valuable to guys like rookies Jake Virtanen and Jared McCann. Both Virtanen and McCann will have Horvat to learn from next year as they make the difficult jump from rookie to sophomore.

Many are already labeling him the future Canucks’ captain. Not bad for a guy who just turned 21 years old on Tuesday.

Don’t expect any lineup changes given that the Canucks have so many injured players right now (Sutter, Baertschi, Higgins, Vey, Vrbata, Edler, and Sbisa).

Continuing the goalie rotation means Ryan Miller will get the start in net.

*Update: Jared McCann is injured, Ronalds Kenins is being recalled.

This game is hard to predict, as most games at the end of the regular season are. The Flames will want to put in a strong effort in front of their home fans while the Canucks are playing back-to-back.

I think the Flames will win 4-2. And Team Tank will be thrilled.