The Vancouver Canucks return home after splitting a quick two-game road trip in California. After beating the San Jose Sharks on Saturday, the Canucks were overmatched against the Los Angeles Kings on Monday, losing 5-1.

The Canucks played well for the first two periods, matching the Kings’ speed and grit on every shift. However, they were outworked and outclassed in the final frame.

The loss kept the Canucks tied in the overall standings with tonight’s opponent, the Arizona Coyotes.

The Canucks have 62 points. So do the Coyotes.

The Canucks are coming off a loss on Monday night in which they only scored one goal. So are the Coyotes.

The Canucks won’t make the playoffs. Neither will the Coyotes.

Arizona flirted with the wild card spot for most of the season, but have fallen out of the playoff picture in the last month – pretty much at the same time as the Canucks. The status of Coyotes leading scorer Oliver Ekman-Larsson (49 points) is uncertain after he was injured in the Coyotes’ loss to Colorado on Monday night.

The Canucks rookie has been among the team’s best players over the past few games. He was flying around the ice in the first period of last Thursday’s loss against the San Jose Sharks and he was very noticeable on Monday night against the Kings.

I love the way that Virtanen is playing right now. He skates extremely well, he’s not afraid to hit or be hit, and he drives to the net. He is noticeable almost every time he’s on the ice and he doesn’t get intimidated.

The Canucks brass seem very high on Virtanen as they mentioned him a few times at last night’s Town Hall for season ticket holders (more on that later).

With his recent play, it’s easy to see why.

When news broke that Henrik Sedin would miss Monday night’s game with an injury, fans immediately began speculating as to who would play with Daniel on the first line.

Then it was announced that Daniel would be playing with Linden Vey and Emerson Etem on the first line.

I was among the few people who wasn’t surprised. I figured that the Canucks wanted to stick with Etem with the Sedins, so naturally Vey (as a centre who has some chemistry with Etem) would slide into the first line spot.

With Linden and Benning stressing that they want to take a good look at the younger players for the remainder of the season, expect others to get a chance to play with the Sedins with Henrik returns from injury. Jannik Hansen notwithstanding, I could see Jake Virtanen and Brendan Gaunce both getting a chance to see what they can do with the twins. 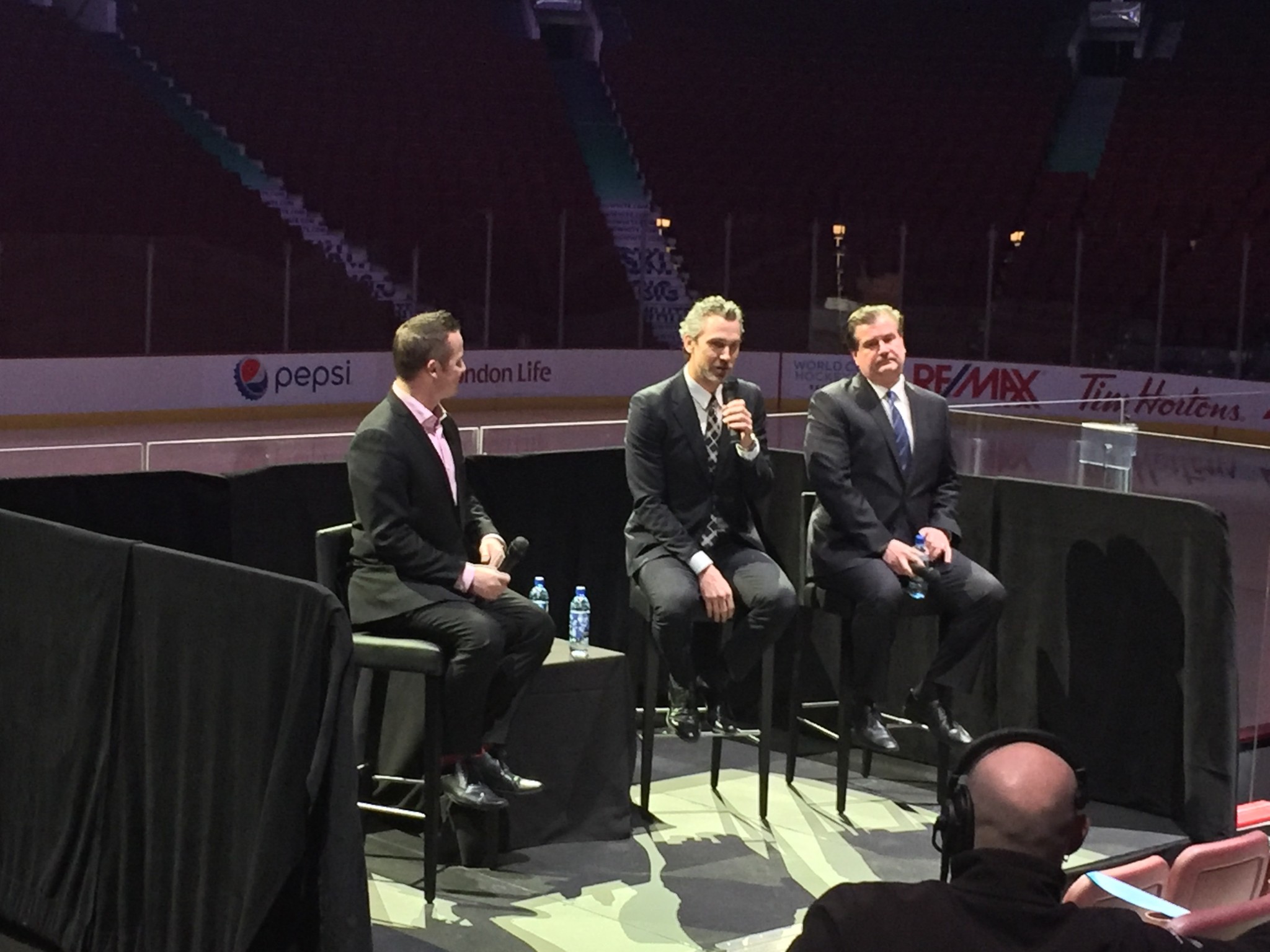 As mentioned above, I attended the Town Hall on Tuesday night at Rogers Arena. This was the second of two offerings from the club – Omar covered the first one in great detail.

The mood at last night’s gathering was very calm. Sure, there was the inevitable trade deadline question and a cranky fan or two, but overall the majority of the fans in attendance seemed to support Linden and Benning and the plan they are trying to put into place.

When it came to drafting, they cited their success in the past two drafts (Virtanen, McCann, Demko, Tryamkin, Boeser) and confidently predicted that they are going to end up picking a good player this year regardless of where in the draft the selection is.

As for development, Benning named Horvat, Virtanen, McCann, Boeser, Hutton, Tanev, and Demko as their young “core” and reminded fans that is was a core of the Sedins, Kesler, Burrows, Hamhuis, and Edler that got us to the finals in 2011. Basically, he was saying that we need to give this new core a few years to develop and play together.

Overall, there were no bombshells or nothing earth-shattering from a news standpoint. Yet it gave the fans an opportunity to speak their peace.

I recapped the Town Hall in my latest Clay’s Canucks Commentary video:

The Canucks are sticking with the same lines they had in Los Angeles. Jacob Markstrom gets the start in goal.

Given how similar the situation is for both teams, I wouldn’t be surprised if this game goes to overtime… Unless Canuck-killer Martin Hanzal goes on yet another cross-checking rampage.

The Coyotes give up a lot of goals. The Canucks have the potential to do so as well.

Let’s go with a 4-3 Canucks win in overtime.