Ever since Alex and Drew broke on to the scene they have offered their audience something very few dance music acts do…genuine, relatable, and honest personality. As a duo, The Chainsmokers have mastered the art of melodic production and live charisma.

Set to make their B.C. return on July 4 for this years’ FVDED in the Park, where up to 22 thousand ecstatic dance music fans will be dancing in the summer sun.

Let’s start with one out of left field…Zac Efron’s “We Are Your Friends” is set to bring the trials and tribulations of an aspiring DJ to the big screen. Is this good or bad for the scene as a whole?

Well based off the trailer it looks super cheesy and we have to assume it will suck…it is only going to perpetuate really silly stereotypes…really it almost feels like a parody of the scene. But, truth is, this will probably do a lot for blowing up the scene even more into the main stream. Obviously it’s not a movie for all demographics, but the young kids who can’t wait to see it will probably want to be DJs now…I mean, we could be wrong, but that’s sort of how we were thinking about it. Who knows maybe the movie isn’t bad.

You guys just released “Good Intentions”, what was your inspiration behind the track and can you think of one time you both had great intentions but then things went horribly wrong?

Well, BullySongs sent us the song he was writing and when we heard it, it really resonated deeply with us. It’s about the fact that we all set out with the best intentions but often find ourselves faced with tough decisions and sometimes end up making mistakes. That can apply to anything from staying out partying one night to even committing a crime. We just felt like it was such a relevant idea in everyone’s lives…we all mean to do well (for the most part) but often find ourselves making tough decisions that don’t always turn out for the best.

As for good intentions going terribly wrong. (Laughs) A funny example for us would have to be going on American Idol.

Alex you just had a birthday weekend: from what you can remember what were the highlights?

(Laughs) Mostly not remembering any of it…but my sister and girlfriend threw me an awesome surprise party with friends from throughout my whole life. I’d never had a surprise party before and they got me really good!

“Selfie” was always meant as a joke—and looking back Kanye feels like a transition track, or an attempt to prepare the masses for more melodic non-satirical productions. Now that that 2014 and the hysteria is behind you, in retrospect, was Selfie artistically restricting and a bit of a setback for the evolution of your sound?

Good question, the answer is yes and no. That song offered us so much, but at the same time, as you said, from a sound standpoint it definitely set us up for a big challenge. You strip that song of the vocal and it’s just a dope Melbourne bounce track. The vocal is really what created all the drama…we never felt like we lost ourselves though, musically or otherwise. The creative process is always a challenge and we feel more confident and comfortable now than we ever have.

New city, new hotel…Alex you swing open the door and run to find out if the TV has the discovery channel. Drew…you take off your pants…what’s next?

Depends, if Deadliest Catch is on.

Drew: I hate that show!

Alex: Yeah, but it’s so hypnotic.

Anyway, if Gold Rush is on then we are both happy. Besides that it’s usually a struggle to get on hotel wifi and one of use usually have some snarky comments about how slow it is.

You guys have been working on a collaboration with Tiesto—largely collaborating has not been your norm, so why now, why Tiesto?

With Tiesto the process was so easy and natural. The guys list of successful tracks is insane and he knows what is going to work and what isn’t. Funny thing is our song with him has been done for weeks but we are REALLY struggling with what the sample should be before the drop. Literally, the 1…2…3 drop part. It’s so dumb; it’s literally been like five weeks of going back and forth and trying to find the right one. So you can imagine how dumb the conversations and brain storming sessions are getting now.

You guys chat a lot on Nice Hair Radio and the natural extension of that is obviously a talk show. If you were to pitch a late night show to a cable company what would you call it and who would be your first three guests?

We talk so much because we have a lot to say! But, we also think it’s nice because it’s unusual for DJ radio shows, and it’s nice when you get to know your favorite artists. We are very candid on the show so you get a really good sense of who we are as people. If we pitched a show it would be a dating hotline show where we gave advice on relationships. Our first three guests would obviously be George Clooney, John Mayer and Harry Styles. Some of our segments would include when they lost their virginity, their first bj story, and dream girls/boys.

(Laughs) Is that real? That’s amazing…hey if it’s true….we don’t speak ill of Calvin…that guy is a legend.

Looking down the barrel of the rest of 2015 what do Chainsmoker fans have to look forward to?

Lots of music! We have a really aggressive release plan, and some ideas for the videos. Also we are doing a crazy fall tour with our brand new production which we are premiering at Firefly Music Festival. We are really excited about all of it!

What is the best advice you two have ever received?

Is it safe to say life shouldn’t be taken too seriously?

Well you could look at that both ways life is serious and you should cherish it and do what you need to do to be happy. But with life comes responsibility, and the impact you have on those around you. So just live a full life, one that’s positive and special to you. Time is the only thing you can’t get back.

Finally, on July 4, you are set to play FVDED in the Park. With a sea of nearly 22,000 faces ready to have a good time, why should diehard fans and newcomers alike be excited for your set?

Honestly, we were saying it’s the best name for a festival we have ever heard. But really there is never a good answer to this question. For the people that know us, they know we will bring it. For those who don’t we are excited to give them their first TCS experience. 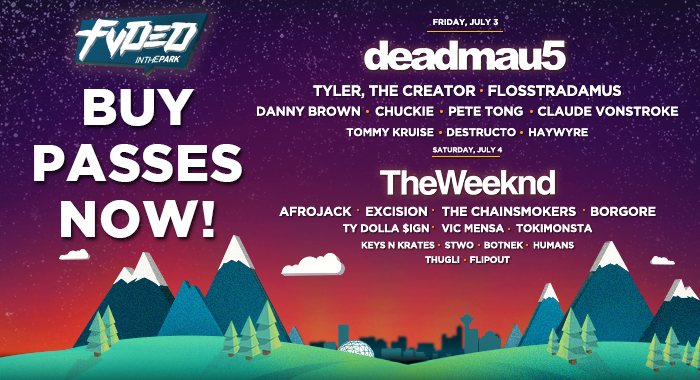 With tons of new material on the way and larger than life personalities, The Chainsmokers are definitely a good reason to check out this year’s iteration of FVDED in the Park—July 3rd and 4th, grab your passes while you still can!