Almost every other corner in the city of Vancouver seems to have a tattoo shop on it nowadays. One of the OG’s is Funhouse Tattoos, which originated on Broadway and now has two locations — the mainstay on Cambie and their all new location on Oak Street.

What better way to conduct an interview than sitting in the chair and getting a tattoo done by the man behind the shop.

Founder Art Godoy moved to Vancouver from California and didn’t expect to open up a tattoo shop right away, but Broadway caught his eye and the rest is history.

“When I first came here I didn’t have the idea of opening up until I took a look around and I thought Broadway is an awesome spot to open,” Godoy told Vancity Buzz. “It reminded me of places I used to work, like when I tattooed at a spot in Hollywood on Sunset Blvd. at a place called Purple Panther for a few years. The first thing I thought about Broadway was, ‘Man, this could be another Sunset Blvd.’ When I opened, that was my whole goal – I thought there would be more neon and more development, but it didn’t happen.”

Through the years Godoy has tattooed thousands of clients including the Guiness Book of Records “Most Tattooed Woman’ Julia Gnuse. If you’ve gotten ink done then you know how addictive it becomes and how loyal to your shop you can be. 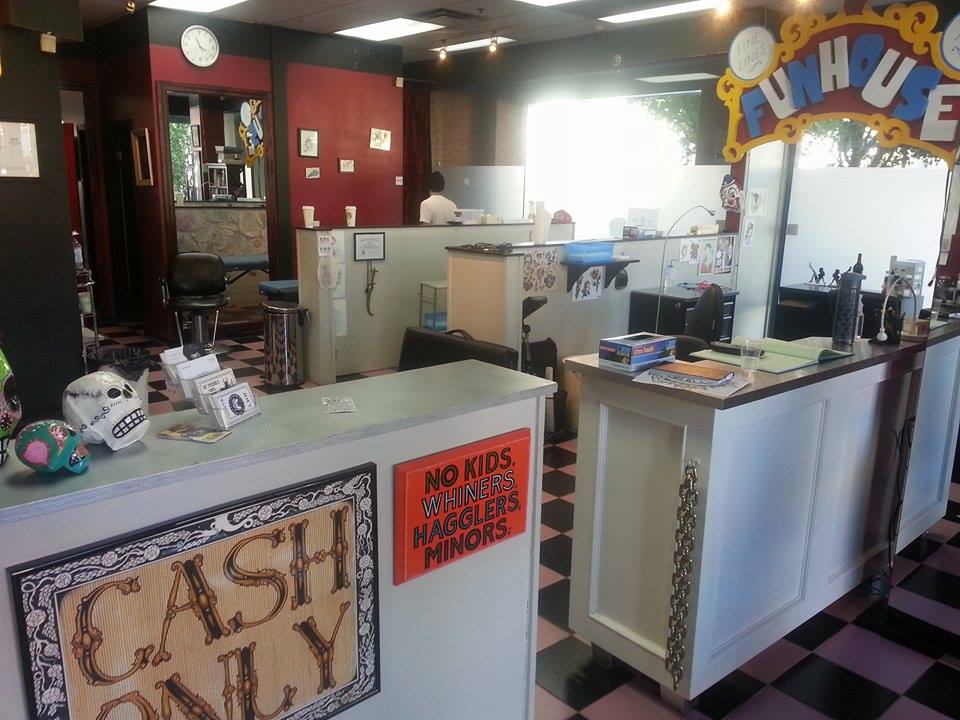 “There are quite a few people still from the Broadway days and the Broadway days started in ’98. If you look back and see how many years that is – that’s a lot of years of loyalty. Sometimes you don’t hear from these people for a while, then the next thing you know you see them and they look a lot different. They were kids when I started working on them and now a lot of them have their own kids. It’s cool to see that.”

Godoy is going on thirty-years of tattooing next February and has brought on some of the best artists in the city. Even though some have come and gone, one thing is for certain, Funhouse seems like the place to be for artists to take that next step in their tattoo career.

“We have a pretty good reputation in the city. A lot of the work that we do, a lot of people in the city won’t touch – some people can’t touch. A lot of small, realistic pieces. We do cover-ups that most people wouldn’t even know where to start on. I think for a lot of artists they feel like they’ve plateaued in the shops they were working in and they just want to up their game a little bit. That’s what we always try to do here; maintain really high standards of artwork, as well as health compliance and courtesy to clients.”

A true testament to the shop and Godoy himself is when former employees move on to open up their own shops. One of which, Jory Helmes, opened up in Duncan, B.C. and had some kind words about Funhouse and his former boss.

“I currently own and operate Bully Boy Tattoos Inc. I worked for Art Godoy at Funhouse tattoos for 5 years, and wouldn’t be where I am today if it weren’t for both Art and everyone else who I worked with there. Mark, Jeremy, and Sasha were the ones I worked with the longest. There’s no way I can properly express in such a short blurb how much I learned there (Funhouse), or how important it was to my tattooing and life in general. I even met my wife there! I owe my versatility, confidence and machine knowledge to Art. I’m a pretty lucky guy.”

I was able to contact some faithful customers who gave their feedback on why they chose Funhouse Tattoos and what their experience in the shop was like.

Pat Brand: I wanted to do something a little “wild and crazy” for a special birthday, my 60th. My son Jeremy had some tattoos done at Funhouse, and suggested that I go there. I contacted them, made an appointment, and proceed to get inked. Juan explained the whole process. I gave him a description of what I wanted, he did some drawings, we agreed on one that I thought looked great, and he proceeded. I was a little nervous, but he was really helpful in calming my nerves, he was very professional, and I was super happy with the result. I would have no hesitation in recommending Funhouse to anyone looking to get a tattoo for the first time.

Steven Janes: I was 18 years old and really wanted a tattoo. It took me months to decide what to get; never mind finding an artist. After deciding I wanted a piece on my shoulder to represent my heritage I had to find someone to do it for me. My best friend just got his done and recommended I go see Jeremy at Funhouse on Broadway. His tattoo looked amazing. Walking in I was confident until I sat in the chair. Hearing needles buzzing around me I got really nervous. Jeremy and the other artist working were awesome and very helpful. Expecting tones of pain it went a lot better than I could imagine. In just under 2 hours I had my first piece and was excited to show it off.

If you’ve never been to Funhouse then you can expect a fun environment, with a ton of chatter and stories that you will never forget. Below are some more goodies from Godoy.

On the tattoo trend on TV:

“My brother and I were asked to go on L.A. Ink, we were asked to go on New York Ink and there was another show where a guy traveled around the world getting tattooed by people with different techniques. But the L.A. Ink and New York Ink interviews didn’t go so well. They didn’t like what we had to say, because we took a stance on how they portrayed tattoo artists. They tried to portray them as clowns and they tried to build up the drama in shops, which does not happen. Not everyone wears the tattoo uniform that Cat Von D wears. On one hand, I like that it has opened the doors for the public to get tattooed and know what’s possible artistically, but on the other hand, it’s made it seem like it’s a job for someone who’s an eccentric clown and I’m not an eccentric clown. The other downside, it’s made it so a lot of people think that they can just get into tattooing. They buy their supplies and they start scribbling out in their homes without any idea of safety for their clients. People need to educate themselves. The problem is now that there are way more people that want to tattoo then there are shops to apprentice them in.”

On the Godoy Tattoo Machines:

“We started tattooing in 1985 and during that time there were very few suppliers. You had to be referred by other artists who were already established to be able to buy from the national tattoo supplier. We started noticing that each machine was running different. Some you could get to do what you wanted them to and others you had a really tough time. So we started to dissect the machine and understand its components. Basically it’s modeled after a doorbell; it’s just an electro magnetic doorbell. So we thought how complicated could it be. We started to figure out the application of the tattoo with its direct relation to function; magnetic field, different types of wire, wire gauges, springs, spring tension and we’re talking electro magnetic tattoo machine not a rotary machine that’s popular. Little by little it started to evolve into experimenting with different types of materials and ingredients and components. Pretty soon it became time to patent it and protect these things. So right now we have four international patents on tattoo machines and tattoo related inventions.”

On former employees opening their own shops:

“The way I see it was, they came here and this was a transition in order for them to be able to get where they were going; which was opening their own shops. Mark Lankin for example, that guy opened up a shop in Squamish; that guys got more talent in his little finger than a lot of people do in their whole body. That guy perfected his technique so unbelievably here that when he decided it was time to go I was like you have our blessing. He knew he was not just representing himself, but where he came from. Jory Helmes was another guy; I remember a tattoo that guy did where he forgot to put an eyebrow on a girl that he tattooed and then I really let him have it. You can’t be doing that kind of stuff and after that day a light bulb seemed to go off in his head because now the guy is doing realistic portraits and tiny beer bottles, less than a half inch tall where you can actually read Budweiser on the label done with a single needle. Jeremy Riley, he’s another one, he’s at Tattoo Union and that guy he’s one of a kind. That guys a genius, but I don’t know if he knows it or not. But he’s a definite testament to what went on here. He’s started at the original Broadway shop. It is a testament.”