Grammy-nominated band fun. has announced a co-headline date with Tegan and Sara, Saturday, August 31 at Ambleside Park. Tickets go on-sale to the general public Friday, April 12 at 10am at www.livenation.com but you they will also be on sale tomorrow, see details below.

A portion of the ticket sales from the tour will benefit The Ally Coalition, a partnership created by fun. and designer Rachel Antonoff devoted to encouraging and inspiring the music, fashion, and entertainment communities to take action in support of LGBTQ equality. Each tour stop will showcase the Equality Village, featuring The Ally Coalition as well as other local and national LGBTQ equality organizations.

Tegan and Sara¢s 13-year career has seen them build an avid global following of fans and fellow musicians alike. Their unique ability to bridge the pop and indie worlds has allowed their music to cross all traditional boundaries of genre, from being covered by The White Stripes to collaborating with superstar DJs such as Tiesto and David Guetta. Having sold nearly 1 million career albums and toured with acts from The Killers to Neil Young, Tegan and Sara recently released their 7th studio album – Heartthrob.

Tickets will be selling tomorrow Wednesday, April 3, 2013 at 10 a.m. PST at  http://selectyourtickets.com/promo 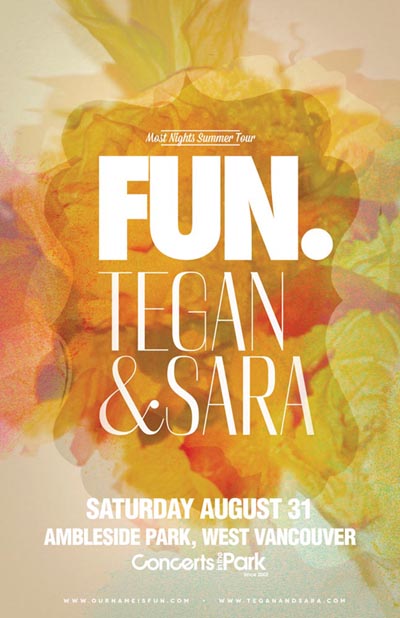