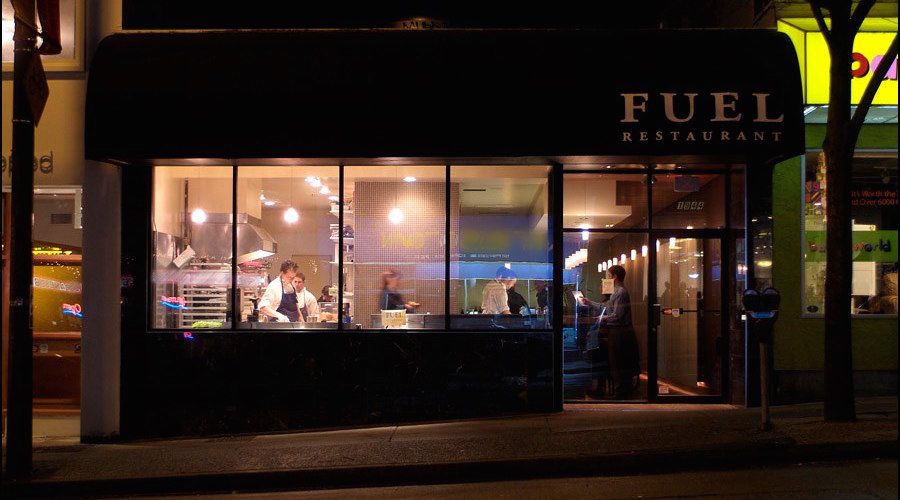 It was 2006, and Chef Robert Belcham was hungry for change. He had just finished the gruelling annual Dine Out Vancouver week at C Restaurant, and declared “I’m done. I’m ready to open my own restaurant.”

Belcham is relaying the narrative of his culinary journey over lunch at his restaurant Campagnolo, and while we pause to reflect on the present–like the colourful array of heirloom tomatoes served in a simple salad and the sweet-salty tango of his thoughtful take on melone e prosciutto set down before us–the subject at hand is Fuel, the game-changing restaurant that marked Belcham’s first foray into leading his own visionary charge. 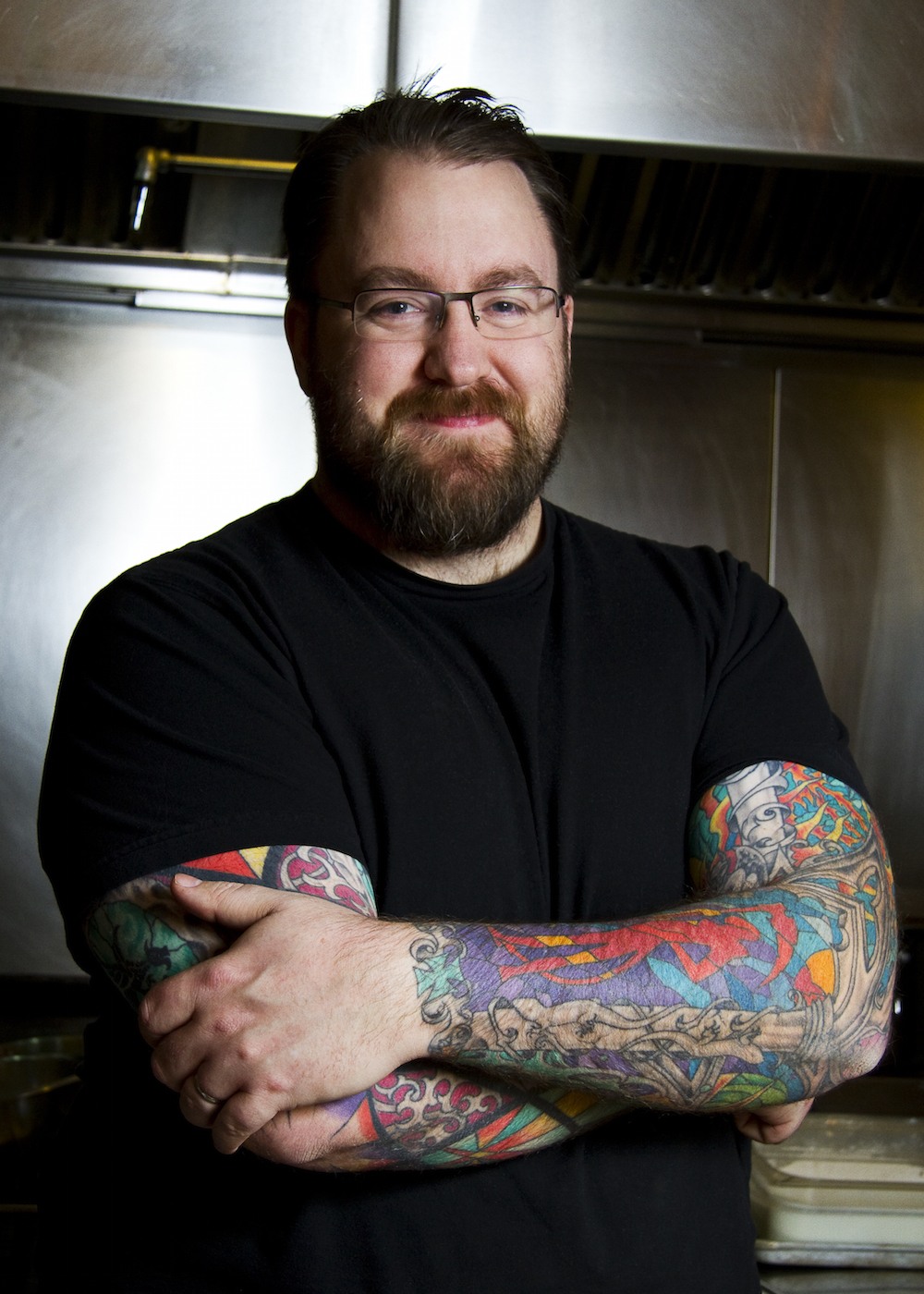 Immersed in professional cooking, the BC native had made his way to California and Chef Thomas Keller’s legendary French Laundry before switching gears and spending time as a private chef in the Bay Area, before returning to Vancouver and landing, eventually, at C Restaurant.

Belcham quit C in the summer of 2006, and set to putting his ideas to paper and, teamed up with partners Tom Doughty and Tim Pittman, Fuel was born.

“The whole idea was to have super clean lines a room where the star of the show was the food,” explains Belcham. He and the crew transformed the space with their own hands, from plumbing to flooring. “It was my dream restaurant.”

Dinner and a show

A far cry from the monastic atmosphere of French Laundry, Fuel was one part performance art, one part culinary revolution. It was loud, it was bold, it was theatre. But it was also deeply respectful, not only to the intellect of its patrons, but also within itself; cultivating a profound connection to local farmers and suppliers, Belcham and Fuel led the charge in what we now know under the exhausting “farm-to-table” buzzword umbrella.

Fuel had white tablecloths, an open kitchen (practically unheard of at the time), a set of bar seats facing the kitchen, and great big picture windows offering passersby on Kitsilano’s West 4th a clear view into the kitchen–including on days when whole animal butchery was on the docket. In the ensuing decades, Vancouverites have become at ease with this restaurant layout, and in a way Fuel’s layout lives on, thanks to the space’s successor tenant, Fable, which made very few cosmetic changes to the room.

Though we’re just casting our memories back a mere decade, many of Fuel’s contemporaries are long gone–like Angus An’s neighbouring Gastropod, Mark Brand’s Boneta, or Aurora Bistro–and their chefs and leaders, like Belcham, adapting to the shifts in consumer demand, economy, and the overall fickleness of the restaurant biz. This was in Twitter’s infancy, pre-Instagram, and when Top Chef had only one tentative season under its belt.

It was also right around this time that UK import Gordon Ramsay was making a name for himself insulting young cooks with big dreams on the small screen.

Fuel’s onetime General Manager Katharine Manson remembers customers had a new expectation of Belcham: “Guests would ask us, ‘when is he going to yell?'”

But he didn’t yell. That’s simply not his style. “I kept the kitchen super controlled. It was subdued, and quiet and calm. Very professional,” says Belcham. 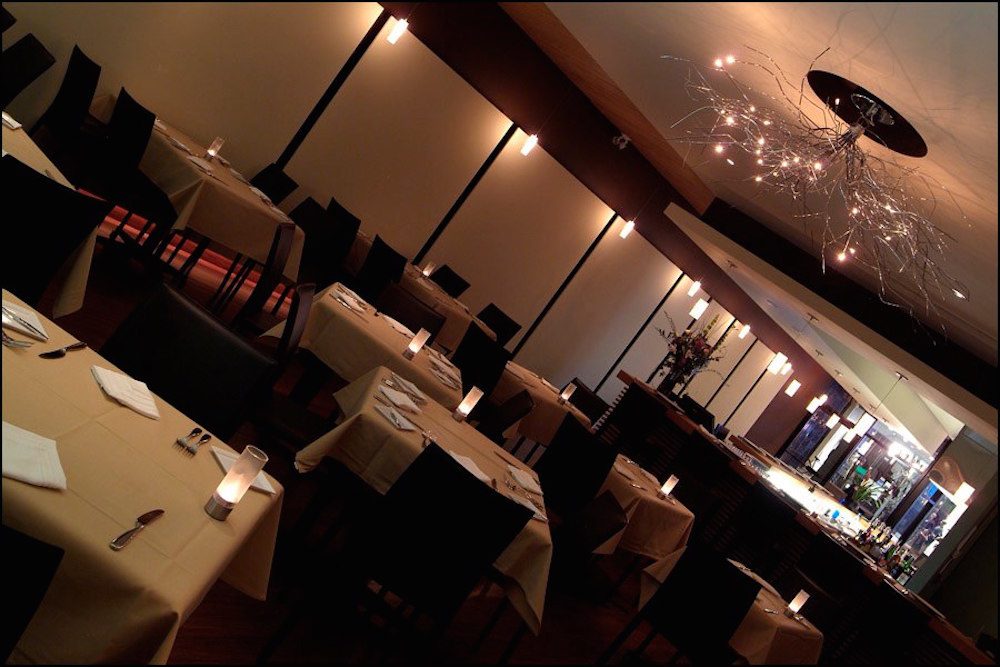 “It felt, a little bit, like a dance,” adds Manson. “It was a small kitchen. There was so much pressure there.” Guests seated at the “chef bar” facing the flames and cooks could literally watch their dishes being made, plated, and placed on the pass for pick up. They could ask questions. They might end up with a morsel from a chicken being carved up for a table in the dining room, much like when you hover around the kitchen as the holiday turkey or roast is meeting the knife.

By breaking the fourth wall, to borrow from the theatre, Belcham essentially made his diners part of his team for the night. It forever changed dining out for Vancouverites, but it also meant a new kind of cook was set to emerge.

“It was also really difficult to find people–cooks–who were willing to open up. who were extroverted, who could handle people asking them questions,” elaborates Belcham.

“Everybody who was in the [Fuel] kitchen at that time could have been a chef at another restaurant in the city, easily, but they wanted to work for me,” Belcham continues. “That’s what made Fuel so special.”

If you turn the tables, however, Belcham is what made Fuel so special for everyone in the kitchen. That’s one reason why so many former Fuel-ers signed on to take part in a special one-night-only Fuel Redux dinner at Campagnolo this month. The sold-out dinner was assembled to not only mark the 10-year anniversary of Fuel’s launch this December, but also as a nod to the role Belcham and Fuel played in turning a page in Vancouver’s culinary history.

Beyond their dedication to the ingredient, the brigade at Fuel, front and back of house–and, notably, combined–had an evident respect for each other and the industry.

Much of the staff continued on to open their own restaurants, or grow branches and blossom in other areas of the hospitality industry; Manson, for example, runs her own boutique PR firm, and works with many culinary clients. She credits Belcham with giving her the wings and the space to get her career going as she wrapped up stints at his Fuel successor, Refuel, and his short-lived Fat Dragon.

No one commanded respect more so than Fuel’s leader, Belcham, who set the tone for the kitchen and, that tone is readily echoed in the many people whose lives he’s affected. 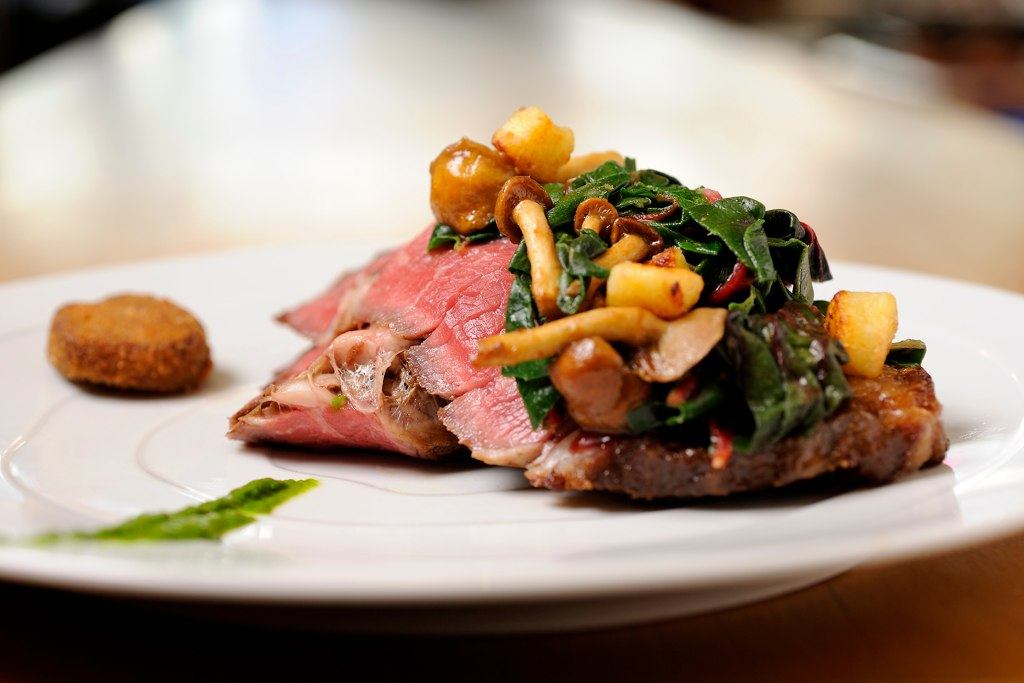 Chef Geoff Hopgood, who had worked with Belcham at C, came on board as Chef de Partie after Fuel got off the ground, and, like Manson, were more than happy to be part of “Fuel Redux” in 2016.

Hopgood, who owns and operates Hopgood’s Foodliner in Toronto, recalls a tasting menu birthday dinner he had at C, and knew immediately he wanted to work for Belcham. “The culinary scene in Vancouver was pretty forward-moving,” he recalls of that era. “I didn’t see anybody who was inspiring me to be in the kitchen like Robert was,” Hopgood adds.

“He just wasn’t afraid of anything,” elaborates Hopgood of the Fuel-era Belcham. “It was like this balance of how to dream big and do a dish that has never been done before–at least not in Canada–or a technique…but bring it back to real food.”

That ‘real food,’ starts with the farmer, grower, or fisherman, and Hopgood says his mentor Belcham made the mould in that respect. “He’s really dedicated himself to the people he’s supported over the years. Those relationships you have to cultivate over time.”

True enough. Flash forward to 2016, and Belcham is lamenting that Sloping Hill Farm, his pork purveyor, he’s relied on from the Fuel days to the present has recently retired. He still takes in regular whole hog deliveries and breaks down the animal and cures the meats in-house. 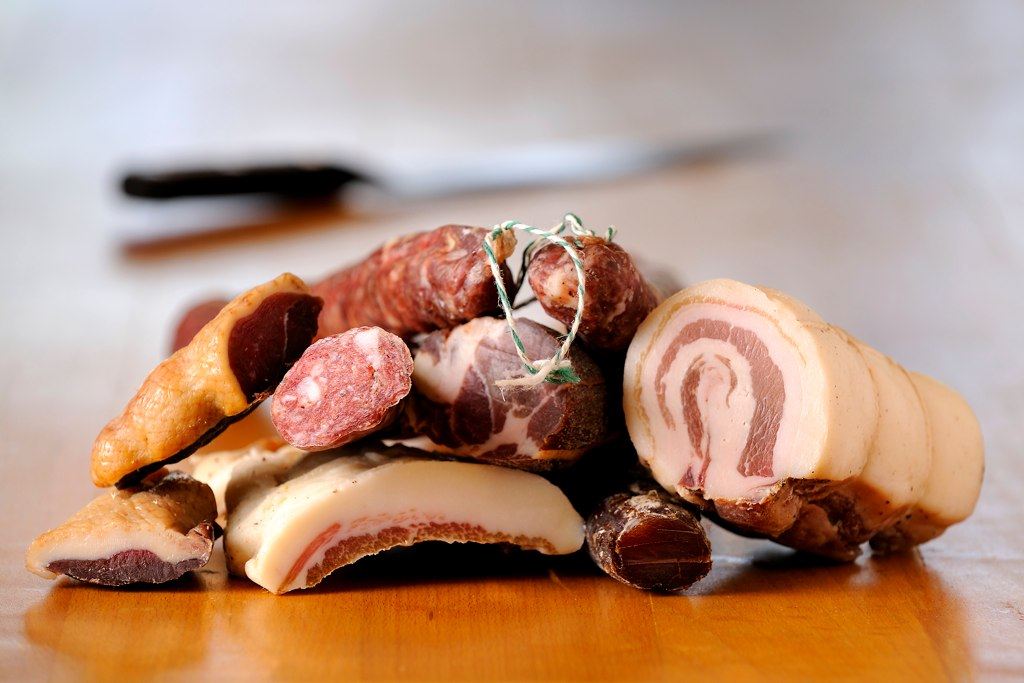 Back in the Fuel era, a chef on staff like Hopgood would have been among those on butchery duty.

“The direction that we were headed in [was] that we knew we were going to accomplish great things together as a team,” recalls Hopgood. “It wasn’t easy; we would work 14 hour days, do all of butchery, all of our mis en place, break down whole animals. There was no ‘I can’t do this.’  The bar was set really high.”

“Nobody was doing whole animal butchery at the time,” affirms Manson, recalling whole lambs and pigs being broken down in front of the West 4th Avenue-facing windows. “Nobody.”

And the innovation was evident on the plate, too. There was foie gras, whole roasted chickens, and dishes invented ad hoc ahead of each dinner service. “What [Belcham’s] food taught me is that it doesn’t have to be super serious, it’s just about what’s good. There’s a lightheartedness,” says Hopgood.

The menu was never the same night to night, though some dishes would stay around, or evolve. Their fried chicken stuck around right through the Refuel era; the concept saw the stripping away of the white tablecloths and a step back from fine dining in order to stay afloat. The economic downturn of 2008-9 hit restaurants hard, and Refuel was Belcham’s attempt to keep the dream alive. Refuel made it to the spring of 2012.

“Sometimes I think things like [Fuel] aren’t meant to last,” reflects Hopgood.”Fuel was so unique. It should have stood the test of time. It was such a unique point in time for [Belcham’s] career.”

Back to the future

Hopgood says Belcham was scant with his praise, but rather than experience that as a deterrent, it served as a powerful motivator. “It was a good thing that he wasn’t coddling you,” says Hopgood, who has, in turn, drawn much from Belcham’s leadership as he leads his own teams now. Belcham offered respect and thanks to his team, and for Hopgood, he was spurred by Belcham’s approach to want to work harder for him.

It was an “all in” mentality that Hopgood still appreciates. It’s why, he attests, all of the cooks wanted to take part in the Fuel Redux dinner. Respect. Teamwork.

And there’s that notion again, similarly to what Manson recalls: “It was like dancing,” says Hopgood of how the crew worked together in the kitchen, juggling elaborate dishes that took much tending to, while engaging with the customers at the chef’s bar. 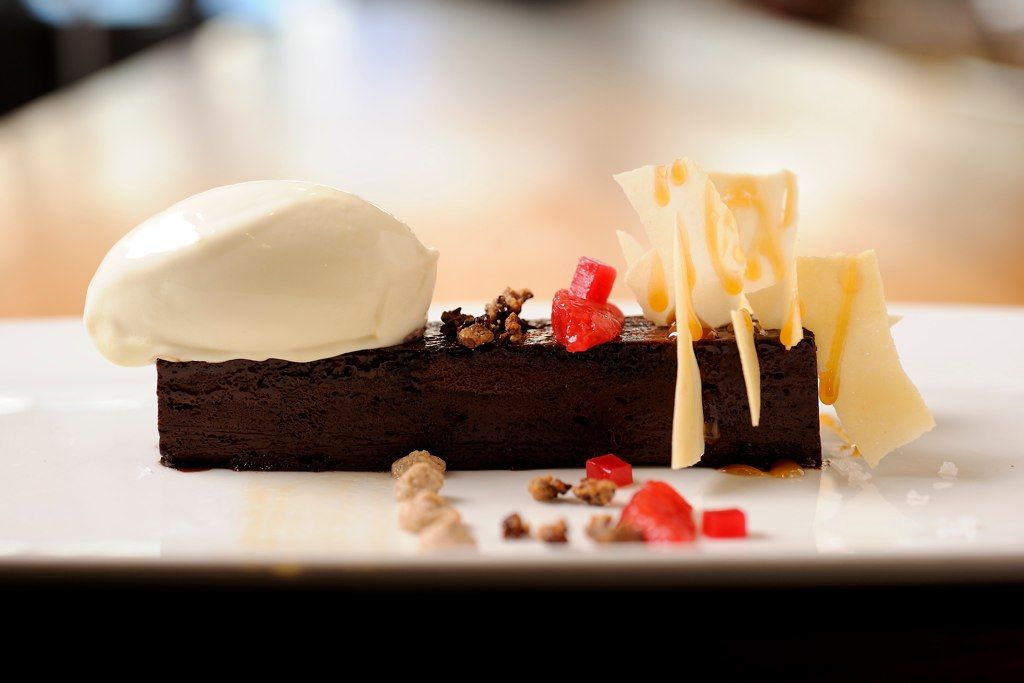 Mentorship wasn’t limited to the kitchen, which was key in an operation like Fuel where there was, quite literally, no place to hide. Chefs would sometimes serve dishes, and servers would take part in constant workshops and learning experiences so they could speak with authority to their customers.

So much has changed in the Vancouver restaurant scene. But so much is, fundamentally the same. To some extent, while Fuel forever changed Belcham’s life, he continues to inspire, lead, innovate, and stand by his principles.

“I don’t think he’s changed at all,” observes Hopgood. “He’s just always been so dedicated to his craft. And that’s difficult.”