I’m a fan of one-person plays. There’s no better way to see into a character’s heart and soul. But the performances can drag on.

Not so withi Itai Erdal’s How to Disappear Completely at the Gateway Theatre. At just 60 minutes, it holds the audience’s attention. And this part documentary, part conversation on life and death and love packs an emotional punch that I wasn’t expecting. 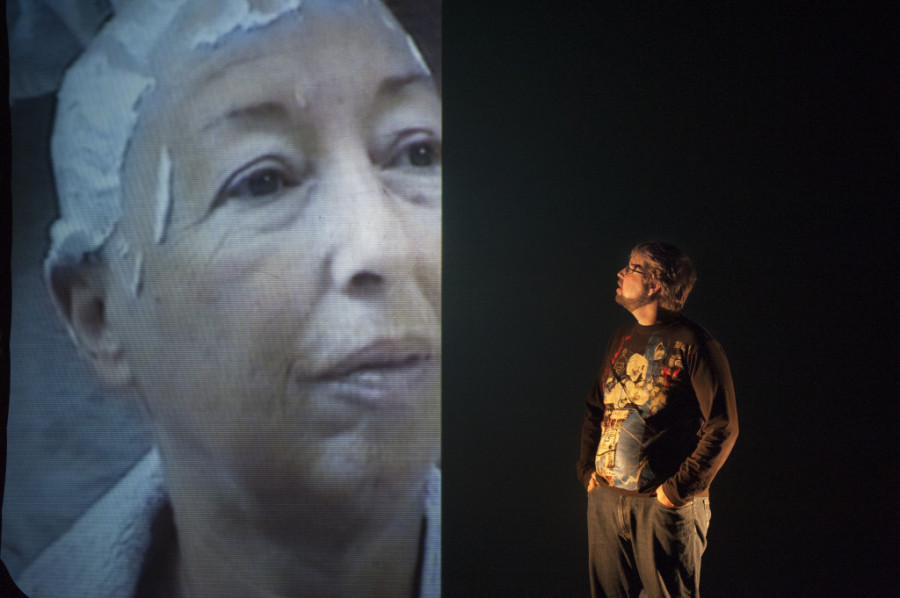 The story itself is straightforward. In September of 2000, recently graduated and living in Vancouver, Itai received a phone call telling him that his mother Mery had been diagnosed with lung cancer and had nine months to live. He moved back to his native Israel to spend the remainder of her life caring for her – and in the process, shot hundreds of photos and hours of video to document her struggle and the effect on her family. Some of the photos and videos are projected against the bare wall of the stage, empty except for Itai. They show a smart, stoic, witty woman in the throes of a horrible disease, still puffing on her cigarettes. Itai’s narrative injects life and personality into Mery.

He’s a gifted storyteller – at times ironic, wryly funny, confident – very Israeli. His memories of his mother’s final days are heart-wrenching and startling. I’m not Jewish, but when Itai recited Kaddish, the traditional Jewish prayer for the dead, I mouthed the words with him with tears in my eyes.

Then there’s the light. Itai is an award-winning lighting designer and he uses his skill to full effect in this performance, at times casting himself almost totally in shadow, sometimes in a wild background of colour that reminded me of the late 1960s. It was brilliant and effective. But I also saw something else, and told Itai at the opening night reception. For much of the performance, he carries around a lighting box with a very long cord. The sound of the cord scraping on the stage as he moved reminded me of a ball and chain – and given the burdens he unveils, seemed fitting. I think he liked that.

How to Disappear Completely is produced by The Chop Theatre and directed by James Long. Performances run through November 22 at 8pm, with special matinee shows November 18 at 1 pm, and November 22 at 2 pm. For more information, visit the Gateway Theatre website.