No flowers, no chocolates, but I did get a day off for Valentine’s Day in Sochi.

Earlier last week, I stood in a slow-moving line at one of the ticket booths in order to buy a ticket to see the Friday morning curling draw. I really wanted to watch Canada play Norway, aka Team Awesome Pants. 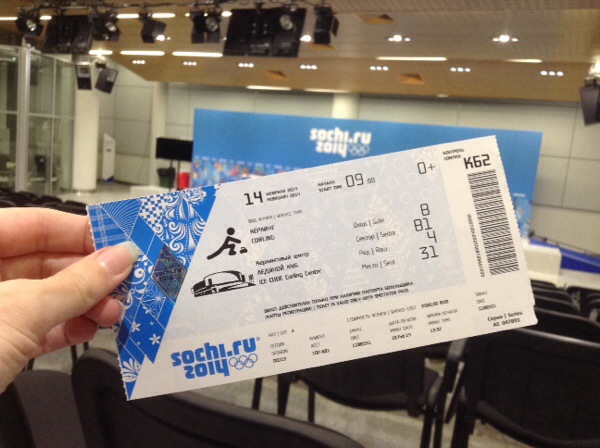 Sadly, Norway’s good pants must have been in the wash, since they were wearing some still-loud but not as stylish floral pattern.

I am by no means a curling expert, but have tried the sport a couple of times, attended the World Championships when they were in Victoria as well as a Continental Cup, and worked as mix zone supervisor for wheelchair curling during the Vancouver 2010 Paralympic Winter Games. But I think I just confused the poor American couple who asked for help understanding how the scoring worked. 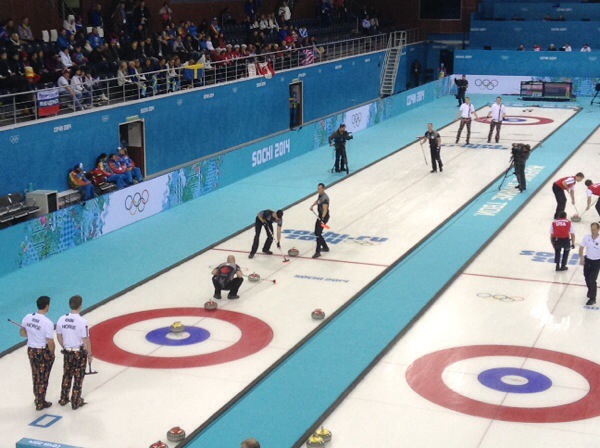 Canada made some amazing shots to beat Norway, but the really exciting sheet turned out to be Sweden v China (who were undefeated after 4 games by this point). The arena never did fill up, and all of the Canadian and USA fans left after their games were over, but Sweden v China was a nail-biter that went to extra ends, with Sweden eventually emerging triumphant.

After a bit of shopping and pin trading (a long-standing Olympic tradition), I headed over to Iceberg once again to help out with the mix zone for the men’s free skate. Wow, I thought ice hockey mixed zones were intense but they’re a walk in the park compared to figure skating. I can’t even imagine how much crazier it would have been if Plushenko had stayed in the competition.

The highlight of the night — and I will count this as my Valentine’s Day gift from the universe — was riding the bus back to the Main Press Center at 1 a.m. and realizing that ohmygod that’s Kurt Browning on the bus with us! My inner fangirl was jumping up and down, but outwardly I remained calm and professional — unlike a few other volunteers during the competition who did ask the competing athletes for autographs/photos/hugs in the mixed zone. A big no-no!