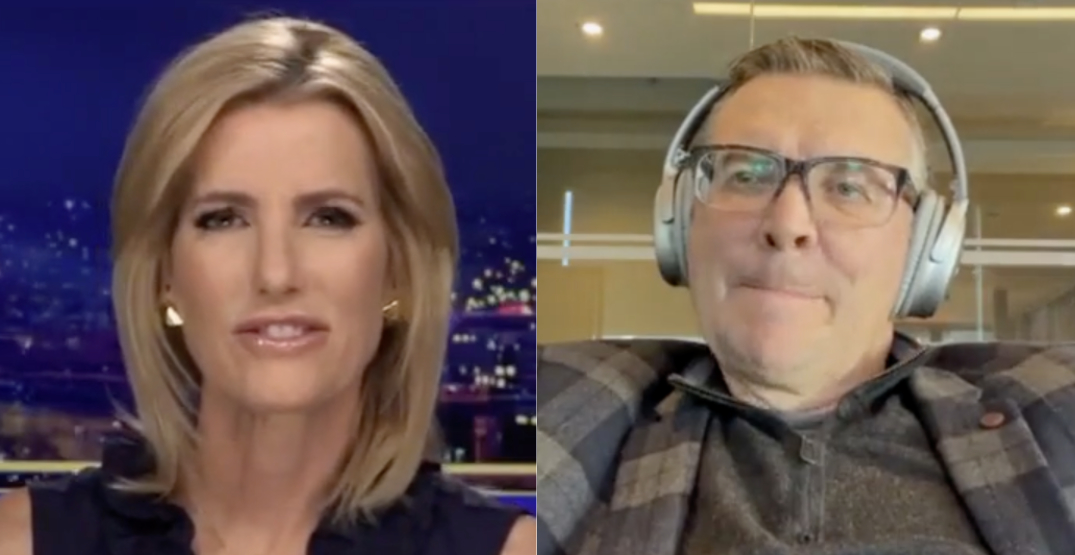 Fox News turned to former NHL star Theo Fleury on Tuesday night to get insight on Canada’s response to the pandemic.

“It does seem like there’s a subtle creep by leaders here in the United States to make us more like Canada,” host Laura Ingraham said to begin the interview. “But in your estimation as a Canadian, that would be a mistake?”

“Yes, very much so,” the former Calgary Flames star replied.

Fleury told Fox News on Tuesday that a whopping 50,000 truckers and 1.4 million people will arrive at Parliament Hill in a convoy en route to Canada’s capital.

The former hockey player, who scored 455 goals and 1,088 points in 15 NHL seasons, has been quite vocal about COVID-19 and vaccines throughout the pandemic, particularly on social media.

Regina Police estimates were much lower than Fleury’s projection, which he made in an appearance on The Ingraham Angle on Tuesday. As of Monday night, Regina Police said the convoy en route to Canada’s capital, dubbed the Freedom Rally, included 1,200 trucks and vehicles when it passed through the city Monday night.

Fleury’s estimation would temporarily double Ottawa’s population, currently estimated at 1.18 million. He called it a “revolution.”

“In Canada, we have one of the biggest revolutions happening,” he said on the program. “Right now there’s 50,000 truckers and 1.4 million people headed to the parliament in Ottawa. And they’re going to stay there until Trudeau resigns, or they give us back all of our freedoms and rights.”

Last night on Fox News, noted anti-vaxxer Theo Fleury told Laura Ingraham "50,000 truckers and 1.4 million people headed to the Parliament in Ottawa, and they're going to stay there until Trudeau resigns or they give us back all of our freedoms and rights." pic.twitter.com/7xHYQqUJd4

The Canadian Trucking Alliance, a federation of provincial trucking associations, “strongly disapproves of any protests on public roadways, highways, and bridges,” it said in a post on its website Saturday.

The convoy of truckers is travelling to Ottawa to protest new federal vaccine requirements for cross-border essential workers. The mandate requires Canadian truckers to be fully vaccinated in order to avoid a 14-day quarantine when returning from the United States.

“Basically for the last two years, we’ve had a Prime Minister who has vaccine derangement syndrome where every day he stands up at the stump and that’s all he talks about,” Fleury said.

Brandon University, which previously issued Fleury an honorary doctorate, called out Fleury for anti-vaccine comments last September, saying a statement made by the former NHL star was “reprehensible,” “beyond reasonable distrust,”  and “a stain on his legacy.”

“Fleury has turned his voice to launching personal and political attacks and to the espousing of conspiracy theories,” the University said in a statement.

“I’m a patriot,” Fleury said on Ingraham’s show. “And I want my freedom back.”

Canadian truck drivers need to meet pre-entry, testing, and quarantine requirements, and foreign truck drivers who are not fully vaccinated will be directed back to the United States.

“The Government of Canada and the United States have now made being vaccinated a requirement to cross the border. This regulation is not changing so, as an industry, we must adapt and comply with this mandate,” CTA president Stephen Laskowski said four days ago. “The only way to cross the border, in a commercial truck or any other vehicle, is to get vaccinated.”

Truckers had previously been exempt from quarantine requirements.

A GoFundMe for the Freedom Rally has currently raised over $5.6 million from more than 72,000 donors. GoFundMe said Tuesday that it was withholding the funds until organizers were able document how it would be distributed.

The CTA has indicated vaccination rates among truckers is in line with the rest of the population, with more than 85% of the 120,000 Canadian truck drivers who regularly cross the border are vaccinated.