Connectivity and accessibility on SkyTrain’s Canada Line could improve with the addition of four stations along the route.

The six-year-old, 19-kilometre rapid transit rail line was designed and built with the capability to add four ‘future’ stations with relative ease. Four sections of the track were engineered and built to allow for the construction of additional station structures.

Two of these possible stations are underground, slated for the Cambie Street corridor in Vancouver at 33rd Avenue and 57th Avenue. The other two stations will be elevated structures in Richmond, with one station at No. 3 Road and Capstan Way and another station on Sea Island to serve an expansion of the Vancouver International Airport terminal building.

These stations could be built within the next 20 years, spurred by major development projects adjacent to the station sites, and come at a minimal or zero cost to TransLink and other levels of government with construction largely funded by private sector partners.

Moreover, the inclusion of additional stations into the train network will not compromise the terminus to terminus travel time (Waterfront to Brighouse or YVR Airport) of 25 minutes. The Canada Line’s trains currently operate at slower speeds to maintain frequency schedules, but the trains are fully capable of running at significantly higher speeds without any modifications to the guideway’s design.

There are currently 16 stations along the whole Canada Line route.

Vancouver International Airport’s long-term master plan includes a possible fourth station for Sea Island. An additional station would be built as part of the proposed Northeast Terminal expansion, a project that would expand the airport terminal building to accommodate increased international and transborder growth.

A fourth station serving the terminal expansion would be located immediately east of the Canada Line’s track switches where the dual track merges into a single track for the final YVR Airport Station approach.

As the additional station is an airport requirement, the station’s construction costs would likely be funded by the Vancouver Airport Authority, which also covered the full $300-million cost to construct the Sea Island branch of the Canada Line. 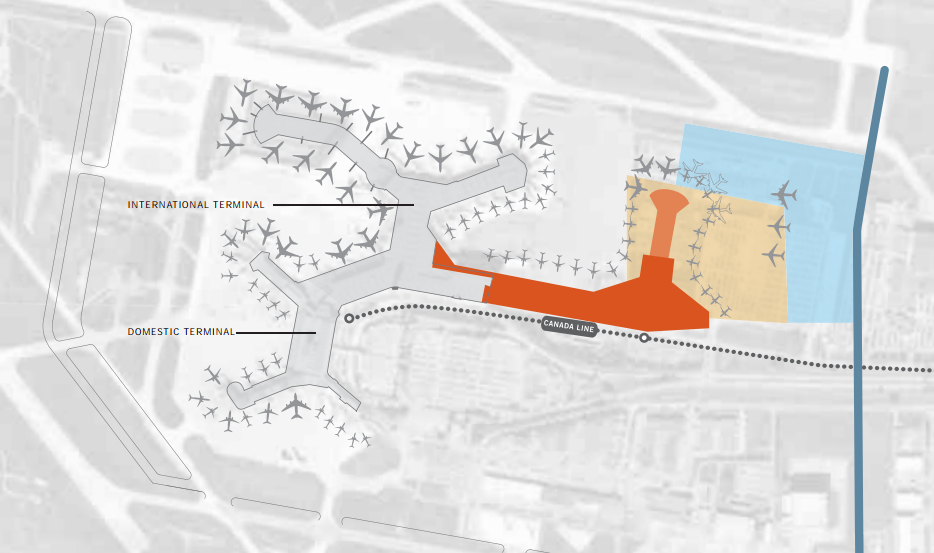 A Canada Line station at Capstan Way and No. 3 has been confirmed through a unique partnership with local developers in the Capstan Village area, including Concord Pacific and Pinnacle International, to fully fund the $25-million station construction cost.

The deal was announced in 2012 and would require the two developers to pay a fee of $7,800 per unit for their developments in the Capstan Village area. These fees will be paid when building permits are issued.

Approximately 3,250 units within two dozen mid-rises and high-rises are planned by the developers, and construction is already well underway for a number of the buildings.

Five developers are planning to build a total of 6,500 new residential units in the area, with nearly 3,000 new units approved or in the development application process. The high densities were permitted by Richmond City Council only after developers and TransLink promised o build a Canada Line station to serve the new neighbourhood.

Station construction is anticipated to begin in 2027 when funding for the project is fully allocated from developers. However, construction could begin earlier if the timelines for residential development projects are accelerated by strong demand for the units. 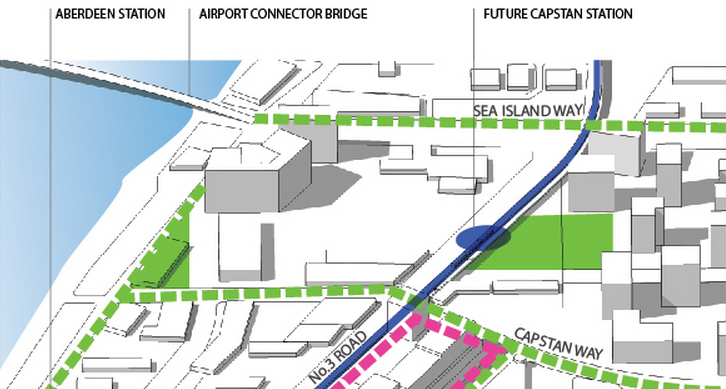 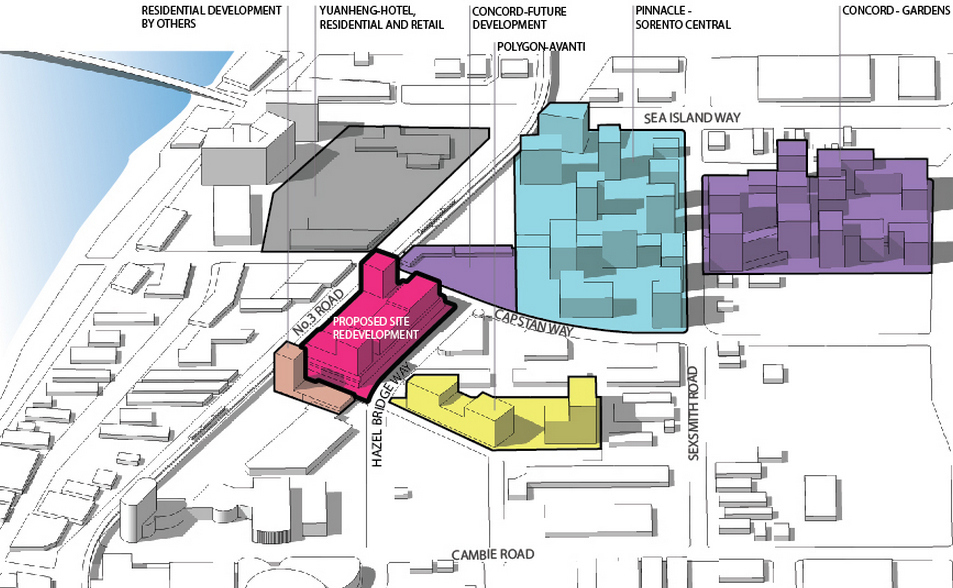 Density from a massive redevelopment project on Vancouver Coastal Health’s (VCH) Pearson Dogwood property will support the Canada Line station at 57th Avenue. Nearly 3,100 residential units and a new YMCA with an aquatic centre are planned for the 25.4 acre site.

VCH intends to use the revenue generated by the redevelopment project to fund the renewal, replacement and expansion of its on-site health care facilities. The health authority has already offered to help fund the construction of the new station, which is a requirement for the redevelopment’s scale. 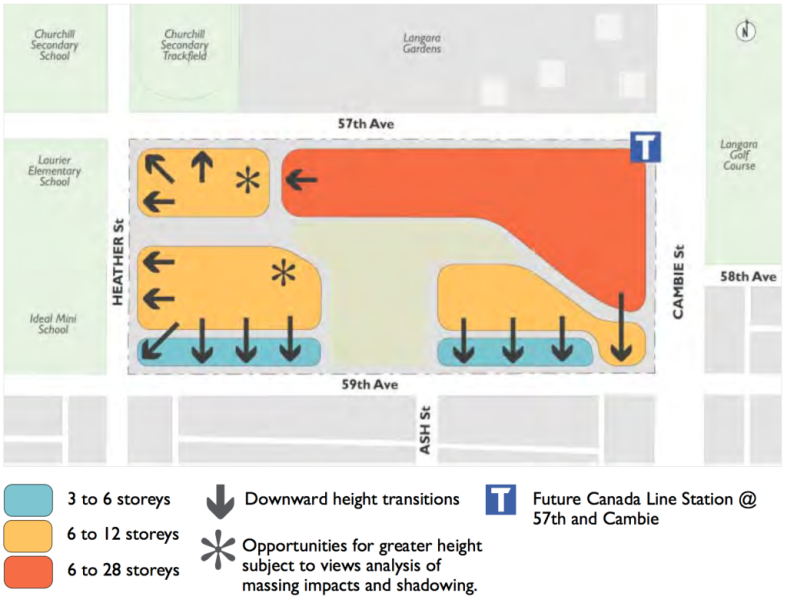 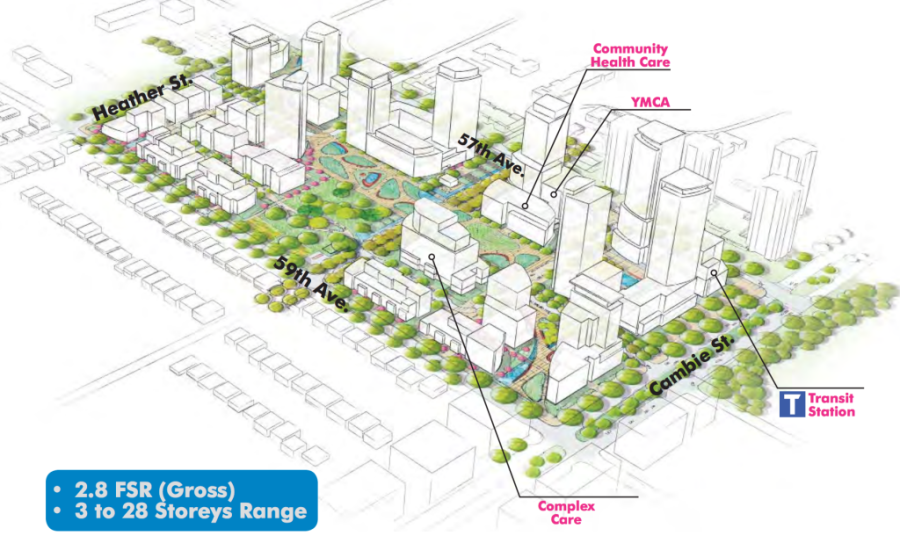 An underground station at 33rd Avenue and Cambie Street is dependent on whether adjacent developments in the area are large enough to necessitate the construction of a station, which would provide direct access to Queen Elizabeth Park and B.C. Children’s Hospital.

A number of low-rise developments are proposed, approved or in the process of being built along the Cambie Street corridor between King Edward and Oakridge-41st Avenue stations.

However, the feasibility of the station will likely be dependent on the the development potential of the former B.C. RCMP headquarters, a 21-acre site located west of the station. In 2014, the site was purchased by federal crown corporation Canada Lands Company and a consortium of the local First Nations for its development potential. A dense redevelopment project, similar to what has been proposed for the Pearson Dogwood site, could provide both the necessary funds and demand to support the station.

This station would likely be the most expensive future station to build given the deep underground depth of the station and the geology of the area. During the Canada Line’s cut-and-cover construction process, substantial blasting was required to remove volcanic rock along the line’s route next to Queen Elizabeth Park. 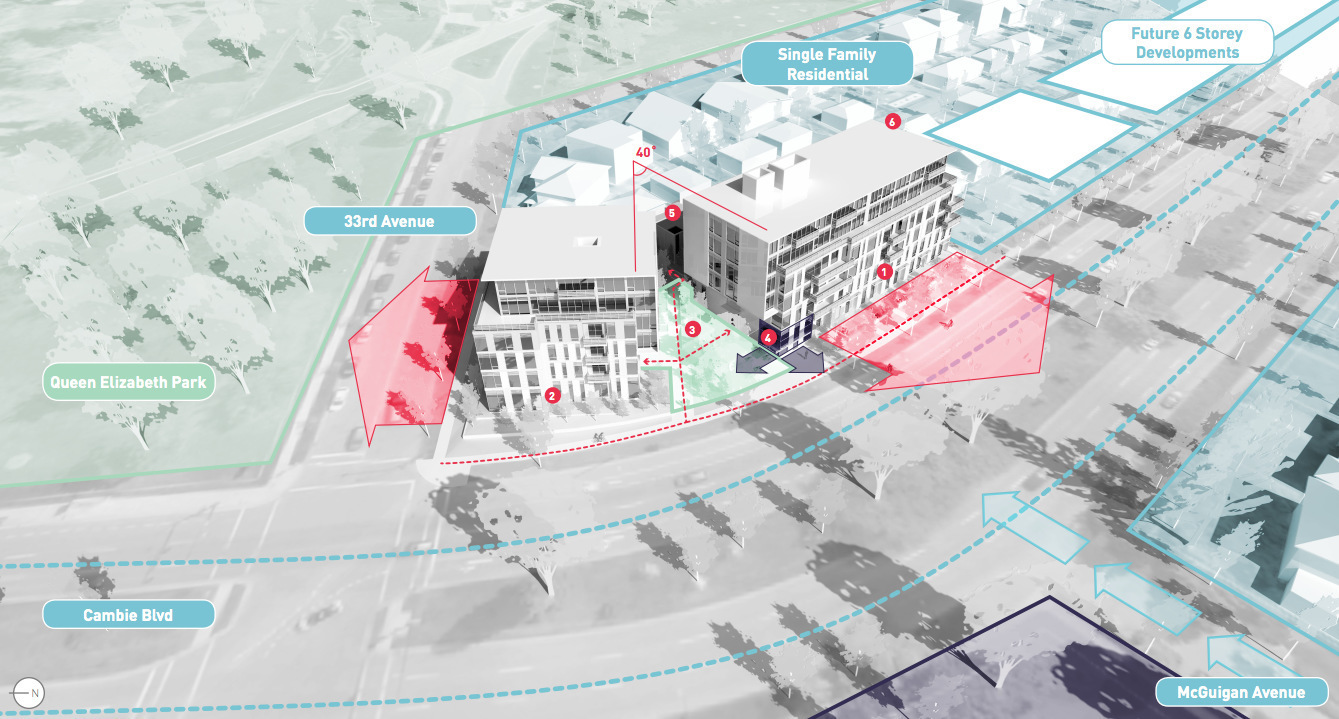