Local walking tour company Forbidden Vancouver is hosting “Secrets of the Penthouse” on June 8, calling it an evening of history, swing music, and Italian cuisine at Vancouver’s most notorious club.

The evening includes a guided tour where guests will be invited backstage to hear all the shocking details of the nightclub’s past. Club owner Danny Filippone will lead you on the tour, accompanied by two other guides: Aaron Chapman, author of “Liquor, Lust, and the Law” (nominated for the 2014 BC Book Prize), and Grant McDonald, retired Vancouver Police officer who raided the club in the ’60s and ’70s, and once arrested Filippone’s own father.

The evening is rounded off with live music from Goby Catt and the Catt Pack, and an Italian dinner, all included in the price of the ticket.

The Story of Vancouver’s Penthouse Nightclub

“That’s it everybody, see you all at the Penthouse!”

Those are the famous words quoted by Frank Sinatra as he concluded his sold out show at The Orpheum. The audience flooded out of the theatre, forming a line outside of the Penthouse that curved all the way back to Granville street.

The Penthouse has quite a history and has hosted many famous performers, including black musicians who were refused in other Vancouver venues. Ella Fitzgerald, Sammy Davis Jr., and Louis Armstrong all played on the Penthouse stage, often enjoying a post show drink with Penthouse patrons.

Up until 1968 liquor laws in Vancouver prevented patrons from drinking liquor in any club where entertainment was provided. Nightclub patrons had to brown bag their liquor in order to enjoy a drink out on the town. The Penthouse was a regular spot for VPD liquor raids at this time, cops busting through the doors with the club in full swing to fine any patrons found with a bottle. Visiting the club today, you can still see tables with hidden compartments where Penthouse guests would once hide their booze!

With history like this living in its walls, it’s devastating to think that just five years ago a fire almost put an end to the Penthouse. Thankfully, the Penthouse still survives and Forbidden Vancouver event Secrets of the Penthouse exists to tell its story. 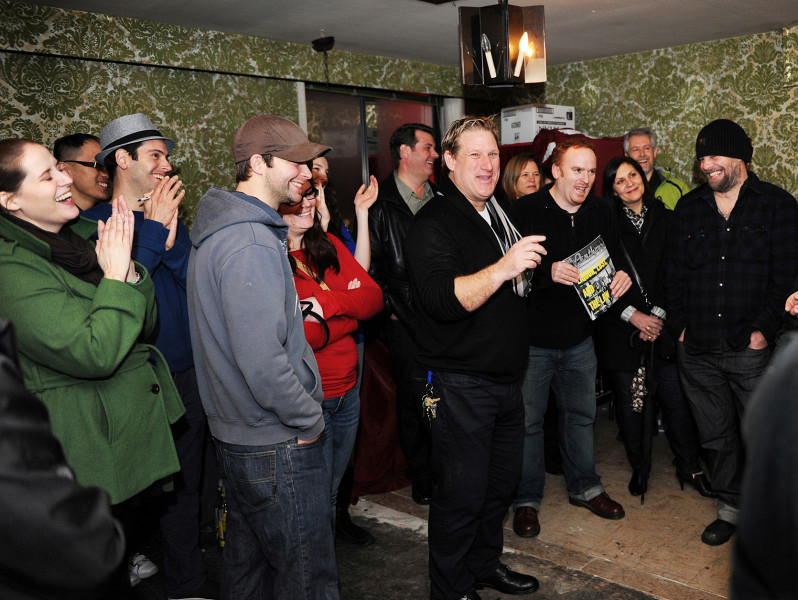 Danny Fillipone in full swing at Secrets of the Penthouse! Credit Rebecca Blissett.

To enter to win a pair of tickets to Secrets of the Penthouse (valued at $98), do at least one of the following:

Contest entries will be accepted from time and date of publishing until 4:59 p.m. PST on June 6, 2016. One winner will be chosen at random and contacted through the platform they used to enter.

Secrets of the Penthouse