The Foo Fighters are set to invade Rogers Arena Friday tonight for the first time since 2011, and as indicated by our setlist preview, they have an epic night in store for their Vancouver fans.

But before the band takes the stage, we’ve crunched their numbers and come up with some pretty interesting stuff. Nothing important – just some random trivia to impress your friends and annoy your co-workers with.

After being forced to reschedule shows due to Dave Grohl’s leg injury, the band returned to the U.K. last weekend and played an extended set with a little help from their very famous friends. The Foo Fighters were joined onstage by Led Zeppelin’s John Paul Jones and Queen’s Roger Taylor and performed a stunning cover of “Under Pressure,” a 1981 hit by David Bowie & Queen. Grohl, a Rock & Roll Hall of Famer himself, called the collective a “super-duper group” and told the crowd that he and his band “are living out our rock n’ roll fantasy.”

Grohl and the boys travelled across America, visiting eight legendary studios in eight different cities to record songs for the critically-acclaimed album. The process was filmed for an HBO docuseries of the same name, directed by Grohl who described the project as “a love letter to the history of American music.” Standout track “Subterranean” was recorded at Robert Lang Studios in Seattle, the same studio where Nirvana recorded their last song, “You Know You’re Right,” in 1994.

The “church” is famous for protesting outside of awards shows and military funerals. When they showed up outside of the band’s concert in Kansas City in August with picket signs, the Foo Fighters had the last laugh by piling onto a pickup truck and driving through their tiny protest with Rick Astley’s “Never Gonna Give You Up” blasting from a stereo. The group did the same thing to the church at a concert in 2011.

The band made their first network television appearance on Letterman’s show in 1995 and returned to the program several times over the last 20 years. When Letterman underwent heart surgery in 2000, he asked the Foo Fighters to perform “Everlong” on his first show back and introduced the guys as “my favourite band playing my favourite song.” The band was invited to return for Letterman’s very last program this summer and performed the song again over the show’s closing credits.

845 – total number of times the band has performed “Everlong” live

According to setlist.fm, “Everlong” is by far the band’s favourite song to perform live (Vancouver fans can expect the group to open Friday night’s show with the tune). The Foo Fighters have performed “Monkey Wrench” 786 times and “My Hero” 741 times.

The Foo Fighters recorded a kickass version of Prince’s “Darling Nikki” and the song got major airplay on L.A. radio station KROQ. Grohl reached out to Prince in hopes of releasing the cover on a Foo Fighters DVD but was turned down flat. The Purple One would eventually make amends with the band by including their song “Best Of You” in his Super Bowl medley in 2007.

According to the bible of useless trivia, Wikipedia, “foo fighter” was a term used by Allied aircraft pilots in World War II to describe UFOs spotted in European or Pacific theaters of operations.

Dave Grohl recorded the album solo, with the exception of a guest guitar spot by Greg Dulli. When Foo Fighters started climbing the charts, Grohl put together a band for touring purposes and two of the guys eventually became Foo Fighters full-time.

Grohl came up with the riff to “Scentless Apprentice” and wrote “Marigold” (which was released as the b-side to “Heart Shaped Box”), but pretty much left Nirvana’s songwriting duties to lead singer Kurt Cobain. “You don’t want to confuse the songwriting process when you’re in a band like that with the greatest songwriter in the world,” Grohl said. Once Nirvana was finished, Grohl found solace in writing and recording material he’d written himself. “It was the one thing I realized was going to help me get on with life, to try something new and to challenge myself rather than just become a drummer of another band.”

The band holds the record for the most wins in this category, followed by Sheryl Crow and U2 who have taken home the trophy twice. The Foo Fighters also share the record for the most Best Rock Album nominations with six; 1996’s The Colour and the Shape lost to John Fogerty’s Blue Moon Swamp, and 2005’s In Your Honor lost to U2’s How To Dismantle An Atomic Bomb. 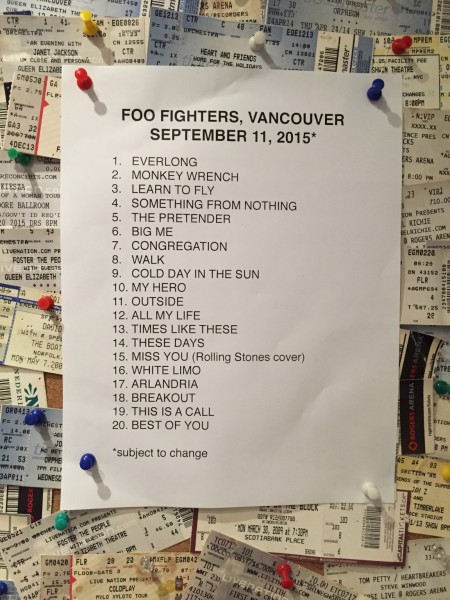